NASA engineers are working on a new family of space robots that can roll, climb, and use artificial intelligence to navigate around obstacles in rough terrains on other worlds. Meet the family, here.

The climbing robot LEMUR rests after scaling a cliff in Death Valley, California in early 2019. The robot uses special gripping technology that has helped lead to a series of new, off-roading robots that can explore other worlds. Image via NASA/JPL-Caltech.

From uncovering the first clues of liquid water on Mars to crossing our solar system, NASA’s missions have been adventurous, to say the least. Ranger 3 was NASA’s first attempt to land a rover on the moon in 1962. Since then, numerous robots have followed Ranger 3 from Earth into space. Yet the surfaces of planets and moons in our solar system remain largely unexplored, partly because current space robots haven’t been capable of scaling cliffs, gripping icy surfaces and otherwise conquering hard-to-reach places.

This month (July 10, 2019), NASA’s Jet Propulsion Laboratory described its work on a new family of robots that can roll, climb, and use artificial intelligence (AI) to navigate around obstacles in rough terrains. These robots are currently being tested on Earth and will later be sent to places that are otherwise inaccessible by humans, helping scientists do meaningful science along the way.

A tiny climbing robot rolls up a wall, gripping with fishhooks – technology adapted from LEMUR’s gripping feet. Image via NASA/JPL-Caltech.

This new class of space robots will have functionalities inspired by the Limbed Excursion Mechanical Utility Robot (LEMUR), which was originally conceived as a repair robot for the International Space Station. In the video below, NASA describes LEMUR’s last field test, in Death Valley, California, in early 2019. The robot used hundreds of fishhooks to climb walls and AI to avoid obstacles that it could not climb. It also used its suite of scientific instruments to scan the rock for ancient fossils, and, as the video explains, it found some!

A direct application of this LEMUR field test would be searching for biosignatures – substances that provide evidence of life – on the planet Mars, perhaps in lake beds thought to hold signs of Martian life from the distant past.

While the LEMUR itself will not be sent into space, the engineers did adopt much of its AI and structural features into the next generation of robots that will act as our eyes and ears beyond Earth. Each one of them has unique features built into it to tackle harsh conditions and uncertain environments. Keep reading, to meet this new generation of space explorers. 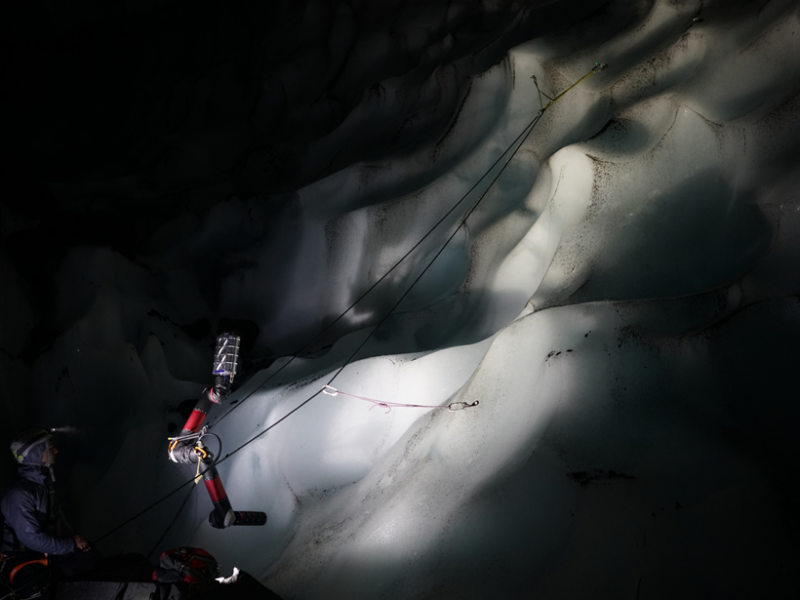 Ice Worm was put to its first field test in the cave walls at Mount St. Helens in August 2018. The robot was belayed with a rope to ensure that it wasn’t damaged if it fell. Image via NASA/JPL-Caltech.

Engineers at NASA’s Jet Propulsion Laboratory in Pasadena, California, are developing a robot called Ice Worm in an attempt to navigate slippery surfaces. True to its name, the robot – adapted from a single limb of LEMUR – compacts its body before extending it to move forward. It proceeds an inch at a time by drilling one end of a limb into an icy surface, uses a grip to steady itself, then brings in the second limb to join the first using the same technique.

To move forward, it unscrews one foot, lengthens its body and screws it back into the ice a few meters ahead. Using the pressure sensors that instruct it how hard to drill into the ice, it repeats this over and over again to “inchworm” forward. Ice Worm also uses this method to anchor itself while analyzing the surface beneath to collect material in its legs that can be used to test salinity concentrations for microbial life.

Aaron Parness, an engineer at JPL, has trained Ice Worm in the remote regions of Antarctica, which is the harshest place they could find on Earth. The slippery ice coupled with the harsh environment will prepare the robot for similar conditions on the moons of Jupiter and Saturn. Another set of tests are lined up in glaciers on Mt. Rainier in Seattle. Parness commented:

Field testing shows you things that are hard to learn in the laboratory.

This 1.4-meter (4.6 foot) long robot is also being equipped with pattern recognition and machine learning – aspects of AI that allow it to learn from past mistakes and make optimal decisions. The robot will need to investigate patterns left behind by life in cave formations. In order to do so, it needs to be tiny and mobile enough to scuttle through the cave’s tiny gaps. For this, Parness and his team are working on miniaturized remote sensing and data analysis instruments that Ice Worm can wear like a backpack. Once ready, robots of this kind will be sent to the icy moons of Saturn and Jupiter to bring back samples for further analyses. 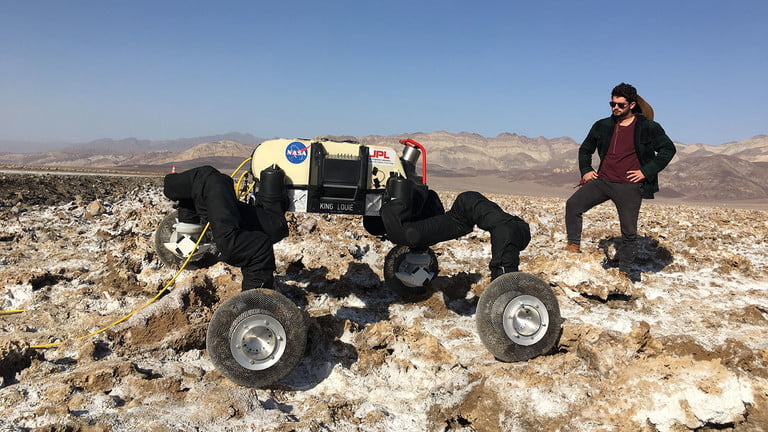 RoboSimian during a field test in California. Image via NASA/JPL-Caltech.

While this four-legged robot is also inspired by LEMUR in its size and build, RoboSimian has supple wheels made of music wire in contrast to LEMUR’s gripping ones, thus having greater flexibility on rough terrains. This concept first materialized as a part of the DARPA Robotics Challenge, which promoted robotic technology for disaster-response operations. The robot is built and trained to operate in dangerous environments, so it’s not surprising that RoboSimian – a four-legged robot that can walk, crawl, slide on its belly, and even do cartwheels – will most likely be sent to Saturn’s moon Enceladus. Saltwater oceans are theorized to be present under the icy surface of that distant moon. Its geysers may also contain signs of microbial life.

Nicknamed King Louie after a character in the film “Jungle Book,” RoboSimian is equipped with spectroscopic instruments that could explore Enceladus’ polar regions. 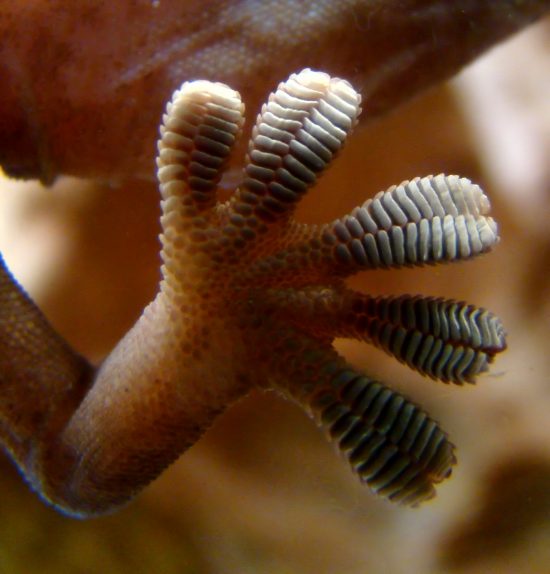 NASA engineers were inspired by gecko feet, such as the one shown here, in designing a gripping system for space. Just as a gecko’s foot has tiny adhesive hairs, so the JPL devices incorporate small structures that work in similar ways. Image via NASA/Wikimedia Commons.

You can use tape only so many times before the adhesion wears off. Geckos, on the other hand, offer inspiration for glues that stick even after multiple uses. These tiny lizards have hair on their feet that allow them to cling to a wall with ease. Parness and his team designed a robot with similar features – gecko-inspired adhesives – synthetic hair that sticks to any surface.

These grippers can sustain up to 150 Newtons of force and have been tested in simulated microgravity environments. The gecko material itself was tested 300,000 times to make sure the stickiness does not wear off. This robot will one day repair satellites, service them, and even snatch space garbage. 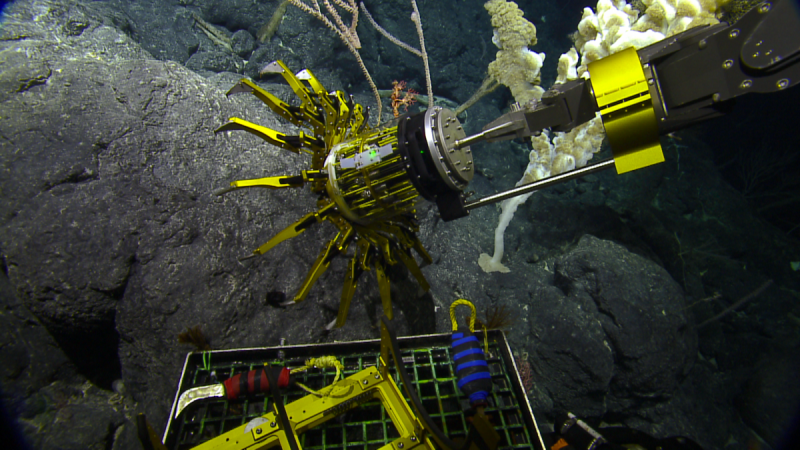 Yet another robot inspired by LEMUR, the Underwater Gripper, adopted LEMUR’s 16 fingers and 250 fishhooks to hold on tightly to surfaces and drill into formations. This is particularly useful in environments where there is little to no gravity, especially underwater where the force of the drill could push the robot away.

As of now the robot is working with Nautilus – an underwater research vessel – to collect samples from water that are a mile below the surface. Eventually, it might be sent to explore the surfaces of asteroids and other similar bodies. 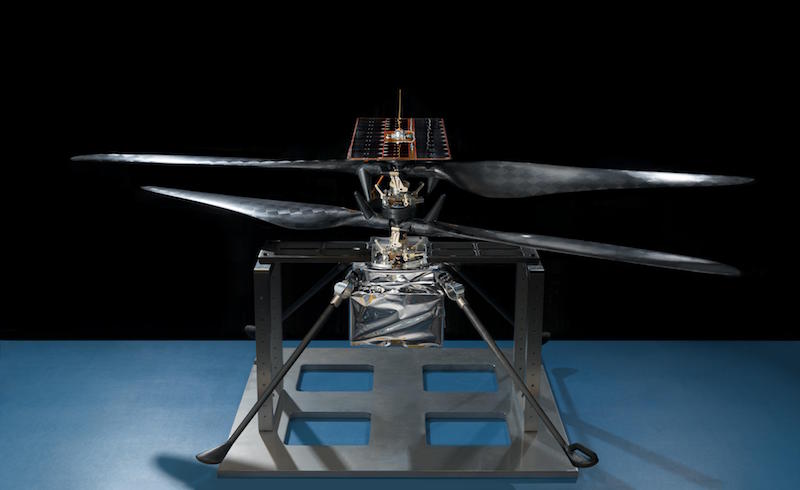 A helicopter that will do more than just fly

A tiny, solar-powered helicopter will accompany the Mars 2020 rover. Arash Kalantari, a JPL engineer, modified LEMUR’s design to build a robot that lands not just horizontally, but also vertically by clinging to rocks like a dragonfly.

Nobody’s built a Mars Helicopter before, so we are continuously entering new territory.

The Mars Helicopter is expected to reach Mars by February 2021 and will conduct geological assessments on the landing sites, assess natural resources and hazards for future space missions.

Read more about the Mars Helicopter

Bottom line: A new class of space robots have functionalities inspired by the Limbed Excursion Mechanical Utility Robot (LEMUR). While each design is unique in its abilities, there is one common goal that unites them all: the hunt for life beyond Earth.