Check out this interesting eclipse of the sun by Earth’s moon on March 6. A NASA spacecraft saw it. During the eclipse, the moon appears to reverse its direction!

A timelapse showing the unusual eclipse of the sun by the moon, as seen from NASA’s Solar Dynamics Observatory on March 6. In reality, the eclipse lasted about four hours. From SDO’s vantage point, the moon appeared to pause and reverse direction. Image via NASA/ Goddard/ SDO/ Phys.org

March 6, 2019 brought another new moon – a moon more or less between us and the sun in its monthly orbit – and although no solar eclipse was visible from Earth’s surface this time, a NASA space observatory was able to see an amazing eclipse from its vantage point in space, some 22,241 miles (35,793 km) from Earth. NASA’s Solar Dynamics Observatory (SDO) not only captured a solar eclipse, but it also saw the moon cross the sun’s face, then reverse its direction and cross from the other side.

Of course, the moon did not move in reverse; it was SDO’s motion in its orbit that made the moon to appear to retrace its steps in front of the sun. How is that possible?

SDO – which has been observing our sun continuously since 2010 – moves around the Earth in a circular, geosynchronous orbit. As it does so, it has eclipse seasons, that is, a several-week period during which Earth briefly blocks SDO’s view of the sun each day. The most recent eclipse season began on February 6, 2019.

The apparent movement of the moon during the March 6 eclipse (which wasn’t a full eclipse, and might also be called a transit of the moon in front if the sun) is related to a change in perspective called parallax. It’s the same shift you see if you hold up a finger at arm’s length and close first one eye, and then the other.

Look at the illustration below. It shows SDO’s orbit as the yellow circle around Earth. As the satellite is observing the sun while moving from the 12’clock position to the 9’clock position in the yellow circle, the moon will appear to move to the right in front of the sun. As soon as SDO moves from 9’clock to 6’clock, the moon will appear to move in reverse to the left, due to parallax. 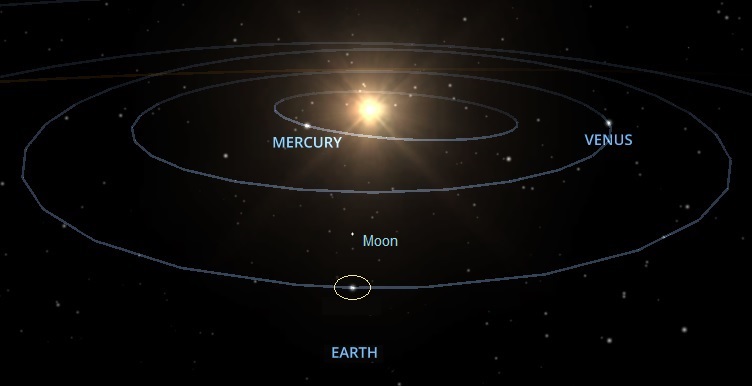 Orbit of SDO in yellow. Orbits, motion examples, objects and distances, are not to scale, and are for illustrative purposes only. Illustration by Solarsystemscope with additions by Eddie Irizarry.

It was a nice partial solar eclipse, almost an annular – or ring – type, but seen from space.

Read more about this eclipse via Phys.org and NASA JPL.

And here’s another view of the March 6 eclipse seen from SDO, below. Enjoy!

Bottom line: On March 6, 2019 – as viewed from NASA SDO – the moon crossed in front of the sun, paused, and then crossed back in the opposite direction.

Dates of lunar and solar eclipses (from Earth) in 2019

When is the next total solar eclipse for North America?