Monday’s total solar eclipse will give scientists a rare opportunity to study the lower regions of the sun’s corona. Here’s what NASA scientists will be investigating. 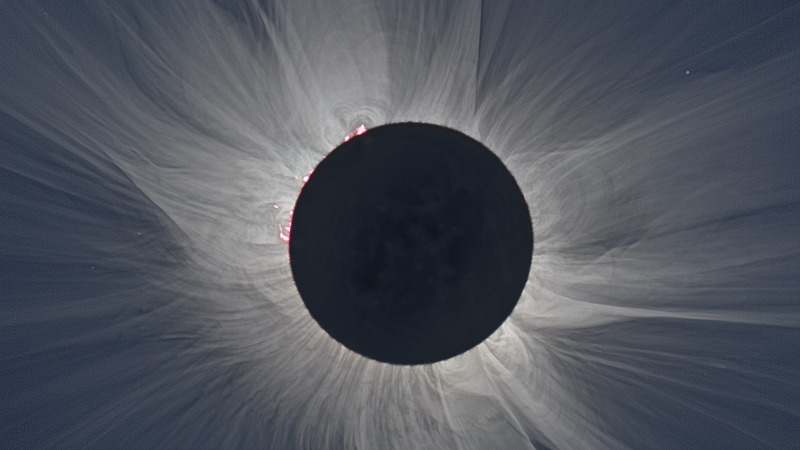 A total solar eclipse gives scientists a rare opportunity to study the lower regions of the sun’s corona. These observations can help us understand solar activity, as well as the unexpectedly high temperatures in the corona. Image via NASA/S. Habbal, M. Druckmüller and P. Aniol.

A total solar eclipse happens somewhere on Earth about once every 18 months. But because Earth’s surface is mostly ocean, most eclipses are visible over land for only a short time, if at all. The total solar eclipse of August 21, 2017, is different – its path stretches over land for nearly 90 minutes, giving scientists an unprecedented opportunity to make scientific measurements from the ground.

When the moon moves in front of the sun on August 21, it will completely obscure the sun’s bright face. This happens because of a celestial coincidence – though the sun is about 400 times wider than the moon, the moon on August 21 will be about 400 times closer to us, making their apparent size in the sky almost equal. In fact, the moon will appear slightly larger than the sun to us, allowing it to totally obscure the sun for more than two and a half minutes in some locations. If they had the exact same apparent size, the total eclipse would only last for an instant.

A total solar eclipse lets NASA researchers try out technology that could one day aid in the development of future missions, however, they must flawlessly complete the experiment in a few short minutes, two to be exact. Via NASA’s Goddard Space Flight Center/Genna Duberstein.

The eclipse will reveal the sun’s outer atmosphere, called the corona, which is otherwise too dim to see next to the bright sun. Though we study the corona from space with instruments called coronagraphs – which create artificial eclipses by using a metal disk to block out the sun’s face – there are still some lower regions of the sun’s atmosphere that are only visible during total solar eclipses. Because of a property of light called diffraction, the disk of a coronagraph must block out both the sun’s surface and a large part of the corona in order to get crisp pictures. But because the moon is so far away from Earth – about 230,000 miles away during the eclipse – diffraction isn’t an issue, and scientists are able to measure the lower corona in fine detail.

NASA is taking advantage of the August 21, 2017, eclipse by funding 11 ground-based science investigations across the United States. Six of these focus on the sun’s corona.

The source of space weather

Our sun is an active star that constantly releases a flow of charged particles and magnetic fields known as the solar wind. This solar wind, along with discrete burps of solar material known as coronal mass ejections, can influence Earth’s magnetic field, send particles raining down into our atmosphere, and – when intense – impact satellites. Though we’re able to track these solar eruptions when they leave the sun, the key to predicting when they’ll happen could lie in studying their origins in the magnetic energy stored in the lower corona.

A team led by Philip Judge of the High Altitude Observatory in Boulder, Colorado, will use new instruments to study the magnetic field structure of the corona by imaging this atmospheric layer during the eclipse. The instruments will image the corona to see fingerprints left by the magnetic field in visible and near-infrared wavelengths from a mountaintop near Casper, Wyoming. One instrument, POLARCAM, uses new technology based on the eyes of the mantis shrimp to obtain novel polarization measurements, and will serve as a proof-of-concept for use in future space missions. The research will enhance our understanding of how the sun generates space weather. Judge said:

We want to compare between the infrared data we’re capturing and the ultraviolet data recorded by NASA’s Solar Dynamics Observatory and JAXA/NASA’s Hinode satellite. This work will confirm or refute our understanding of how light across the entire spectrum forms in the corona, perhaps helping to resolve some nagging disagreements.

The results from the camera will complement data from an airborne study imaging the corona in the infrared, as well as another ground-based infrared study led by Paul Bryans at the High Altitude Observatory. Bryans and his team will sit inside a trailer atop Casper Mountain in Wyoming, and point a specialized instrument at the eclipse. The instrument is a spectrometer, which collects light from the sun and separates each wavelength of light, measuring their intensity. This particular spectrometer, called the NCAR Airborne Interferometer, will, for the first time, survey infrared light emitted by the solar corona. Bryant said:

These studies are complementary. We will have the spectral information, which reveals the component wavelengths of light. And Philip Judge’s team will have the spatial resolution to tell where certain features are coming from.

This novel data will help scientists characterize the corona’s complex magnetic field — crucial information for understanding and eventually helping to forecast space weather events. The scientists will augment their study by analyzing their results alongside corresponding space-based observations from other instruments aboard NASA’s Solar Dynamics Observatory and the joint NASA/JAXA Hinode.

In Madras, Oregon, a team of NASA scientists led by Nat Gopalswamy at NASA’s Goddard Space Flight Center in Greenbelt, Maryland, will point a new, specialized polarization camera at the sun’s faint outer atmosphere, the corona, taking several-second exposures at four selected wavelengths in just over two minutes. Their images will capture data on the temperature and speed of solar material in the corona. Currently these measurements can only be obtained from Earth-based observations during a total solar eclipse.

To study the corona at times and locations outside a total eclipse, scientists use coronagraphs, which mimic eclipses by using solid disks to block the sun’s face much the way the moon’s shadow does. Typical coronagraphs use a polarizer filter in a mechanism that turns through three angles, one after the other, for each wavelength filter. The new camera is designed to eliminate this clunky, time-consuming process, by incorporating thousands of tiny polarization filters to read light polarized in different directions simultaneously. Testing this instrument is a crucial step toward improving coronagraphs and ultimately, our understanding of the corona — the very root of the solar radiation that fills up Earth’s space environment.

NASA’s Solar and Heliospheric Observatory, or SOHO, constantly observes the outer regions of the sun’s corona. During the Aug. 21, 2017, eclipse, scientists will observe the lower regions of the sun’s corona to better understand the source of solar explosions called coronal mass ejections, as well as the unexpectedly high temperatures in the corona. Image via ESA/NASA/SOHO.

The answer to another mystery also lies in the lower corona: It is thought to hold the secrets to a longstanding question of how the solar atmosphere reaches such unexpectedly high temperatures. The sun’s corona is much hotter than its surface, which is counterintuitive, as the sun’s energy is generated by nuclear fusion at its core. Usually temperatures go down consistently as you move away from that heat source, the same way that it gets cooler as you move away from a fire – but not so in the case of the sun’s atmosphere. Scientists suspect that detailed measurements of the way particles move in the lower corona could help them uncover the mechanism that produces this enormous heating.

Mapping the inner corona in polarized light to reveal the density of elections is a critical factor in modeling coronal waves, one possible source of coronal heating. Along with unpolarized light images collected by the NASA-funded citizen science project called Citizen CATE, which will gather eclipse imagery from across the country, these polarized light measurements could help scientists address the question of the solar corona’s unusually high temperatures.

Shadia Habbal of the University of Hawaii’s Institute for Astronomy in Honolulu will lead a team of scientists to image the sun during the total solar eclipse. The eclipse’s long path over land allows the team to image the sun from five sites across four different states, about 600 miles apart, allowing them to track short-term changes in the corona and increasing the odds of good weather.

They will use spectrometers, which analyze the light emitted from different ionized elements in the corona. The scientists will also use unique filters to selectively image the corona in certain colors, which allows them to directly probe into the physics of the sun’s outer atmosphere.

With this data, they can explore the composition and temperature of the corona, and measure the speed of particles flowing out from the sun. Different colors correspond to different elements — nickel, iron and argon — that have lost electrons, or been ionized, in the corona’s extreme heat, and each element ionizes at a specific temperature. By analyzing such information together, the scientists hope to better understand the processes that heat the corona.

Amir Caspi of the Southwest Research Institute in Boulder, Colorado, and his team will use two of NASA’s WB-57F research jets take observations from twin telescopes mounted on the noses of the planes. They will ­­­­­capture the clearest images of the sun’s outer atmosphere — the corona — to date and the first-ever thermal images of Mercury, revealing how temperature varies across the planet’s surface. Read more about this study here.

Bottom line: NASA scientists will study the sun’s atmosphere at the total solar eclipse of August 21, 2017.