Enhanced color image showing where Curiosity rover zigzagged to avoid obstacles as it made its way across the primeval red desert sands of Mars. 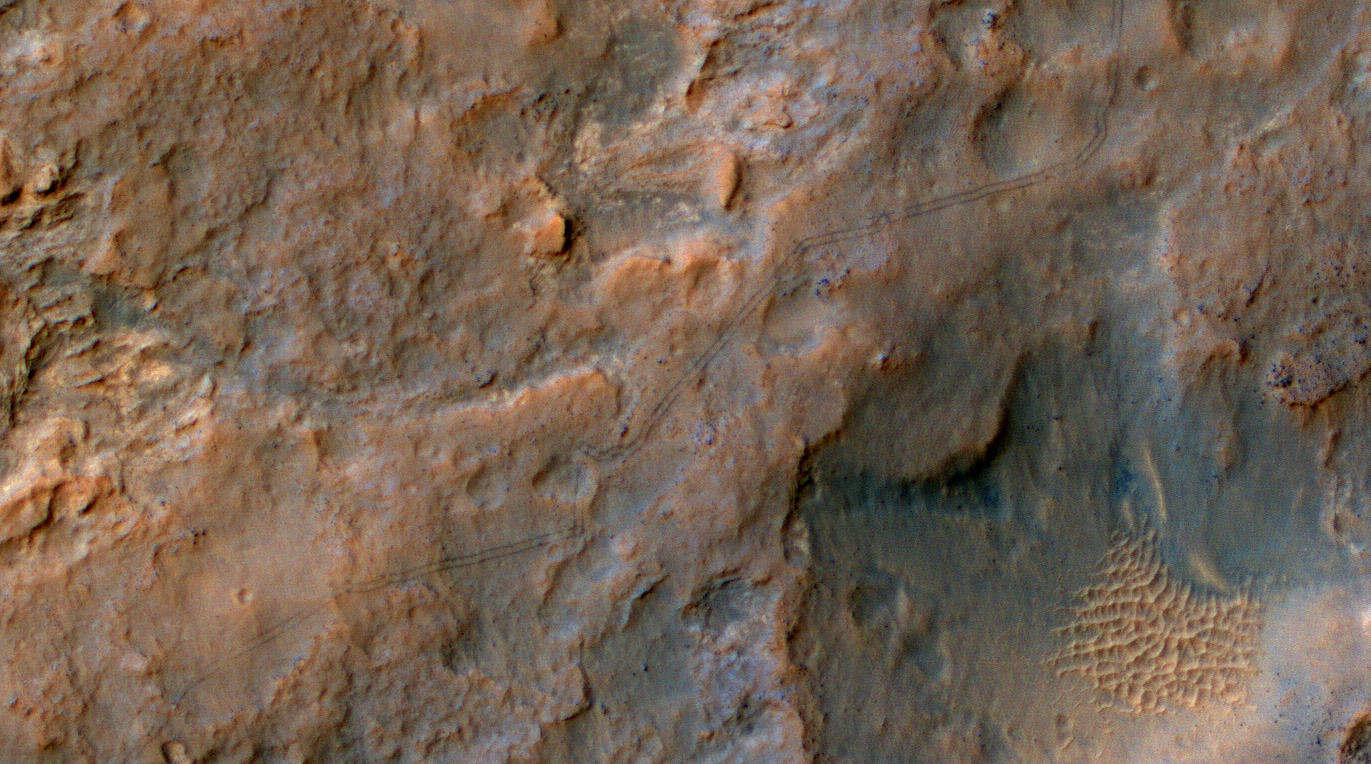 View larger. | Two parallel tracks left by the wheels of NASA’s Curiosity Mars rover cross rugged ground in this portion of a Dec. 11, 2013, observation by the High Resolution Imaging Science Experiment (HiRISE) camera on NASA’s Mars Reconnaissance Orbiter. The rover itself does not appear in this part of the HiRISE observation.

From the time it landed on Mars on August 5, 2012 – until a Mars orbiter captured this image on December 11, 2013 – NASA’s Curiosity had driven about 2.86 miles (4.61 kilometers) on the surface of Mars. This enhanced color image shows where the rover zigzagged to avoid steep slopes and other obstacles as it made its way across Mars’ primeval red desert sands, heading toward the lower slopes of Mount Sharp, the central peak of the Gale Crater, where Curiosity set down. NASA said:

Curiosity is progressing from a bright dust-covered area to a region with a darker surface, where windblown sand scours the surface relatively free of dust. For scale, the two parallel lines of the wheel tracks are about 10 feet (3 meters) apart.

The image came from HiRISE, one of six instruments on NASA’s Mars Reconnaissance Orbiter. Does it thrill you, or bother you, that we humans are making tracks on Mars? If it does bother you at all, remember that Mars isn’t like Earth’s moon. It isn’t airless. Mars has winds and weather and likely soon will cover Curiosity’s tracks with blowing dust.

Bottom line: The HiRISE camera on NASA’s Mars Reconnaissance Orbiter captured a wonderful image of tracks on Mars, made by the Curiosity rover between August 2012 and December 2013.

Read more from NASA about Curiosity’s tracks on Mars