After cruising along behind NASA’s InSight for 7 months, the 2 briefcase-sized spacecraft successfully relayed data back down to Earth from Insight during its descent to the Martian surface on Monday, November 26. 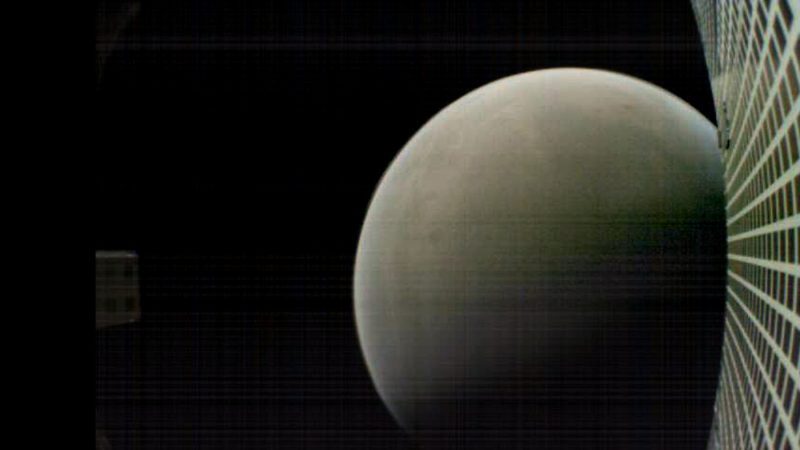 MarCO-B, one of the experimental Mars Cube One (MarCO) CubeSats, took this image of Mars from about 4,700 miles (6,000 km) away during its flyby of the red planet on November 26, 2018. MarCO-B was flying by Mars with its twin, MarCO-A, to attempt to serve as communications relays for NASA’s InSight spacecraft as it landed on Mars. Image via NASA/JPL-Caltech.

NASA’s MarCO mission was built to see whether two experimental, briefcase-sized spacecraft could survive the trip to deep space, and the two CubeSats proved more than able. After cruising along behind NASA’s InSight for seven months, they successfully relayed data back down to Earth from the lander during its descent to the Martian surface yesterday (Monday, November 26, 2018).

Nicknamed “EVE” and “WALL-E” after the stars of the 2008 Pixar film, MarCO-A and MarCO-B used experimental radios and antennas, providing an alternate way for engineers to monitor the landing. The CubeSats provided information to InSight’s landing team in just eight minutes – the time it took for radio signals to travel from Mars to Earth. That was much faster than waiting on NASA’s Mars orbiters, which weren’t positioned to be able to observe the entire event and send data back to Earth immediately.

WALL-E and EVE performed just as we expected them to. They were an excellent test of how CubeSats can serve as ‘tag-alongs’ on future missions, giving engineers up-to-the-minute feedback during a landing.

Landing on Mars is exceptionally difficult: Before InSight, only about 40 percent of all attempts by various nations had succeeded. Even if a spacecraft doesn’t survive landing, having a “black box” – or a pair of them, as with MarCO – to record the event can help engineers design better landing technology.

Neither of the MarCO CubeSats carry science instruments, but that didn’t stop the team from testing whether future CubeSats could perform useful science at Mars. As MarCO-A flew by, it conducted some impromptu radio science, transmitting signals through the edge of Mars’ atmosphere. Interference from the Martian atmosphere changes the signal when received on Earth, allowing scientists to determine how much atmosphere is present and, to some degree, what it’s made of.

CubeSats have incredible potential to carry cameras and science instruments out to deep space. They’ll never replace the more capable spacecraft NASA is best known for developing. But they’re low-cost ride-alongs that can allow us to explore in new ways.

As a bonus, some consumer-grade cameras aboard MarCO provided “drive-by” images as the CubeSats sailed past Mars. MarCO-B was programmed to turn so that it could image the planet in a sequence of shots as it approached Mars (before launch, MarCO-A’s cameras were found to be either non-functioning or too blurry to use).

After the landing, MarCO-B turned backward to take a farewell shot of the red planet. It also attempted to snap some photos of Mars’ moons, Phobos and Deimos.

Bottom line: The 2 briefcase-sized CubeSats successfully relayed data back down to Earth from Insight during its descent to the Martian surface on Monday, November 26, 2018.

Bottom line: NASA heard from the MarCO CubeSats loud and clear from Mars on November 26, 2018.