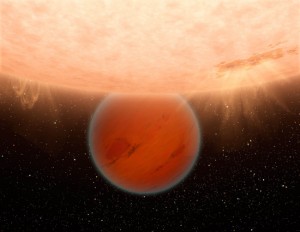 NASA’s Spitzer Space Telescope has found evidence that a hot, Neptune-sized planet orbiting a star beyond our sun lacks methane — an ingredient common to many planets in our own solar system. The planet illustrated here, called GJ 436b is about 980 degrees Fahrenheit (527 degrees Celsius) – it was expected to have methane but Spitzer’s observations showed it does not.
CREDIT: NASA/JPL-Caltech

Thank you! Your submission has been received!
Oops! Something went wrong while submitting the form.
END_OF_DOCUMENT_TOKEN_TO_BE_REPLACED