NASA’s Scott Kelly and cosmonauts Sergey Volkov and Mikhail Kornienko landed safely in Kazakhstan on March 2. The landing wraps up Kelly’s one-year mission aboard the ISS. 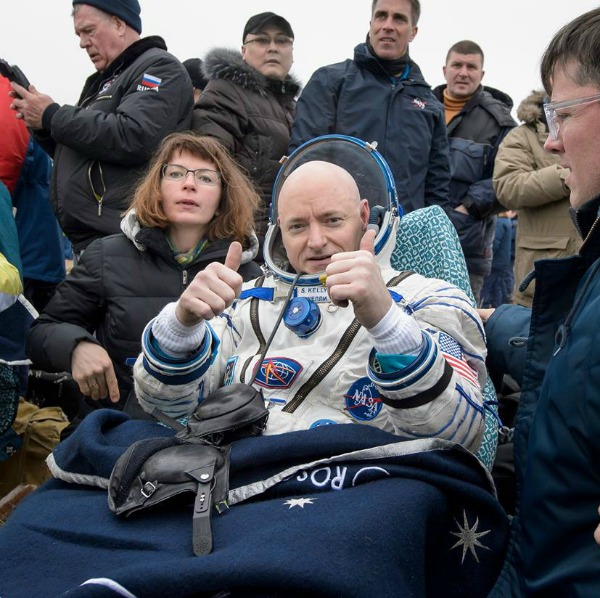 Two thumbs up from NASA Astronaut Scott Kelly, seen resting in a chair outside of the spacecraft just minutes after he and Russian cosmonauts Mikhail Kornienko and Sergey Volkov of Roscosmos landed in a remote area near the town of Zhezkazgan, Kazakhstan on Wednesday, March 2, 2016 (Kazakh time). Photo: NASA/Bill Ingalls

The return to Earth wrapped up a 340-day mission aboard the International Space Station (ISS) for Kelly and Kornienko, during which they gathered valuable biomedical data on the long duration effects of weightlessness on the human body that will be used to formulate a human mission to Mars.

Joining their return trip aboard a Soyuz TMA-18M spacecraft was Sergey Volkov, also of the Russian space agency Roscosmos, who arrived on the station September 4, 2015.

Scott has become the first American astronaut to spend a year in space, and in so doing, helped us take one giant leap toward putting boots on Mars.

During the record-setting One-Year mission, the station crew conducted almost 400 investigations to advance NASA’s mission and benefit all of humanity. Kelly and Kornienko specifically participated in a number of studies to inform NASA’s Journey to Mars, including research into how the human body adjusts to weightlessness, isolation, radiation and the stress of long-duration spaceflight. Kelly’s identical twin brother, former NASA astronaut Mark Kelly, participated in parallel twin studies on Earth to help scientists compare the effects of space on the body and mind down to the cellular level.

With the end of this mission, Kelly now has spent 520 days in space, the most among U.S. astronauts. Kornienko has accumulated 516 days across two flights, and Volkov has 548 days on three flights.

Expedition 47 continues operating the station, with NASA astronaut Tim Kopra in command. Kopra, Tim Peake of ESA (European Space Agency) and Yuri Malenchenko of Roscosmos will operate the station until the arrival of three new crew members in about two weeks. The ISS has been continuously occupied since November 2000 and, since then, has been visited by more than 200 people and a variety of international and commercial spacecraft.

More info about the One-Year mission