Posted by Deborah Byrd and Beth Lebwohl in Space | September 15, 2011

The Space Launch System is a new heavy-lift launch vehicle planned by NASA, similar to the Saturn V rockets that launched men toward the moon 40 years ago.

NASA Administrator Charles Bolden said on September 14, 2011, that NASA is ready to move forward with the development of the Space Launch System – an advanced heavy-lift launch vehicle that will provide a new national capability for human exploration beyond Earth’s orbit.

Video: What the SLS launch will look like. Artist’s conception.

The Space Launch System, or SLS, will be designed to carry a crew vehicle, cargo, equipment and science experiments to Earth’s orbit and destinations beyond. NASA says SLS will also serve as a backup for commercial and international partner transportation services to the International Space Station. Administrator Bolden indicated that the first launch of a crew via this new rocket is expected in 2021. He added:

President Obama challenged us to be bold and dream big, and that’s exactly what we are doing at NASA. While I was proud to fly on the space shuttle, kids today can dream of one day walking on Mars.

The SLS rocket will cost $35 billion to design and build. In its earlier versions, the rocket will be able to lift 70 metric tons; later versions, up to 130 metric tons (the equivalent of 75 sports utility vehicles), according to a NASA press release. Bolden said:

With its superior lift capability, the SLS will expand our reach in the solar system and allow us to explore cis-lunar space, near-Earth asteroids, Mars and its moons and beyond. 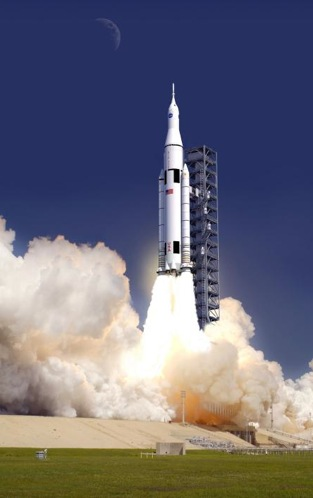 For those who are interested in the nitty-gritty of the SLS engines, WIRED’s Brian McLaughlin had a nice write-up on the subject.

Bottom line: Administrator Charles Bolden announced on September 14 that NASA is ready to move forward with the development of the Space Launch System (SLS) – an advanced heavy-lift launch vehicle that will provide a new capability for human exploration beyond Earth’s orbit.