An exoplanet seen from its moon (artist’s impression) 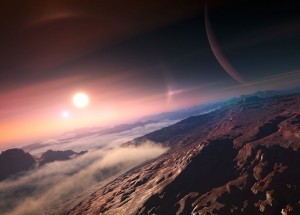 The diversity of exoplanets is large — more than 800 planets outside the Solar System have been found to date, with thousands more waiting to be confirmed. Detection methods in this field are steadily and quickly increasing — meaning that many more exoplanets will undoubtedly be discovered in the months and years to come. As an international scientific organisation, the IAU dissociates itself entirely from the commercial practice of selling names of planets, stars or or even “real estate” on other planets or moons. These practices will not be recognised by the IAU and their alternative naming schemes cannot be adopted.

Thank you! Your submission has been received!
Oops! Something went wrong while submitting the form.
END_OF_DOCUMENT_TOKEN_TO_BE_REPLACED