Here’s how NASA’s MESSENGER mission – which orbited Mercury from 2011 to 2015 – let scientists finally solve one of Mercury’s biggest mysteries, about whether its innermost core is liquid or solid.

Mercury as seen by MESSENGER in false color, to visually enhance the chemical, mineralogical and physical differences between the rocks that make up Mercury’s surface. Image via NASA/Johns Hopkins University Applied Physics Laboratory (JHUAPL)/Carnegie Institution for Science (CIS).

Mercury, the smallest planet in our solar system and closest to the sun, doesn’t resemble Earth much on the outside, but deep inside is a different story. It has been known for a long time now that Mercury has a liquid metallic outer core, as Earth does, but planetary scientists didn’t know if Mercury was also like Earth in having a solid inner core. Thanks to new analysis of data from the MESSENGER mission, it turns out that Mercury’s core is solid. It’s also about the same size as Earth’s inner core, even though Mercury itself is much smaller than Earth.

The new peer-reviewed findings were published in Geophysical Research Letters on April 15, 2019.

According to Antonio Genova at Sapienza University of Rome: 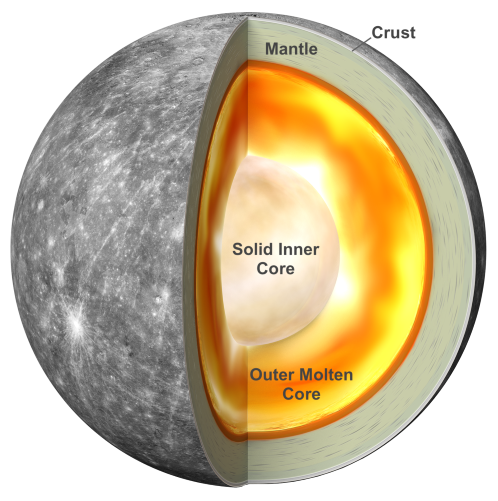 But now it seems that another question – whether Mercury’s inner core is solid or liquid – has finally been answered. So how did Genova and his team do it?

They used data from several observations of Mercury from the MESSENGER spacecraft, which orbited the planet from 2011 to 2015. The planet’s spin and gravity provided the clues needed to figure out the mystery of the planet’s inner core. The researchers searched for gravity anomalies – regions where there is an increase or decrease in mass – using radio data from MESSENGER. Similar gravity anomalies have been found on our own moon, as an example.

Mercury rotates much more slowly than Earth does – one day on Mercury is equal to about 58 Earth days – and previously observed variations were enough to determine that the planet had a molten outer core. But this was not enough to figure out the nature of the inner core. That’s where the gravitational analysis came in. By looking at how the spacecraft accelerated under the influence of Mercury’s gravity, especially during the lowest-altitude orbits, scientists could take more accurate measurements of the innermost part of the core.

Comparison of the interiors of Earth, Mars and the moon (artist’s concept). New research shows that Mercury has a solid inner core as Earth does. Image via NASA/JPL-Caltech.

It took many different kinds of data to achieve this result, as Erwan Mazarico, a planetary scientist at Goddard and co-author of the new study, explained:

We had to pull together information from many fields: geodesy, geochemistry, orbital mechanics and gravity to find out what Mercury’s internal structure must be.

Such an advanced solidification of the core demonstrates how the deepest part of Mercury is similar to that of the Earth: understanding the nature and evolution of the internal structure of other planets is essential to enhance our knowledge of Earth’s future. Every new bit of information about our solar system helps us understand the larger universe. 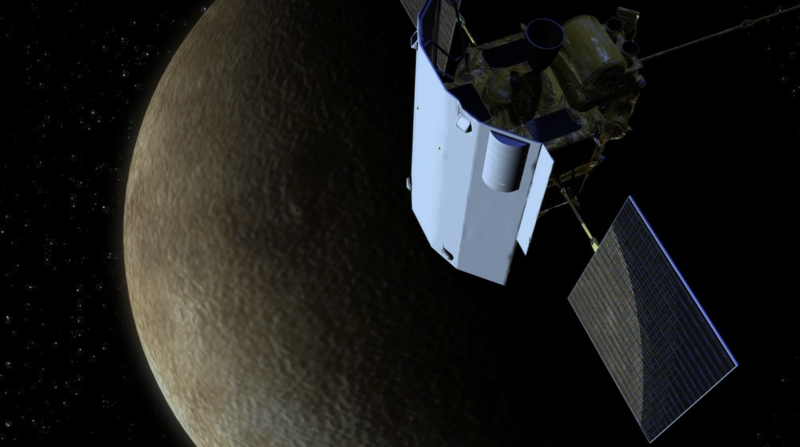 Artist’s concept of MESSENGER orbiting Mercury. Without the spacecraft’s analysis, scientists wouldn’t have been able to determine the composition of the planet’s inner core. Image via NASA/Johns Hopkins University Applied Physics Laboratory/Carnegie Institution for Science.

These new findings about Mercury are not only of great scientific interest, but also highlight how essential robotic missions are in the exploration of the solar system. The kind of data taken by MESSENGER would not have been possible from Earth – only by getting close to the planet’s surface were scientists able to find out what Mercury is like in its innermost core, and discover that it has a solid heart.

Bottom line: Learning about Mercury’s inner core will help scientists gain more knowledge about not only how Mercury formed and evolved, but about other rocky planets in our solar system as well – and even rocky exoplanets orbiting distant stars.

Source: Geodetic Evidence That Mercury Has A Solid Inner Core