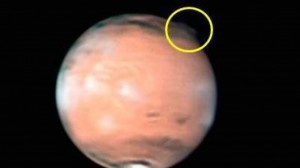 Observations of a mysterious plume-like feature (marked with yellow arrow) at the limb of the Red Planet on 20 March 2012. The observation was made by astronomer W. Jaeschke. The image is shown with the north pole towards the bottom and the south pole to the top.

Thank you! Your submission has been received!
Oops! Something went wrong while submitting the form.
END_OF_DOCUMENT_TOKEN_TO_BE_REPLACED