Most detailed view yet of Milky Way’s magnetic fields

Researchers have created a new map of the Milky Way’s magnetic fingerprint, the magnetic fields that shape our galaxy. 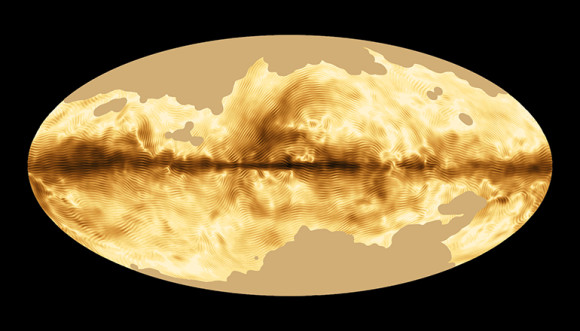 A new map of the entire sky offers a remarkably detailed picture of the magnetic fields that shape the Milky Way, including field lines that run parallel to the plane of the galaxy and great loops and whorls associated with nearby clouds of gas and dust.

Researchers created the map using data from the Planck Space Telescope, which since 2009 has charted the light from the universe shortly after the Big Bang known as the cosmic microwave background (CMB).

But Planck also observes light from much closer than the farthest reaches of time and space. With an instrument called the high frequency instrument (HFI), Planck detects light from microscopic dust particles within our galaxy. The density of the dust is incredibly low; a volume of space equal to a large sports stadium or arena would contain one grain.

Planck’s HFI identifies the non-random direction in which the light waves vibrate—known as polarization. It is this polarized light that indicates the orientation of the field lines.

For example, the magnetic field governs the coupling of the motions of gas and dust between stars, and so plays a role in star formation and the dynamics of cosmic rays.

“And now,” says Scott, “Planck has given us the most detailed picture of it yet.”

The “fingerprint” and other results are described in four papers published in the journal Astronomy & Astrophysics.

Researchers use Planck data to study the dust found throughout our galaxy, says Peter Martin, interim director of the Dunlap Institute for Astronomy and Astrophysics at University of Toronto.

“Dust is often overlooked but it contains the stuff from which terrestrial planets and life form. So by probing the dust, Planck helps us understand the complex history of the galaxy as well as the life within it.”

Also, for cosmologists studying the origin and evolution of the universe, data to be released later this year by scientists from the Planck collaboration should allow astronomers to separate with confidence any possible foreground signal from our galaxy from the tenuous, primordial, polarized signal from the CMB. In March 2014, scientists from the BICEP2 collaboration claimed the first detection of such a signal.

The Planck data will enable a much more detailed investigation of the early history of the cosmos, from the accelerated expansion when the Universe was much less than one second old to the period when the first stars were born, several hundred million years later.

“These results help us lift the veil of emissions from these tiny but pervasive galactic dust grains which obscure a Planck goal of peering into the earliest moments of the Big Bang to find evidence for gravitational waves created in that epoch, as reported by BICEP2,” says J. Richard Bond, professor at the Canadian Institute for Theoretical Astrophysics.

Researchers from McGill University and University of Alberta contributed to the study.