NASA hopes to send astronauts to the surface of the moon in 5 years, and has planned a landing site where no human has yet been: the lunar south pole. 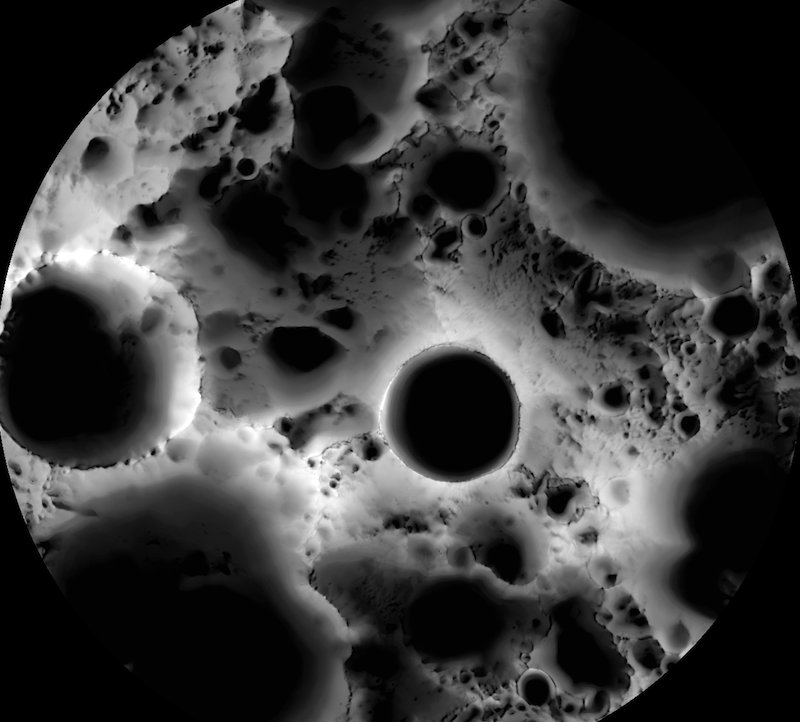 On this multi-temporal illumination map of the moon, the lunar south pole is on the rim at about 9 o’clock. It’s the site NASA’s next planned mission landing. Image via NASA/GSFC/Arizona State University.

NASA is working to send astronauts to the surface of the moon by 2024. For a lunar landing site, NASA is planning on the moon’s south pole.

One of the main reasons for that location, said NASA, is that the moon’s south pole has ice, and water is a critical resource for long-term exploration – for drinking, cooling equipment, breathing and making rocket fuel for missions to Mars and beyond.

Steven Clarke is deputy associate administrator of the Science Mission Directorate at NASA Headquarters in Washington. Clarke said in a statement:

We know the south pole region contains ice and may be rich in other resources based on our observations from orbit, but, otherwise, it’s a completely unexplored world. The south pole is far from the Apollo landing sites clustered around the equator, so it will offer us a new challenge and a new environment to explore as we build our capabilities to travel farther into space. 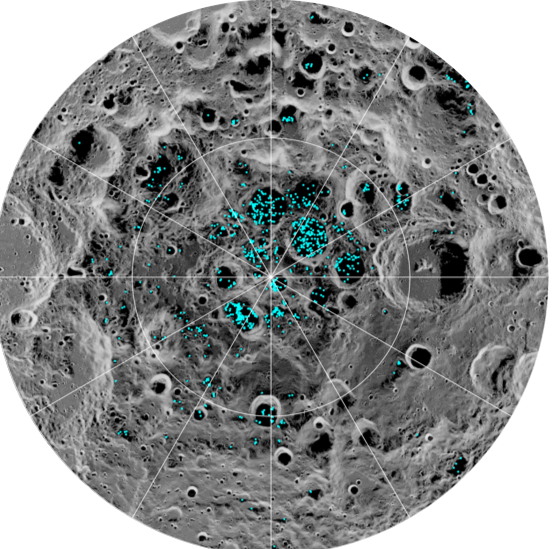 The image shows the distribution of surface ice at the moon’s south pole, detected by NASA’s Moon Mineralogy Mapper instrument. Blue represents the ice locations, plotted over an image of the lunar surface, where the gray scale corresponds to surface temperature (darker representing colder areas and lighter shades indicating warmer zones). The ice is concentrated at the darkest and coldest locations, in the shadows of craters. Image via NASA.

Another reason the lunar south pole is a good target for a future human landing is that, although no human has ever been there, robotically, it’s the most thoroughly investigated region on the moon.

That’s because the elliptical polar orbit of NASA’s Lunar Reconnaissance Orbiter (LRO) – which has been orbiting the moon since June 2009 – is closest to the moon during its pass over the south pole region. Through its thousands of orbits, the robotic spacecraft has collected more precise information – topography, temperature and locations of likely frozen water – about the south pole region than any other.

Most of the ice at the south pole is concentrated at lunar craters, which, because of the very small tilt of the moon’s rotation axis, are permanently in shadow. The crater floors feature some of the lowest temperatures in the solar system — down to -414 degrees Fahrenheit (-248 C). Water ice is stable at these temperatures and scientists believe that some of these craters harbor significant deposits of water ice.

The reason the lunar south pole crater floors are permanently shadowed is because of the low angle at which sunlight strikes the moon’s surface in the polar regions (and also because the moon has no atmosphere to help warm up its surface). This angle is based on the 1.54-degree tilt of the moon’s axis (Earth’s is 23.5 degrees). Via NASA.

The south pole’s frozen water may date back billions of years and has been untainted by the sun’s radiation or geological processes such as wind and erosion as here on Earth. John W. Keller, a lunar scientist at NASA’s Goddard Space Flight Center, said:

That record of water collection is a record that can help us understand how water and other volatiles have been moving around the solar system, so we’re very interested in getting to these locations and sampling the material there.

Other areas at the moon’s south pole — for example near Shackleton crater – are bathed in sunlight for over 200 Earth days at a time, which would be a boon to a moon mission. These areas of extended illumination happen because of the moon’s tilt (and also happen at our own polar regions on Earth). Unrelenting sunlight would allow explorers to harvest sunlight to light up a lunar base and power its equipment.

The Space Policy Directive-1, signed in December 2017, provides for a U.S.-led integrated program with private sector partners for a human return to the moon, followed by missions to Mars and beyond.

Bottom line: Reasons NASA has chosen the moon’s south pole as a landing site for the next moon mission.