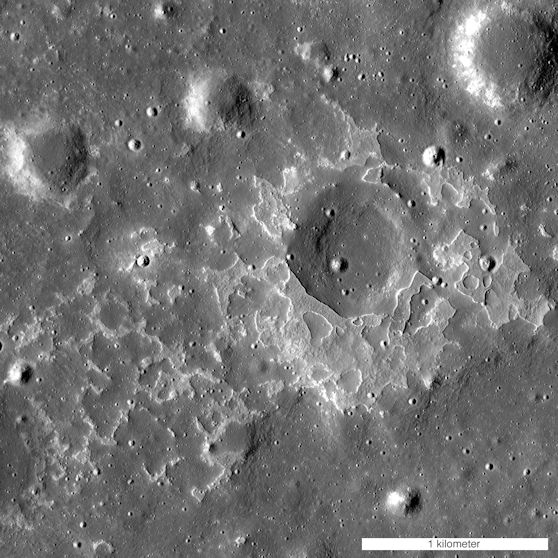 This feature on the moon is called Maskelyne. It appears to be a relatively young volcanic deposit. Image via NASA/GSFC/Arizona State University

Lunar scientists have long thought that dark outpourings of lava gave the man in the moon its characteristic face more than three billion years ago, and that the moon’s volcanic activity halted a billion years ago. Now geologists at Arizona State University’s School of Earth and Space Exploration are saying that the moon has seen small but widespread eruptions of basaltic lava during the last 50 million years, a geologically recent period. Their paper was published October 12, 2014 in the journal Nature Geoscience.

The science team identified 70 small volcanic features scattered across the moon’s dark volcanic plains, or maria. The features show as a combination of smooth, low, rounded mounds near patches of rough, blocky terrain. The scientists refer to these unusual areas as irregular mare patches.

The features are too small to be seen from Earth, averaging less than a third of a mile (500 meters) across their largest dimension. One feature named Ina has been known for a long time, having been imaged from lunar orbit by Apollo 15 astronauts in the 1970s. Several early studies indicated that Ina could be very young (10 million years or less), but only a few irregular mare patches were known then, and their significance was unclear.

It was not until the scientists had high-resolution images from cameras on NASA’s Lunar Reconnaissance Orbiter (LRO) spacecraft showing the entire moon that the full extent and significance of the small lava features were understood.

This finding is the kind of science that is literally going to make geologists rewrite the textbooks about the moon.

The ages of the irregular mare patch features come from studies of crater sizes and numbers within a given area. These crater-counting dates are linked to laboratory ages provided by Apollo and Luna samples. The results show that instead of lunar volcanism stopping abruptly about a billion years ago, it ended more gradually, continuing until less than 50 million years ago.

Activity at Ina, the scientists found, ended about 33 million years ago, and at another irregular mare patch, Sosigenes, it stopped only about 18 million years ago. (In contrast, most of the lava flows that make up the dark plains visible by eye from Earth erupted between 3.5 and 1 billion years ago.)

The researchers note that the new discovery is hard to reconcile with what’s currently thought about the temperature of the moon’s interior. 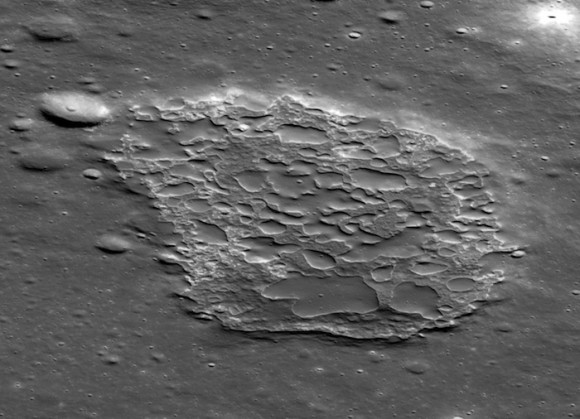 The feature called Ina is about 2 miles long by 1.2 miles wide (2 by 3 km) and 160 feet (50 meters) deep. Its floor is covered with many small, low lava mounds. The number of craters seen on the mounds indicates that the eruptions happened about 33 million years ago.
Photo credit: NASA/GSFC/Arizona State University 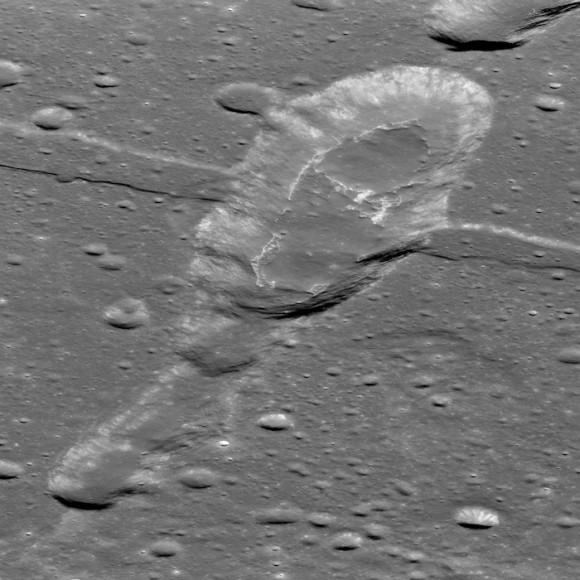 Geologically recent eruptions of basaltic lava made smooth, mounded patches on the floor of this shallow depression the team calls Sosigenes IMP (irregular mare patch). The oval feature is about 1,000 feet (300 meters) deep and measures roughly 2 miles wide by 4.5 miles long (3 by 7 kilometers). The sparse number of craters on the lava flows suggests the eruptions occurred only about 18 million years ago. Photo via NASA/GSFC/Arizona State University