Iron-60 found in moon rocks supports an earlier finding that – 2 million years ago – a supernova exploded only 300 light-years away. 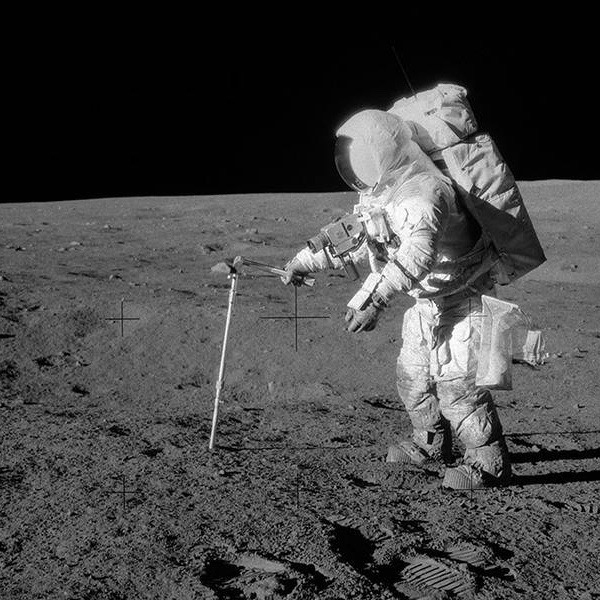 Moon rocks collected by Apollo astronauts have been found to contain iron-60, which is created only by supernovae. Here, Apollo 12-astronaut Alan Bean takes a sample of the lunar surface. Photo via NASA.

A special form of iron known as iron-60 – created only by exploding stars, or supernovae – has been found in moon rock. It provides further evidence that a relatively nearby massive star exploded about 2 million years ago, propelling its newly-created elements towards Earth and the moon. Scientists from Germany and the U.S. reported these new findings in the April 13, 2016, issue of Physical Review letters. Their analysis of the moon rocks also indicates that the supernova exploded just 300 light-years away, a number in agreement with earlier ocean sediment studies.

Almost all elements heavier than hydrogen and helium, up to iron, are created inside stars as a by-product of nuclear fusion. Elements heavier than stable iron are only forged in the tremendous pressures that occur when a very massive star explodes to become a supernova.

Iron-60, an iron atom with a nucleus containing 26 protons and 34 neutrons, is an unstable isotope of iron that’s mostly created in the explosion that creates supernovae. It has a half-life of 2.6 million years (the half-life of a radioactive element is the amount of time needed for a half quantity of the radioactive isotope to decay into something else). 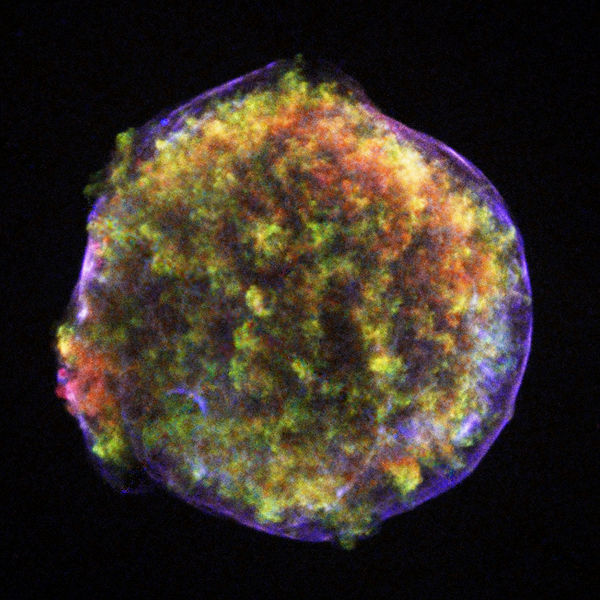 Tycho supernova in x-ray wavelengths. Elements heavier than stable iron only form when a massive star explodes to form a supernova. Image via NASA/Chandra X-ray Observatory

The hypothesis that a nearby supernova was the source of iron-60 on Earth was first proposed in 1999 when iron-60 was found in deep-sea crust. A study published in early April, 2016, found more evidence of it, when iron-60 was detected in deep sea sediment and crust obtained from the Pacific, Atlantic and Indian Oceans.

Dr. Gunther Korschinek, a physicist at the Technical University of Munich and a co-author of the research paper, remarked in a statement:

We therefore assume that the iron-60 found in both terrestrial and lunar samples has the same source: These deposits are newly created stellar matter, produced in one or more supernovae.

A small amount of iron-60, however, can also result from the transmutation of elements on the lunar surface by cosmic ray bombardment. Korschinek commented:

But this can only account for a very small portion of the iron-60 found. 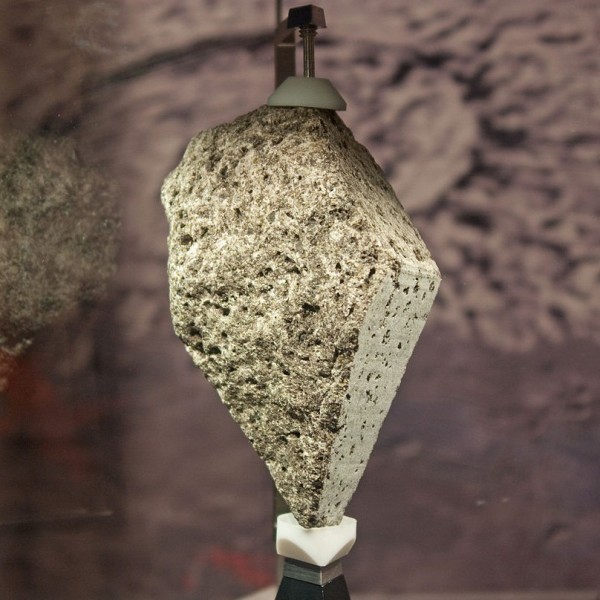 Lunar olivine basalt collected by Apollo 15 astronauts, on display in the National Museum of Natural History. Image via Wknight94 via Wikimedia Commons.

Iron-60 in the lunar rock samples were detected using an accelerator mass spectrometer, an instrument used to study radioactive atoms found among stable atoms. Results from the lunar rock analysis allowed the research team to establish an upper limit amount on the influx of iron-60 particles from the supernova. Said Korschinek:

The measured iron-60-flow corresponds to a supernova at a distance of about 300 light-years. This value is in good agreement with a recently theoretical estimation published in Nature.

Bottom line: Scientists have discovered iron-60, a form of iron only created in supernovae, in moon rocks collected by Apollo astronauts. It supports an earlier finding that – 2 million years ago – a supernova exploded only 300 light-years away.