Color variations on the moon reveal the presence of titanium and suggest how the lunar surface weathered.

The moon map combines images in visible and ultraviolet wavelengths. Specific minerals reflect or absorb certain parts of the electromagnetic spectrum, so the wavelengths detected by LROC WAC help scientists better understand the chemical composition of the lunar surface. The presence of titanium gives clues about the moon’s interior. 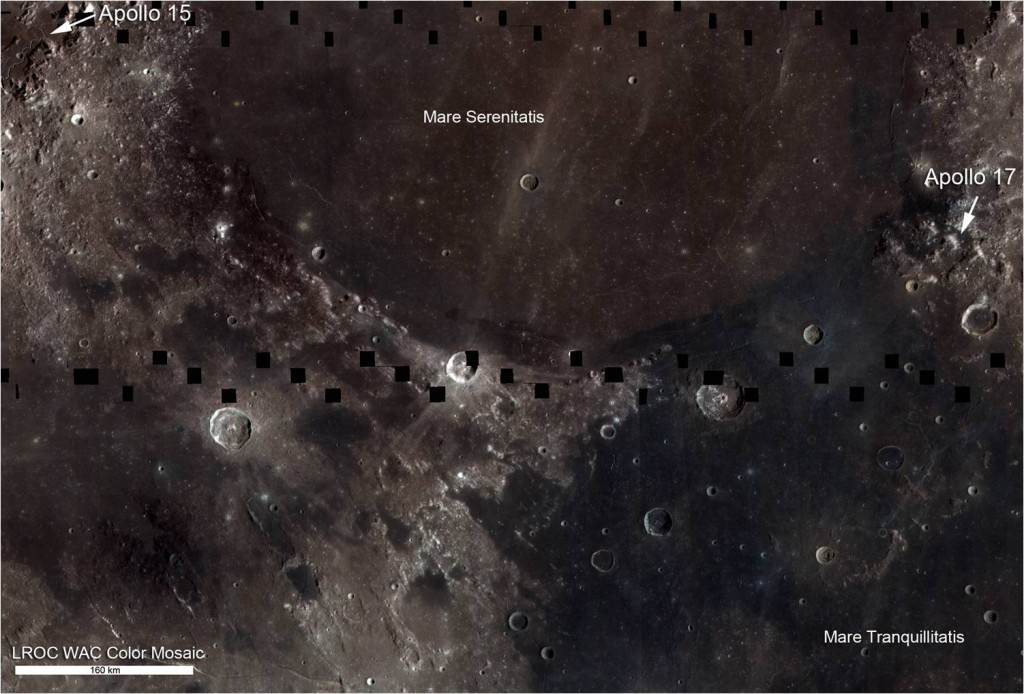 Enhanced color mosaic showing the boundary between Mare Serenitatis and Mare Tranquillitatis. The relative blue color of the Mare Tranquillitatis is due to higher abundances of the titanium-bearing mineral ilmenite. Image Credit: NASA/GSFC/Arizona State University

Mark Robinson of Arizona State University and Brett Denevi of Johns Hopkins University presented these results October 7, 2011, at the joint meeting of the European Planetary Science Congress and the American Astronomical Society’s Division for Planetary Sciences.

Looking up at the moon, its surface appears painted with shades of grey – at least to the human eye. But with the right instruments, the moon can appear colorful. The maria appear reddish in some places and blue in others. Although subtle, these color variations tell us important things about the chemistry and evolution of the lunar surface. They indicate the titanium and iron abundance, as well as the maturity of a lunar soil.

Robinson and his team previously used Hubble Space Telescope images to map titanium around a small area centered on the Apollo 17 landing site. Samples around the site spanned a broad range of titanium levels. By comparing the Apollo data from the ground with the Hubble images, the team found that the titanium levels corresponded to the ratio of ultraviolet to visible light reflected by the lunar soils.

Our challenge was to find out whether the technique would work across broad areas, or whether there was something special about the Apollo 17 area.

Robinson’s team constructed a mosaic from around 4,000 LRO WAC images collected over one month. Using the technique they had developed with the Hubble imagery, they used the WAC ratio of the brightness in the ultraviolet to visible light to deduce titanium abundance, backed up by surface samples gathered by Apollo and Luna missions.

The new map shows that in the mare, titanium abundances range from about one percent (similar to Earth) to a little more than ten percent.

We still don’t really understand why we find much higher abundances of titanium on the moon compared to similar types of rocks on Earth. What the lunar titanium-richness does tell us is that the interior of the moon had less oxygen when it was formed, knowledge that geochemists value for understanding the evolution of the moon.

Lunar titanium is found mostly in the mineral ilmenite, a compound containing iron, titanium and oxygen. Future miners living and working on the moon could break down ilmenite to liberate these elements. In addition, Apollo data shows that titanium-rich minerals are more efficient at retaining particles from the solar wind, such as helium and hydrogen. These gases would also provide a vital resource for future human inhabitants of lunar colonies.

The new maps also shed light on how space weather changes the lunar surface. Over time, the lunar surface materials are altered by the impact of charged particles from the solar wind and high-velocity micrometeorite impacts. Together these processes work to pulverize rock into a fine powder and alter the surface chemical composition and hence its color. Recently exposed rocks, such as the rays that are thrown out around impact craters, appear bluer and have higher reflectance than more mature soil. Over time this “young” material darkens and reddens, disappearing into the background after about 500 million years.

One of the exciting discoveries we’ve made is that the effects of weathering show up much more quickly in ultraviolet than in visible or infrared wavelengths. In the LROC ultraviolet mosaics, even craters that we thought were very young appear relatively mature. Only small, very recently formed craters show up as fresh regolith exposed on the surface. 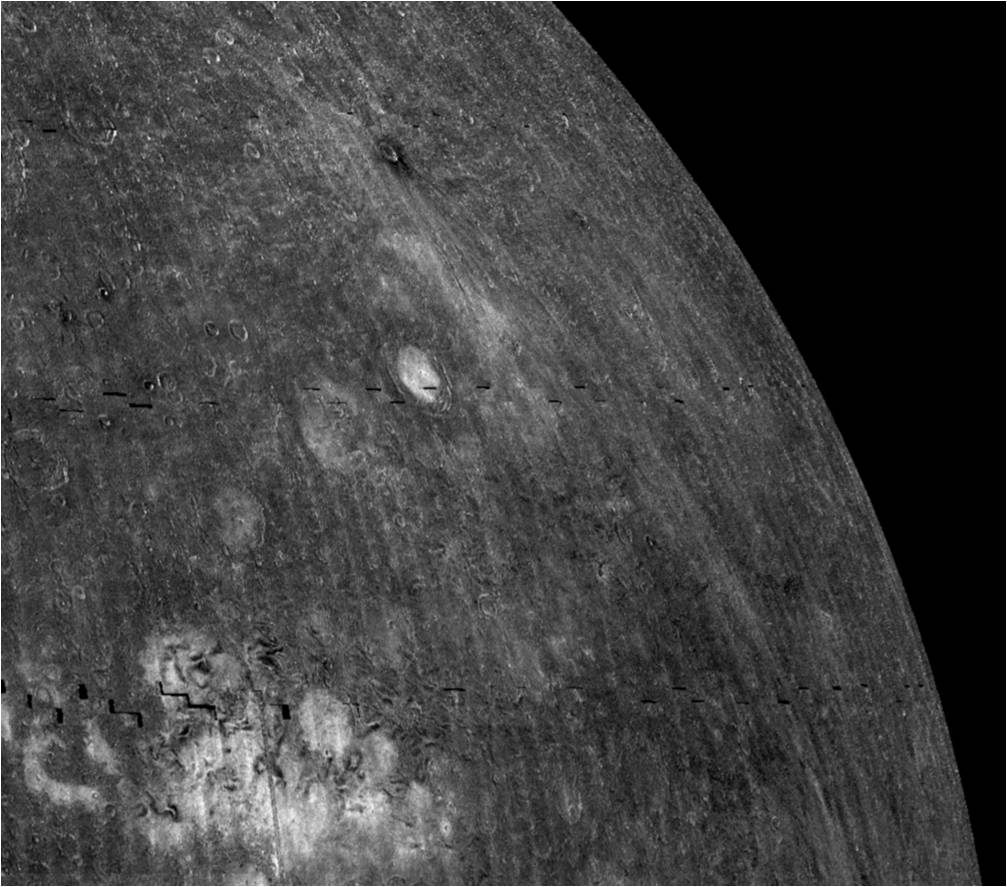 The dark haloed crater, Giordano Bruno, in the upper center is thought to be quite young and thus still has a distinct UV signature. Image Credit: NASA/GSFC/Arizona State University

The mosaics have also given important clues to why lunar swirls – sinuous features associated with magnetic fields in the lunar crust – are highly reflective. The new data suggest that when a magnetic field is present, it deflects the charged solar wind, slows the weathering process, and results in a bright swirl. The rest of the moon’s surface, which does not benefit from the protective shield of a magnetic field, is more rapidly weathered by the solar wind. This result may suggest that bombardment by charged particles may be more important than micrometeorites in weathering the moon’s surface. 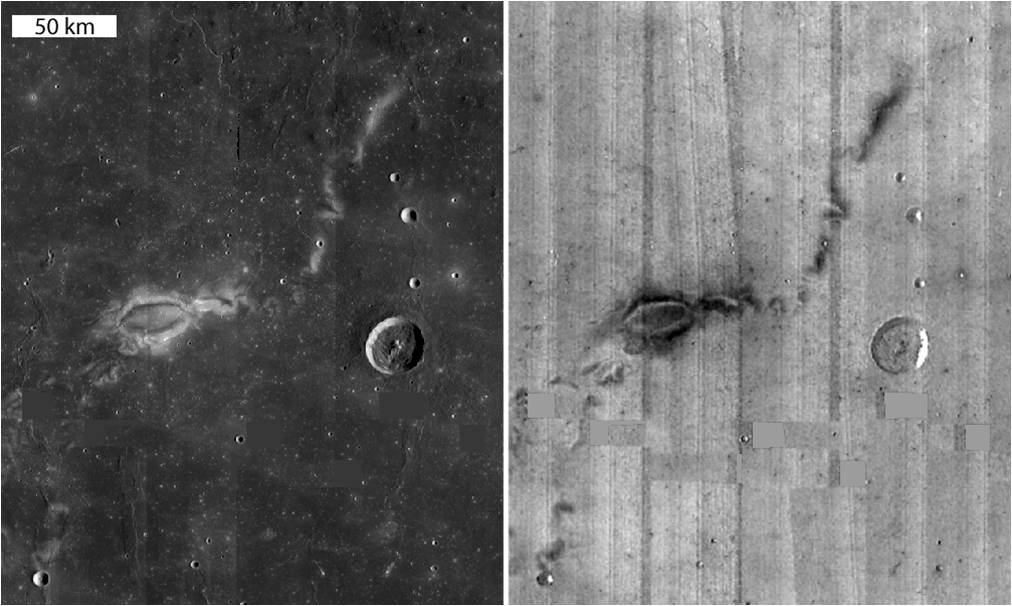