ALMA array from the air 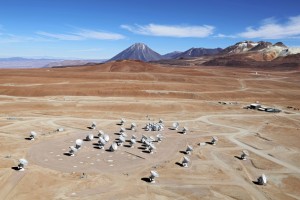 This image shows an aerial view of the Chajnantor Plateau, located at an altitude of 5000 meters in the Chilean Andes, where the array of ALMA antennas is located. The large antennas have a diameter of 12 metres, while 12 smaller antennas with a diameter of 7 metres make up the ALMA Compact Array (ACA). On the horizon, the main peaks from right to left are Cerro Chajnantor, Cerro Toco, and Juriques. This photo was taken in December 2012, four months prior to the ALMA inauguration.

Thank you! Your submission has been received!
Oops! Something went wrong while submitting the form.
END_OF_DOCUMENT_TOKEN_TO_BE_REPLACED