Researchers have discovered a distant galaxy with not one, but three supermassive black holes at its center. 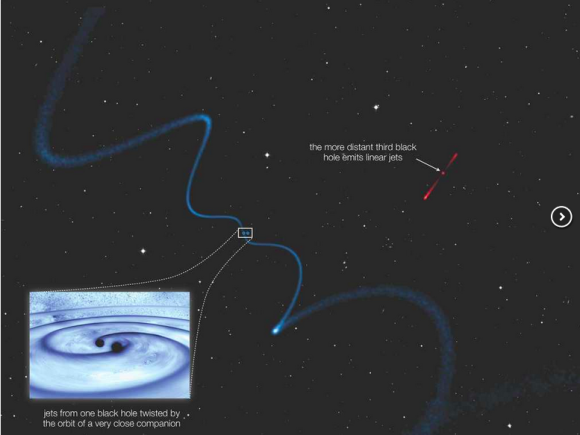 Astronomers have discovered three closely orbiting supermassive black holes in a galaxy more than 4 billion light-years away. This is the tightest trio of black holes known to date and is remarkable since most galaxies have just one at their center (usually with a mass between 1 million to 10 billion times that of the sun). The discovery suggests that these closely packed supermassive black holes are far more common than previously thought. The research has been published in the scientific journal Nature.

An international research team, led by South African Dr. Roger Deane from the University of Cape Town, used a technique called Very Long Baseline Interferometry (VLBI) to discover the inner two black holes of the triple system. This technique combines the signals from large radio antennas separated by up to 10,000 kilometers to see detail 50 times finer than that possible with the Hubble Space Telescope. Deane said:

What remains extraordinary to me is that these black holes, which are at the very extreme of Einstein’s theory of general relativity, are orbiting one another at 300 times the speed of sound on Earth. Not only that, but using the combined signals from radio telescopes on four continents we are able to observe this exotic system one-third of the way across the universe.

Such systems are important to understand for several reasons; in terms of galaxy evolution it is known that black holes influence how galaxies evolve, and understanding how often black holes themselves merge is key to this work. Furthermore, closely orbiting systems such as this are sources of gravitational waves in the universe, if general relativity is correct.

At this point, very little is actually known about black hole systems that are so close to one another that they emit detectable gravitational waves.

According to Prof. Matt Jarvis from the Universities of Oxford and the Western Cape:

This discovery not only suggests that close-pair black hole systems are much more common than previously expected, but also predicts that radio telescopes such as MeerKAT and the African VLBI Network (AVN, a network of antennas across the continent) will directly assist in the detection and understanding of the gravitational wave signal. Further in the future the SKA will allow us to find and study these systems in exquisite detail, and really allow us gain a much better understanding of how black holes shape galaxies over the history of the universe.