A black hole 12 billion times more massive than our sun – at the heart of the brightest quasar in the early universe – as the dark ages of the universe were just ending. 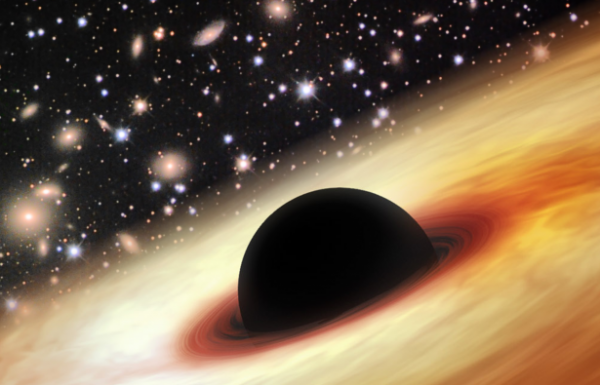 Artist’s impression of a quasar with a supermassive black hole in the distant and early universe. Image via Zhaoyu Li/NASA/JPL-Caltech/Misti Mountain Observatory.

The farther away we look in space, the deeper we are looking into the past. Astronomers looked 12.8 billion light-years from Earth – to a time only 900 million years after the Big Bang – to see what is currently the brightest quasar known in the early universe. They say it’s seven times brighter than the most distant quasar known. What’s more, it harbors a black hole with mass of 12 billion suns. So it’s the most luminous quasar, with the most massive black hole, among all the known very distant quasars. As if that weren’t enough, this quasar and its monster black hole are located at a special place and time in our universe, at what’s sometimes called the cosmic dawn. An international team led by astronomers from Peking University in China and the University of Arizona announced these findings February 26, 2015 in the journal Nature.

Astronomer Xiaohui Fan at the University of Arizona’s Steward Observatory, who co-authored the study, described the massive size of the black hole in a statement. He said:

By comparison, our own Milky Way galaxy has a black hole with a mass of only 4 million solar masses at its center; the black hole that powers this new quasar is 3,000 time heavier.

The quasar is called SDSS J0100+2802 by astronomers. The monster black hole at its heart powers this quasar’s luminosity of 420 trillion suns. The very existence of these objects puzzles astronomers. Fan said:

How can a quasar so luminous, and a black hole so massive, form so early in the history of the universe, at an era soon after the earliest stars and galaxies have just emerged?

And what is the relationship between this monster black hole and its surrounding environment, including its host galaxy?

This quasar and its super-supermassive black hole are in a place and time that astronomers call epoch of reionization – when the so-called dark ages of our universe ended. It’s literally a cosmic dawn, the point at which light from the earliest generations of galaxies and quasars filled the universe and transformed it into the sort of universe we see today. Prior to this time, the universe was opaque or “foggy,” astronomers say. There was light but not the same light we can now observe through telescopes.

This very early era in the history of our universe is not easy to study, but quasars, first discovered in 1963, are the key to understanding it. That’s because we can see quasars over great distances. Powered by the black holes in their cores, they beam vast amounts of energy across space, which astronomers use to study the early universe. Astronomers have discovered more than 200,000 quasars, with ages ranging from 0.7 billion years after the Big Bang to today. According to Xiaohui Fan, this quasar – SDSS J0100+2802 – and its monster black hole will:

… provide a unique laboratory to the study of the mass assembly and galaxy formation around the most massive black holes in the early universe.

The astronomers also say their discovery marks an important step in understanding how quasars have evolved from the earliest epoch, only 900 million years after the Big Bang, which is thought to have happened 13.7 billion years ago.

Bottom line: An international team led by astronomers from Peking University in China and the University of Arizona announced the most luminous known quasar, with the most massive known black hole, on February 26, 2015 in the journal Nature.