Astronomers are calling it a possible first detection of an intermediate-mass black hole, a missing link in black hole evolution. 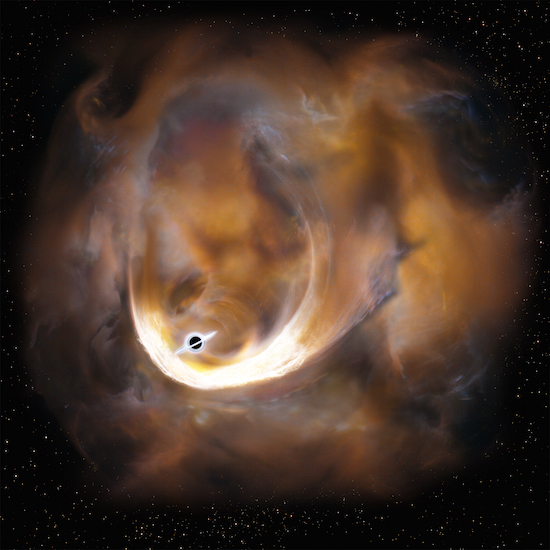 Artist’s concept of an intermediate mass black hole, with a disk around it, scattering gas clouds near the center of our Milky Way. Image via Tomoharu Oka (Keio University)

Astronomers in Japan have detected signs of the first-ever intermediate mass black hole in our Milky Way galaxy. They started with detailed observations of an enigmatic gas cloud, orbiting only 200 light-years – a hop and a skip on galactic distance scales – from the center of the Milky Way. They say the gas cloud might have been flung about by an intermediate mass black hole with a mass of 100 thousand times the mass of our sun. If so, this black hole may be a key to understanding the birth of supermassive black holes located in the centers of galaxies.

Astronomer Tomoharu Oka at Keio University in Japan led the research, which has been published in the Astrophysical Journal Letters. What makes this gas cloud – which has been labeled CO-0.40-0.22 – unusual is its surprisingly wide velocity dispersion. In the words, within this gas cloud, gas is flowing at a very wide range of speeds.

The team found this mysterious feature with two radio telescopes, the Nobeyama 45-m Telescope in Japan and the ASTE Telescope in Chile, both operated by the National Astronomical Observatory of Japan. Then they began probing the detail of its structure.

X-ray and infrared observations did not find any compact objects. That means there are no black holes inside the cloud.

The team then performed a computer simulation to find out if the observations of the gas cloud matched a possible scenario where the gas had been flung outward by a strong gravity source. They found that a hypothetical gravity source with 100 thousand times the mass of the sun – inside an area with a radius of only 0.3 light years – provided the best fit to the observed data.

… the best candidate for the compact massive object is a black hole.

If their assumption is correct, this is the first detection of an intermediate mass black hole.

Astronomers already know about two sorts of black holes. The stellar-mass black holes – whose masses range from about 5 to several tens of times the mass of our sun – are believed to form in supernova explosions. Meanwhile, supermassive black holes – thought to lie at the center of our galaxy and countless other galaxies throughout the universe – have masses ranging from several million to billions of times the mass of our sun. No one knows how they’re formed.

These astronomers say these results open a new way to search for black holes with radio telescopes. Oka said:

Investigations of gas motion with radio telescopes may provide a complementary way to search for [invisible] black holes.

The on-going wide area survey observations of the Milky Way with the Nobeyama 45-m Telescope and high-resolution observations of nearby galaxies using the Atacama Large Millimeter/submillimeter Array (ALMA) have the potential to increase the number of black hole candidates dramatically. 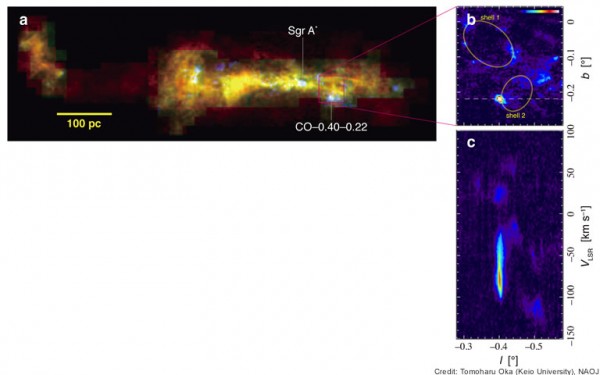 (Figure a) Milky Way’s center seen in 115 and 346 GHz emission lines of carbon monoxide. White regions show the condensation of dense, warm gas. (Figure b) Close-up intensity map around CO-0.40-0.22, a possible intermediate mass black hole. Elipses indicate shell structures in the gas near it. (Figure c) Velocity dispersion diagram taken along the dotted line shown above. The wide velocity dispersion of 100 km/s in CO-0.40-0.22 stands out. Image via NAOJ.

Bottom line: Astronomers observed a strange gas cloud orbiting only 200 light-years from the center of our Milky Way galaxy. Within the cloud, various streams of gas are moving at a wide range of speeds. The astronomers ran computer simulations to see if something might have encountered the gas cloud and flung it outward, causing the motion of the gas. The best fit for the observations was a black hole of intermediate mass – with 100 thousand times the mass of the sun – which would be invisible, but possibly nearby. If that is the case, it is the first detection of an intermediate mass black hole.

Read more from the National Astronomical Observatory of Japan