Our Milky Way as a “melting pot”

Where do stars we see at night come from? Newly confirmed streams of stars – thought to be coming to our Milky Way from other galaxies – suggest not all Milky Way stars were born here.

It’s well known in astronomy that – when we look up at night – all the stars we see belong to our Milky Way galaxy. But astronomers are coming to understand that not all Milky Way stars were born here. Instead, some stars appear to have migrated to our galaxy from other galaxies. The evidence comes from streams of stars detected in our night sky, thought to be created when small galaxies interact with our Milky Way. At last week’s meeting of the American Astronomical Society in Washington D.C., astronomers announced the discovery of 11 new stellar streams, discovered in data from the ongoing Dark Energy Survey (DES).

Prior to the discovery, only two dozen or so stellar streams were known, many of which were discovered in data from a precursor survey, the Sloan Digital Sky Survey (SDSS).

As is so often the case with dynamic events in our universe, gravity is the culprit in bringing new stars to Milky way shores. Astronomers believe that, when a small neighboring galaxy ventures close to the Milky Way, the Milky Way’s gravity draws out tendrils of stars from the neighboring galaxy, which trail behind it in a stream.

Many such interactions are thought to have contributed stars to the halo of the Milky Way.

Stellar streams are difficult to pick out, these astronomers said, because their stars are spread out over a relatively large area of sky. Alex Drlica-Wagner of Fermilab, a member of the DES team, said in a statement:

These discoveries are possible because the Dark Energy Survey is the widest, deepest, and best-calibrated survey out there.

And more discoveries are expected, because the data have been released for crowd-sourced examinations, in a way that’s becoming more and more common in astronomy. That is, data from the DES’s first three years – which is currently being carried out with the Dark Energy Camera (DECam) on the 4-m Blanco telescope at the Cerro Tololo Inter-American Observatory (CTIO) in northern Chile – have been also made publicly available in conjunction with the announcement.

The great thing about a big astronomical survey like this is that it also opens a door to many other discoveries, like the new stellar streams. With the DES data now available as a ‘digital sky’ accessible to all, our hope is that the data will lead to the crowdsourcing of new and unexpected discoveries.

Read more about this study via NOAO 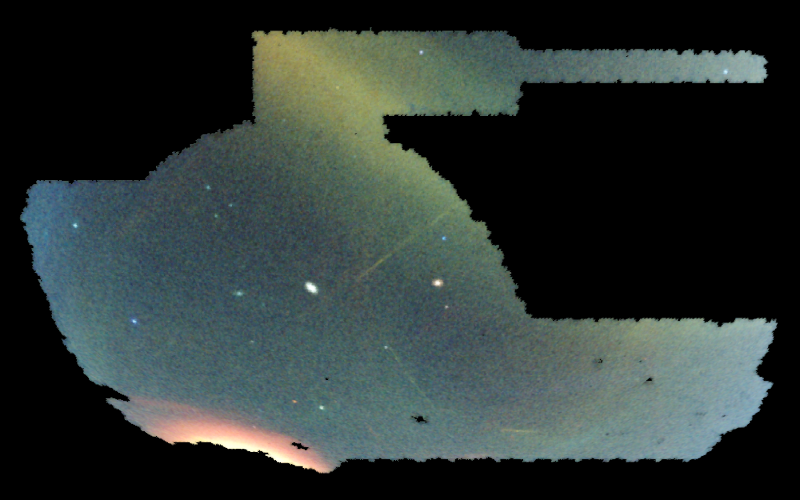 View larger. | Color image of the Dark Energy Survey field, with color indicating the distance of stars. Blue is closer, green is further away, red is even further away. Several of the streams are visible as yellow streaks. Image via Alex Drlica-Wagner (Fermilab)/ Nora Shipp (U. Chicago)/ the DES Collaboration/ NOAO.

Bottom line: Using data from the Dark Energy Survey, astronomers have confirmed 11 new streams of stars – thought to be coming to our Milky Way from other galaxies – suggesting the Milky Way as a “melting pot.”