Our Milky Way almost collided with another galaxy

Astronomers found a snail-shaped substructure of stars in our larger Milky Way galaxy. It indicates the Milky Way is still enduring the effects of a near-collision that set millions of stars moving like ripples on a pond.

How do we know our own Milky Way galaxy’s history? One way is to observe the current motions of Milky Way stars (or as current as we can get them, given the finite speed of light). A revolution in our ability to track Milky Way star motions began in late 2013, with the launch of the European Space Agency’s Gaia mission. Its job is to scan the sky repeatedly, observing each of its targeted billion stars an average of 70 times over the five-year mission. In this way, Gaia will see exactly how these stars are moving; ultimately, the scientists want to use this data to construct a 3-D map of our galaxy. In the meantime, with each new release of Gaia’s data, astronomers are uncovering new insights about our galaxy. Now Gaia data have revealed a near-collision between our Milky Way and a small galaxy hundreds of millions of years ago.

The new work is based on Gaia’s second data release. It shows that some stars in our Milky Way galaxy are moving “like ripples on a pond,” these astronomers said, due to that long-ago collision.

The timeframe for the close encounter is about 300 to 900 million years ago. That’s relatively recent history, astronomically speaking.

The culprit could be the Sagittarius dwarf galaxy, one of several dozen small galaxies known to accompany our larger galaxy in space. The Milky Way is in the process of cannibalizing this little galaxy, which contains only a few tens of millions of stars, in contrast to our galaxy’s 100 billion stars.

At the beginning the features were very weird to us. I was a bit shocked and I thought there could be a problem with the data because the shapes are so clear. 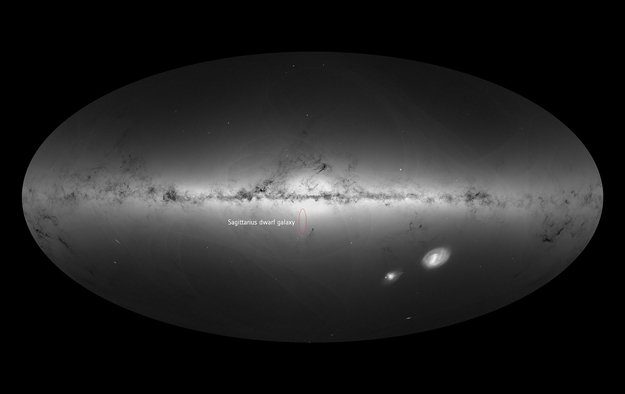 In this all-sky map of the density of stars in our Milky Way galaxy – observed by the Gaia mission between July 2014 and May 2016 – the Sagittarius dwarf galaxy, a small satellite of the Milky Way, is leaving a stream of stars behind as an effect of our larger galaxy’s gravitational tug. This star stream from the Sagittarius dwarf is visible as an elongated feature below our galaxy’s center (pointing in the downwards direction). Image via Gaia mission/ESA.

A statement from the Gaia mission explained:

The pattern was revealed because Gaia not only accurately measures the positions of more than a billion stars but also precisely measures their velocities on the plane of the sky. For a subset of a few million stars, Gaia provided an estimate of the full three-dimensional velocities, allowing a study of stellar motion using the combination of position and velocity, which is known as ‘phase space.’

In phase space, the stellar motions revealed an interesting and totally unexpected pattern when the star’s positions were plotted against their velocities. [Antoja] couldn’t quite believe her eyes when she first saw it on her computer screen.

One shape in particular caught her attention. It was a snail shell-like pattern in the graph that plotted the stars’ altitude above or below the plane of the galaxy against their velocity in the same direction.

It had never been seen before.

But, these astronomers said, the Gaia data had undergone multiple validation tests. They said the only conclusion they could draw was that these features do exist in the vast space of our Milky Way. And they believe the structures they see come from a near-collision. Antoja explained:

It is a bit like throwing a stone in a pond, which displaces the water as ripples and waves.

Unlike the water molecules, which settle again, the stars retain a “memory” that they were perturbed, these astronomers said:

This memory is found in their motions. After some time, although the ripples may no longer be easily visible in the distribution of stars, they are still there when you look in their velocities.

Why didn’t astronomers see them before? The technology had not advanced far enough to enable that to happen. Antoja said:

It looks like suddenly you have put the right glasses on and you see all the things that were not possible to see before. 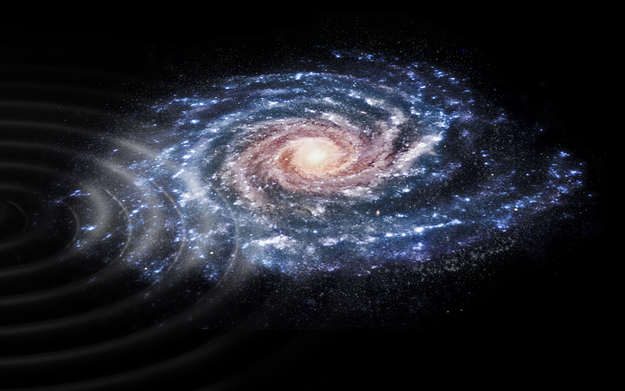 Artist’s concept of perturbations in star velocities – like ripples in a pond – newly discovered in our Milky Way galaxy by the Gaia mission. These ripples suggest a smaller galaxy nearly collided with our Milky Way, 300 to 900 million years ago. Image via ESA.

Bottom line: A snail-shaped substructure of stars in our larger Milky Way galaxy indicates the Milky Way is still enduring the effects of a near-collision that set millions of stars moving, like ripples on a pond.