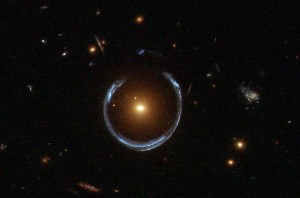 The blue ring in this image is a gravitational lens mirage. The gravity of a luminous red galaxy has gravitationally distorted the light from a much more distant blue galaxy. Since such a lensing effect was generally predicted in some detail by Albert Einstein over 70 years ago, rings like this are now known as Einstein Rings. The sort of effect lets astronomers identify distant objects – either hugely massive ones like galaxies, or small mass objects like planets – which could not otherwise be seen. Image Credit: Wikimedia Commons

Thank you! Your submission has been received!
Oops! Something went wrong while submitting the form.
END_OF_DOCUMENT_TOKEN_TO_BE_REPLACED