The chemical fingerprint of exoplanet HD 209458b’s atmosphere reveals as many as 6 molecules and that it has migrated inwards from its birthplace much farther out in its star system. 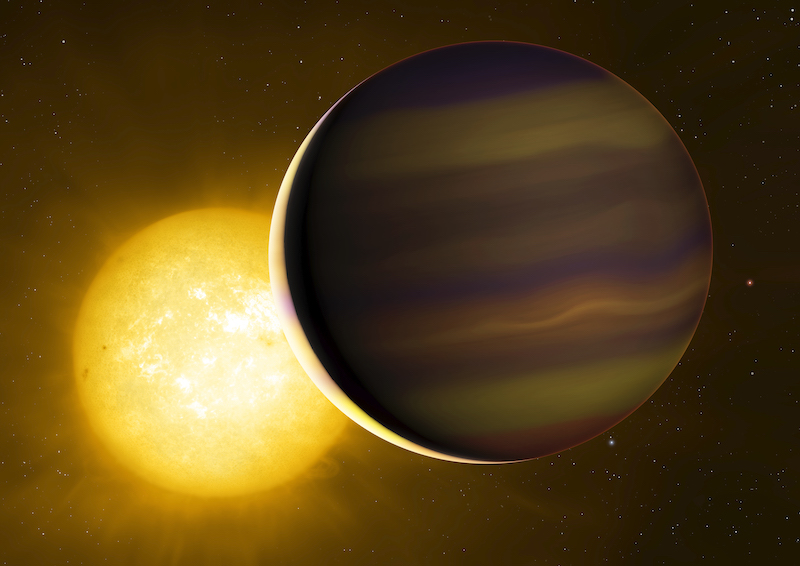 Artist’s concept of exoplanet Osiris – aka HD 209458b – as it transits in front of its star. Note the illuminated crescent of the planet, where the colors illustrate the light spectra that – like a chemical fingerprint – let astronomers identify as many as 6 molecules in the planet’s atmosphere. “It’s the first time so many molecules have been measured and points to an atmosphere with more carbon than oxygen”, they said. Image via University of Warwick/ Mark Garlick.

An international team of astronomers analyzed the light of an exoplanet labeled HD 209458b – also known as Osiris – and found as many as six molecules in its atmosphere. It’s the most molecules ever detected in a planetary atmosphere outside of our solar system, according to an announcement from University of Warwick in the U.K. on April 7, 2021. The atmosphere is much richer in carbon than expected, revealing that the planet didn’t always orbit as close to its star as we see it now. Instead, these astronomers believe, the giant gas planet was formed much farther out in its star system and has migrated inwards to its current close location.

Osiris now orbits very closely around its host star HD 209458. It’s only about 4.3 million miles (7 million km) from its star, well within the orbit of Mercury around our local star, the sun. This zippy revolution around its star results in a year for this exoplanet that is only 3.5 Earth days long! But Osiris isn’t a small rocky planet like Venus, Earth or Mars. It’s about 2.5 times larger than Jupiter, our solar system’s largest planet (but not quite as heavy, weighing in at 69% of Jupiter’s mass).

The new research was published April 7 in the peer-reviewed journal Nature.

Astronomer Paolo Giacobbe at the Italian National Institute for Astrophysics is lead author on the paper. He said of these detections:

If this discovery were a novel it would begin with ‘In the beginning, there was only water…’ That’s because the vast majority of the inference on exoplanet atmospheres from near-infrared observations was based on the presence (or absence) of water vapor, which dominates this region of the spectrum. We asked ourselves: is it really possible that all the other species expected from theory do not leave any measurable trace?

Discovering that it is possible to detect them, thanks to our efforts in improving analysis techniques, opens new horizons to be explored. 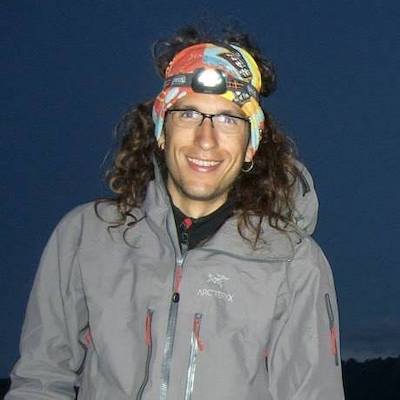 Paolo Giacobbe is the lead author on a new study that found 6 molecules in the atmosphere of the exoplanet Osiris. The discovery revealed Osiris must have formed much farther out in its star system than we see it today. Image via Paolo Giacobbe/ Facebook.

This “chemical fingerprint” revealed that the composition of molecules makes the discovery extra interesting: the astronomers found double the amount of carbon to what was expected. This is about as many carbon atoms as there are oxygen atoms in the planet’s atmosphere (due to the carbon-based molecules hydrogen cyanide, methane, acetylene and carbon monoxide). But at a distance only a 20th of the distance between our Earth and the sun, this planet lies much too close to its star for having so much carbon in its atmosphere. The only way it could have collected this much carbon – according to planetary formation theory – is if it was formed much further out in its star system, at a distance comparable to that of the solar system gas giants Jupiter or Saturn.

Team member Siddharth Gandhi of the University of Warwick said:

There is no way that a planet would form with an atmosphere so rich in carbon if it is within the condensation line of water vapour. At the very hot temperature of this planet (1,500K, 2,200°F or 1,200°C), if the atmosphere contains all the elements in the same proportion as in the parent star, oxygen should be twice more abundant than carbon and mostly bonded with hydrogen to form water or to carbon to form carbon monoxide. Our very different finding agrees with the current understanding that hot Jupiters like HD 209458b formed far away from their current location.

This kind of research is important in the search for life-hosting planets. Team member Matteo Brogi, also from the University of Warwick, noted:

By scaling up these observations, we’ll be able to tell what classes of planet we have out there in terms of their formation location and early evolution. It’s really important that we don’t work under the assumptions that there is only a couple of molecular species that are important to determine the spectra of these planets, as has frequently been done before. Detecting as many molecules as possible is useful when we move on to testing this technique on planets with conditions that are amenable for hosting life, because we will need to have a full portfolio of chemical species we can detect.

How did the astronomers figure out the composition of the atmosphere to such a great detail? They looked at how the light from the host star was altered as it passed through the planet’s atmosphere, by studying its spectrum. They did this on four separate occasions using a telescope (Telescopio Nazionale Galileo) on the island of La Palma in the Canary Islands, Spain. This same technique could be used on the atmospheres of smaller, potentially life-hosting, exoplanets using new and more powerful telescopes coming online soon.

The star system in which this planet lies is located in the direction to our constellation Pegasus the Flying Horse. The system is about 159 light-years from our solar system.

Bottom line: Exoplanet HD 209458b – aka Osiris – was the first transiting exoplanet to be found. Now astronomers have measured six molecules in its atmosphere, indicating it formed much farther out in its star system than we see it today. It’s believed Osiris has since migrated inwards, to an orbit extremely near its star.