Mid-level solar flare erupts from sun on May 8

The May 8 solar flare is classified as an M5.2-class flare. M-flares are about one-tenth as strong as the most intense flares, called X-flares. 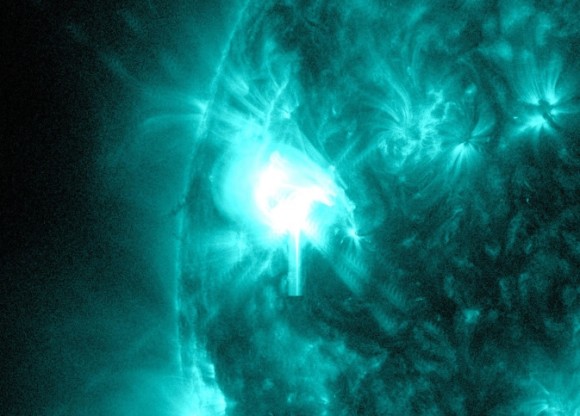 The bright light on the left side of the sun shows an M5.2-class solar flare on May 8, 2014. Image via NASA/SDO

NASA reports that the sun emitted a mid-level solar flare on Thursday (May 8, 2014), peaking at 10:07 UTC (6:07 a.m. EDT). NASA’s Solar Dynamics Observatory, or SDO, captured the image above. This flare is classified as an M5.2-class flare. M-flares are about one-tenth as strong as the most intense flares, called X-flares.

Solar flares are powerful bursts of radiation. Harmful radiation from a flare cannot pass through Earth’s atmosphere to physically affect humans on the ground. However, particularly strong solar flares that occur at such a time when their effects are aimed in our direction can disturb Earth’s atmosphere. These effects from solar storms affect the layer of our atmosphere where GPS and communications signals travel.