Pluto’s snowcapped mountains are unlike any on Earth

A new study shows how methane snow accumulates on Pluto’s mountain peaks. These snowcaps – first seen by New Horizons in 2015 – look a lot like ones on Earth, but form in a very alien environment. 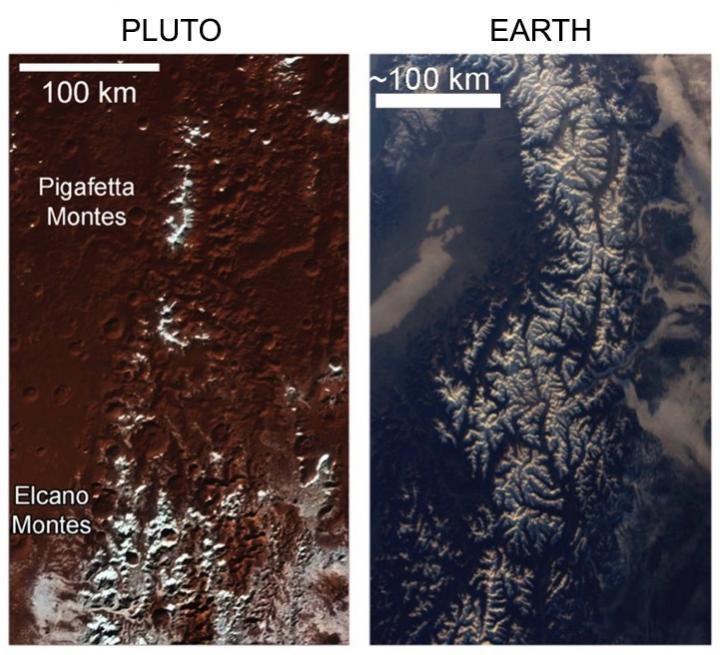 With their tall peaks reaching into the sky and and their snow glistening in the sun, snowcapped mountains on Earth are beautiful. Other planets, like Mars and Venus and even some moons, also have mountains, but they lack the scenic snow cover of earthly mountains. One notable exception, though, was discovered in 2015 by the New Horizons spacecraft, when it made its sweep through the outer reaches of our solar system. I’m talking about the snowcapped mountains of Pluto!

Not only does Pluto have mountains, which was a bit surprising given its small size, but Pluto’s mountains also have snow on their peaks. There is one significant difference, though, between the mountains of Earth and Pluto. The “snow” or frost on Pluto consists of frozen methane (CH4) instead of water ice crystals.

Meanwhile, Pluto’s mountains themselves are composed of rock-hard water ice.

The new research, by an international team of scientists led by researchers from Centre National de la Recherche Scientifique (CNRS) in France, was announced on October 13, 2020.

The associated peer-reviewed paper was published in Nature Communications on the same day. 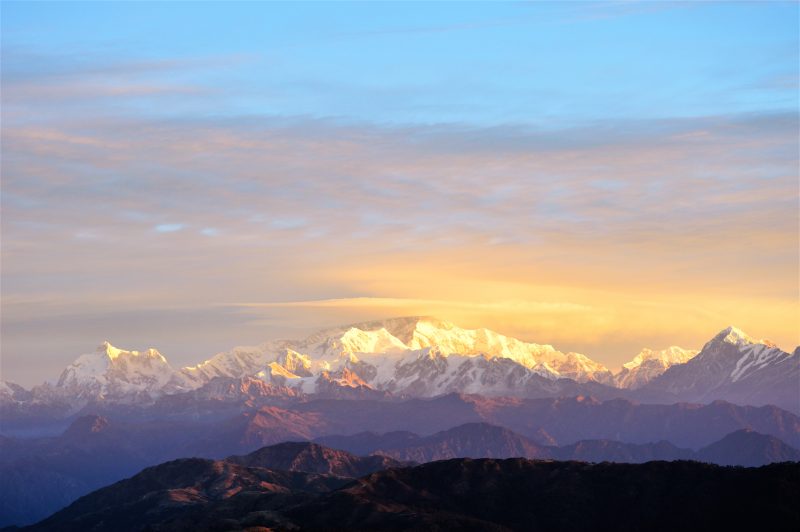 Snowcapped mountains on Earth. Sudip Aich captured this image of the Himalayas at sunrise, at Sandakphu, the highest point of the Darjeeling district on the West Bengal-Nepal border. The peak on which he was standing is 11,900 feet (3,627 meters) high. From this spot, you can see 4 of the 5 highest peaks in the world, Everest, Kangchenjunga, Lhotse and Makalu. 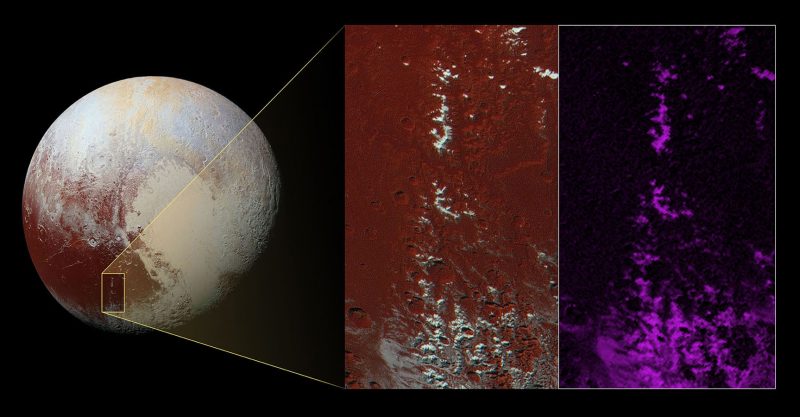 View larger. | Enhanced color view of the methane snowcapped Pigafetta Montes mountain range in Cthulhu Macula on Pluto, as seen by New Horizons on July 14, 2015. The new study helps explain how snow comes to be on Pluto’s mountains, in a process that is opposite to the way in which snow comes to be on mountain peaks on Earth. The resolution of this image is about 2,230 feet (680 meters) per pixel. The image measures approximately 280 miles (450 km) long by 140 miles (225 km) wide. Image via NASA/ Johns Hopkins University Applied Physics Laboratory/ Southwest Research Institute/ Jet Propulsion Laboratory.

The snow on Pluto’s mountains – particularly in Cthulhu Macula (formerly called Cthulhu Regio) – is part of a cycle, reminiscent of Earth’s water cycle, but integrating traces of methane in Pluto’s thin atmosphere instead of water vapor. The researchers used a climate model to find out just how the methane snow could be produced in Pluto’s un-Earthlike conditions. They found that Pluto’s mountain peaks are the only places high enough in altitude on the little world so that methane could condense out from the atmosphere. From the paper:

Here we demonstrate that the bright frosts observed in Cthulhu are mostly made of CH4-rich ice. We then use a numerical climate model of Pluto to investigate the origin of their formation. Our simulations reproduce the accumulation of high-altitude CH4 ice where the frostcapped mountains are observed, in particular on the ridges and crests of the Pigafetta and Elcano Montes in eastern Cthulhu. They show that CH4 condensation is favored by sublimation-induced circulation cells that seasonally enrich the atmosphere with gaseous methane at those higher altitudes.

Overall, the formation of CH4 frost on top of Pluto’s mountains appears to be driven by a process completely different from the one forming snowcapped mountains on the Earth, according to our model. It is remarkable that two phenomena and two materials that are so dissimilar could produce the same landscape, when seen at similar resolution. 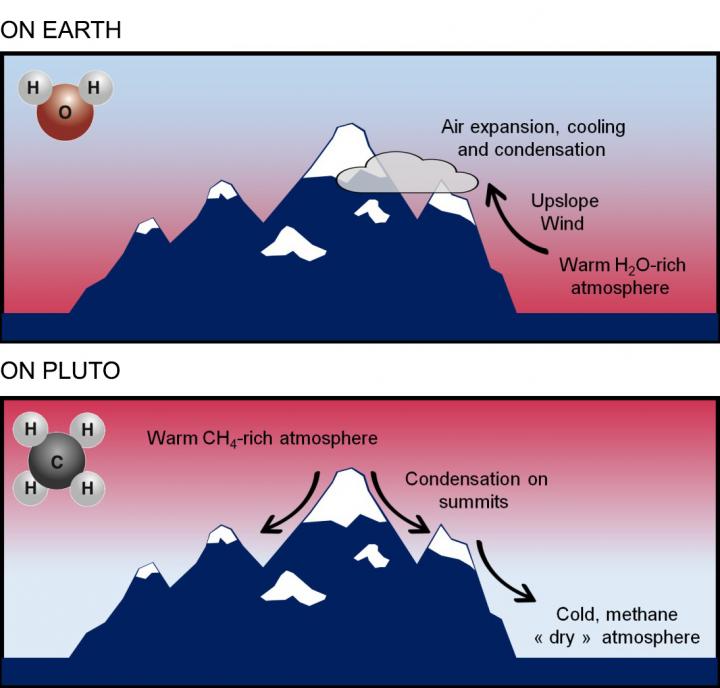 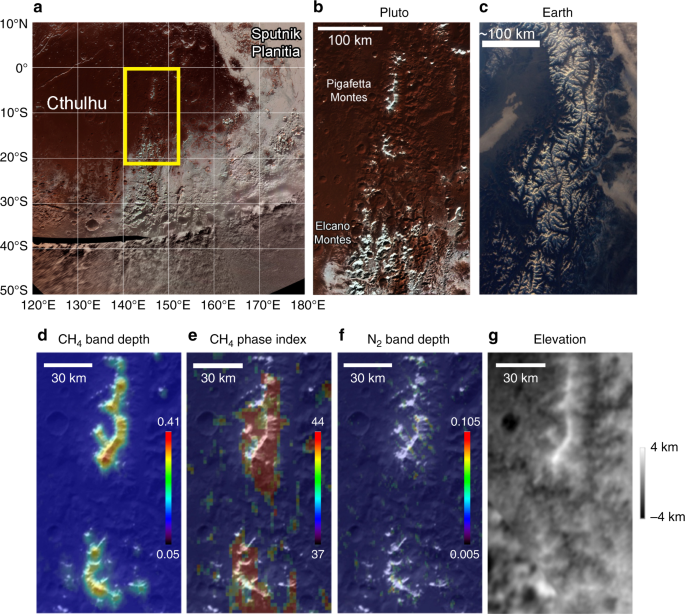 The findings also help solve another mystery as to why glaciers on Pluto, also composed of methane, have craggy ridges on them, while Earth’s glaciers, composed of water ice, tend to have smoother surfaces. As described in the paper:

Pluto is covered by numerous deposits of methane, either diluted in nitrogen or as methane-rich ice. Within the dark equatorial region of Cthulhu, bright frost containing methane is observed coating crater rims and walls as well as mountain tops, providing spectacular resemblance to terrestrial snowcapped mountain chains. However, the origin of these deposits remained enigmatic. Here we report that they are composed of methane-rich ice. We use high-resolution numerical simulations of Pluto’s climate to show that the processes forming them are likely to be completely different to those forming high-altitude snowpack on Earth. The methane deposits may not result from adiabatic cooling in upwardly moving air like on our planet, but from a circulation-induced enrichment of gaseous methane a few kilometers above Pluto’s plains that favors methane condensation at mountain summits. This process could have shaped other methane reservoirs on Pluto and help explain the appearance of the bladed terrain of Tartarus Dorsa.

Pluto is covered by exotic-composition ices and its landscape strongly resembles the polar caps on Earth (Greenland and Antarctica). New Horizons even discovered spectacular mountains on Pluto covered by bright deposits, strikingly resembling snowcapped mountain chains seen on Earth. Such a landscape had never been observed elsewhere in the solar system. Could Pluto’s atmosphere behave like Earth’s? We discovered that a new and unique (in the solar system) atmospheric process forms these snowy mountains on Pluto. 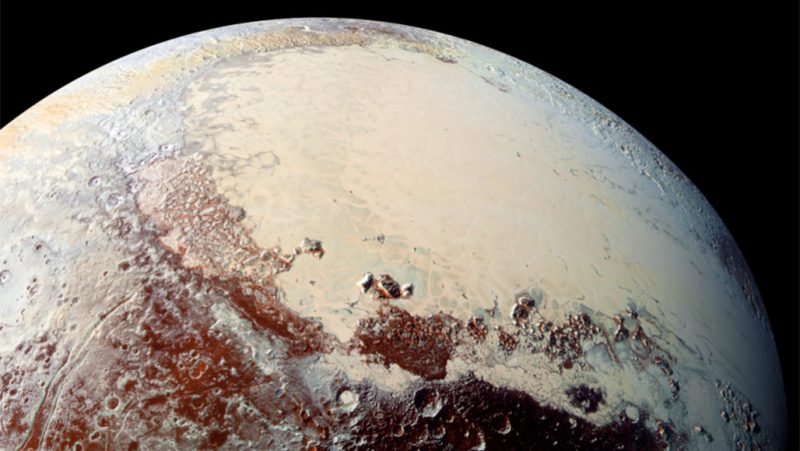 On Earth, temperatures in the atmosphere decrease with altitude. The opposite occurs on Pluto, however. Its thin atmosphere is warmed by the sun, and temperatures increase the higher up you go, which allows the methane to condense onto the mountain peaks. As Bertrand explained:

At its contact the air is cooled and flows downslope. Pluto’s atmosphere has more gaseous methane at its warmer, higher altitudes, allowing for that gas to saturate and freeze directly on the mountain peaks tall enough to reach the enriched zone. At lower altitudes, the concentration of gaseous methane is lower, and it cannot condense.

This discovery teaches us that there are still plenty of physical and dynamical processes out there in space that we do not know about, and that climates can be very different than that of Earth (despite forming a similar landscape). It is important to study Pluto and other planetary bodies because they are natural laboratories to explore and investigate the diversity of possible climates (and geology, and other planetary sciences) which gives us more perspective on our own climate. 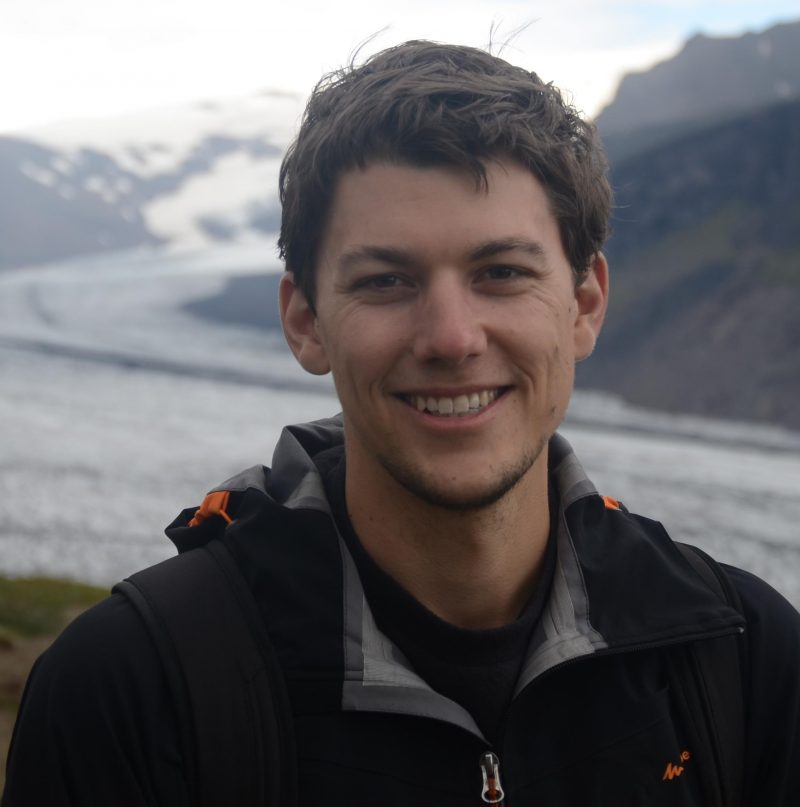 The discovery of a snowcap cycle on Pluto is a fascinating example of how active this cold, distant dwarf planet actually is. Pluto also has vast, smooth glaciers of nitrogen ice such as in Sputnik Planum, dunes of methane ice and odd “bladed terrain” with blades of ice as tall as skyscrapers. There may also be cryovolcanoes – ice volcanoes – and a subsurface ocean of water. This little world is surprisingly geologically active despite being so small and so far from the sun. It even has five moons!

Even though its visit to Pluto was just a brief flyby, New Horizons has already transformed our knowledge about this little world, and its findings will keep scientists busy for decades to come.

Bottom line: Pluto has snow on its mountain peaks just like Earth does, but these snowcaps are made of frozen methane, not water ice. A new study shows how they form in such an un-earthlike environment.

Source: Equatorial mountains on Pluto are covered by methane frosts resulting from a unique atmospheric process