MESSENGER has been getting closer to Mercury since March. It’s now closer to the planet than any spacecraft has been before. 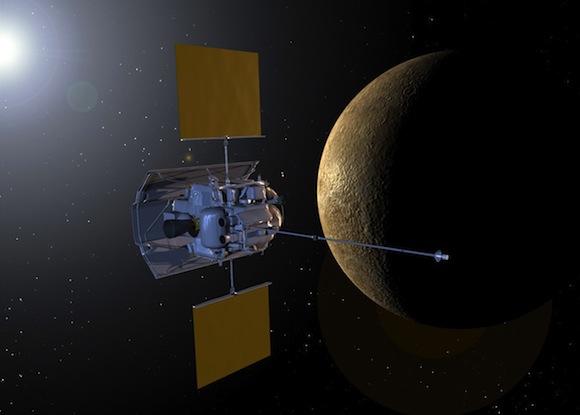 This artist’s impression shows NASA’s MESSENGER spacecraft from the instrument side. The instruments on the Mercury orbiter are shielded by a ceramic cloth sunshade. Image via Johns Hopkins University Applied Physics Laboratory

On April 20, 2014, the MESSENGER spacecraft completed its 3,000th orbit of the planet Mercury. The craft is now closer to Mercury than any spacecraft has been before; it is orbiting at an altitude of 199 kilometers (123.7 miles) above Mercury’s searing surface.

“We are cutting through Mercury’s magnetic field in a different geometry, and that has shed new light on the energetic electron population,” said MESSENGER Project Scientist Ralph McNutt of the Johns Hopkins University Applied Physics Laboratory (APL) in Laurel, Maryland. “In addition, we are now spending more time closer to the planet in general — and that has, in turn, increased the opportunities for all of the remote sensing instruments to make higher-resolution observations of the planet.”

MESSENGER has been completing three orbits of Mercury every day since April 2012, when two orbit-correction maneuvers reduced its orbital period about Mercury from 12 hours to 8 hours. The shorter orbit has allowed the science team to explore new questions about Mercury’s composition, geological evolution, and environment that were raised by discoveries made during the first year of orbital operations.

APL’s Carolyn Ernst, the deputy instrument scientist for the Mercury Laser Altimeter (MLA), said the change from a 12- to an 8-hour orbit provided her team with 50% more altimetry tracks. “MLA coverage takes a long time to build up, and because of the small footprint of the laser, a lot of coverage is needed to obtain good spatial resolution. The more data we acquire, the better we resolve the topography of the planet,” she said. “The 8-hour orbit has also allowed us to make more MLA reflectivity measurements, which have provided critical clues for characterizing Mercury’s radar-bright deposits at high northern latitudes.”

The probe has been edging closer and closer to Mercury since March 2013, at about the time that the spacecraft orbit’s minimum altitude passed closest to Mercury’s north pole.

APL’s David Lawrence, a MESSENGER Participating Scientist, said he is excited about what the low-altitude orbits will reveal about Mercury’s surface composition. “To date our compositional measurements with neutron, X-ray, and gamma-ray data have resolved only very large regions on Mercury’s surface. Altitudes of less than 100 kilometers will enable us to pinpoint the compositional signatures of specific geologic features, which in turn will help us to understand how the surface formed and has changed over time.”

MESSENGER’s periapsis altitude will continue to decrease until the first orbit-correction maneuver of the low-altitude campaign, scheduled for June 17.

“The final year of MESSENGER’s orbital operations will be an entirely new mission,” added MESSENGER Principal Investigator Sean Solomon, of Columbia University’s Lamont-Doherty Earth Observatory. “With each orbit, our images, our surface compositional measurements, and our observations of the planet’s magnetic and gravity fields will be higher in resolution than ever before. We will be able to characterize Mercury’s near-surface particle environment for the first time. Mercury has stubbornly held on to many of its secrets, but many will at last be revealed.”