Posted by Eleanor Imster and Deborah Byrd in Space | November 18, 2018

It hasn’t been easy for astronomers to peer into the cores of merging galaxies. Dust obscures the view. Now, new research has given astronomers a better look.

This simulation shows a merger between 2 galaxies. In the merger’s late stages, the nuclei, or central portions, of the galaxies become very luminous due to emission from gas falling rapidly onto their central supermassive black holes. Read more about this video here.

Both NASA and the University of Florida reported this month on new research by a team of researchers that has just completed the largest-yet survey of the cores of nearby galaxies in near-infrared light. The team used more than 20 years of high-resolution images from the vast archive of the Hubble Space Telescope, and they used images from the W. M. Keck Observatory in Hawaii. Looking in the infrared let them peer through the gas and dust surrounding the galaxies’ cores. They were specifically looking for merging galaxies, places where close pairs of supermassive black holes were coalescing into mega black holes. And they weren’t disappointed. Michael Koss of Eureka Scientific Inc. in Kirkland, Washington, who led the team, commented in a statement:

Seeing the pairs of merging galaxy nuclei [or cores] associated with these huge black holes, so close together, was pretty amazing.

The survey galaxies’ average distance was 330 million light-years from Earth. But the survey results offer a glimpse of what will likely happen closer to home, some 4.5 billion years from now, when our Milky Way galaxy combines with the neighboring Andromeda Galaxy. At that time, as these scientists said: 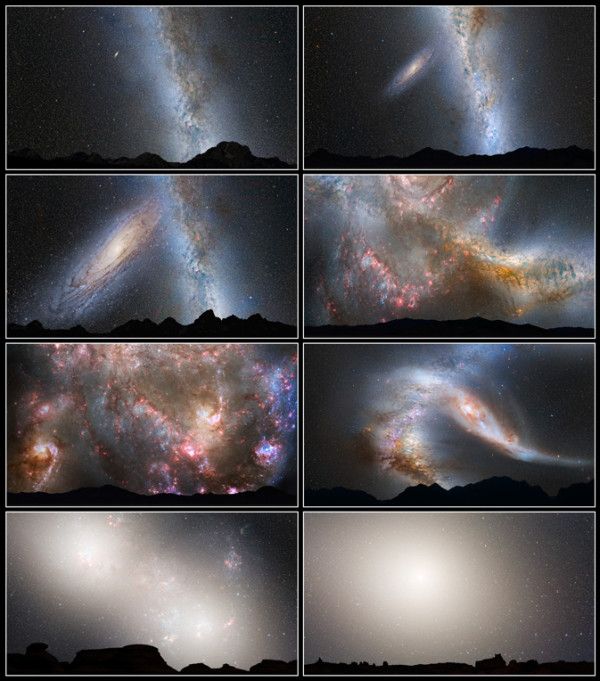 This series of illustrations shows the predicted merger – billions of years from now – between our Milky Way galaxy and the neighboring Andromeda Galaxy. Read more about these images, which are via NASA/ESA/Z. Levay and R. van der Marel, STScI/T. Hallas, and A. Mellinger.

Study team member Laura Blecha of the University of Florida, in Gainesville, said:

Computer simulations of galaxy smashups show us that black holes grow fastest during the final stages of mergers, near the time when the black holes interact, and that’s what we have found in our survey.

The fact that black holes grow faster and faster as mergers progress tells us galaxy encounters are really important for our understanding of how these objects got to be so monstrously big.

How big are they? The supermassive black hole at the center of our Milky Way, for example, is thought to be about 4 million times the mass of our sun. The Andromeda Galaxy is bigger than the Milky Way (it’s the biggest galaxy in our Local Group), and its central black hole is bigger, too. Estimates typically run up over 100 million solar masses. Beyond our Local Group, the supermassive black holes inside distant galaxies may be even more massive.

These images reveal the final stage of a union between a pair of galactic nuclei in the messy cores of colliding galaxies. The image at left, taken by Hubble’s Wide Field Camera 3, shows the merging galaxy NGC 6240. A close-up of the 2 brilliant cores of this galactic union is shown at right. This view, taken in infrared light, pierces the dense cloud of dust and gas encasing the two colliding galaxies and uncovers the active cores. The hefty black holes in these cores are growing quickly as they feast on gas kicked up by the galaxy merger. The black holes’ speedy growth occurs during the last 10 million to 20 million years of the merger. Image via NASA/ ESA/ M. Koss (Eureka Scientific Inc).

Galaxy mergers appears to be common events in our universe, and they were even more common in the early universe than they are now. They don’t happen quickly. These astronomers said:

A galaxy merger is a slow process lasting more than a billion years as two galaxies, under the inexorable pull of gravity, dance toward each other before finally joining together.

Simulations reveal that galaxies kick up plenty of gas and dust as they undergo this slow-motion train wreck. 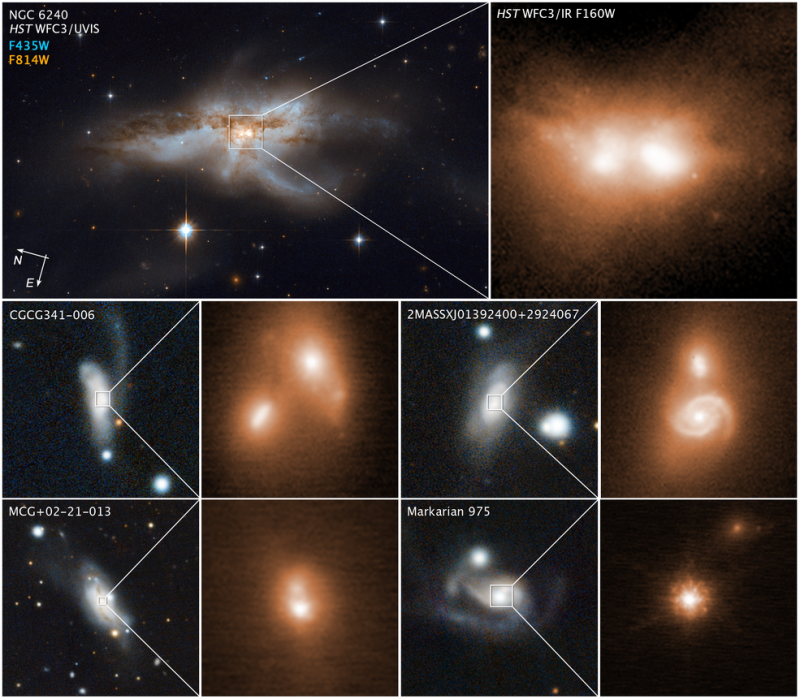 Upper left: Hubble snapshots of NGC 6240, which is known to have a double nuclei, or core, and thought to be a place where 2 galaxies are colliding. Images of 4 other colliding galaxies, along with close-up views of their coalescing nuclei in the bright cores, are shown beneath NGC 6240. The left image of each pair, showing the merging galaxies, was taken by the Panoramic Survey Telescope and Rapid Response System (Pan-STARRS). The right image, showing the bright cores, was taken in near-infrared light by the W. M. Keck Observatory in Hawaii, using adaptive optics to sharpen the view. The nuclei in each of the Hubble and Keck Observatory infrared photos are only about 3,000 light-years apart — a near-embrace in cosmic terms. If there are pairs of black holes, they will likely merge within the next 10 million years to form a more massive black hole. Image via NASA/ESA/M. Koss (Eureka Scientific, Inc.)/W. M. Keck Observatory/Panoramic Survey Telescope and Rapid Response System (Pan-STARRS).

The astronomers described the scene this way:

The ejected material often forms a thick curtain around the centers of the coalescing galaxies, shielding them from view in visible light. Some of the material also falls onto the black holes at the cores of the merging galaxies. The black holes grow at a fast clip as they engorge themselves with their cosmic food, and, being messy eaters, they cause the infalling gas to blaze brightly. This speedy growth occurs during the last 10 million to 20 million years of the union. The Hubble and Keck Observatory images captured close-up views of this final stage, when the bulked-up black holes are only about 3,000 light-years apart — a near-embrace in cosmic terms.

It’s not easy to find galaxy nuclei so close together. Most prior observations of colliding galaxies have caught the coalescing black holes at earlier stages when they were about 10 times farther away. The late stage of the merger process is so elusive because the interacting galaxies are encased in dense dust and gas and require high-resolution observations in infrared light that can see through the clouds and pinpoint the locations of the two merging nuclei.

Gas falling onto the black holes emits X-rays, and the brightness of the X-rays tells you how quickly the black hole is growing. I didn’t know if we would find hidden mergers, but we suspected, based on computer simulations, that they would be in heavily shrouded galaxies.Therefore we tried to peer through the dust with the sharpest images possible, in hopes of finding coalescing black holes.

The researchers combed through the Hubble archive, identifying those merging galaxies they spotted in the X-ray data. They then used the Keck Observatory’s super-sharp, near-infrared vision to observe a larger sample of the X-ray-producing black holes not found in the Hubble archive. Koss said:

People had conducted studies to look for these close interacting black holes before, but what really enabled this particular study were the X-rays that can break through the cocoon of dust. We also looked a bit farther in the universe so that we could survey a larger volume of space, giving us a greater chance of finding more luminous, rapidly growing black holes.

Many of the galaxies within the survey distance of 330 million light-years are similar in size to the Milky Way and Andromeda galaxies. The team analyzed 96 galaxies from the Keck Observatory and 385 galaxies from the Hubble archive found in 38 different Hubble observation programs. The sample galaxies are representative of what astronomers would find by conducting an all-sky survey.

To verify their results, Koss’s team compared the survey galaxies with 176 other galaxies from the Hubble archive that lack actively growing black holes. The comparison confirmed that the luminous cores found in the researchers’ census of dusty interacting galaxies are indeed a signature of rapidly growing black-hole pairs headed for a collision. The astronomers also said:

When the two supermassive black holes in each of these systems finally come together in millions of years, their encounters will produce strong gravitational waves. Gravitational waves produced by the collision of two stellar-mass black holes have already been detected by the Laser Interferometer Gravitational-Wave Observatory (LIGO). Observatories such as the planned NASA/ESA space-based Laser Interferometer Space Antenna (LISA) will be able to detect the lower-frequency gravitational waves from supermassive black-hole mergers, which are a million times more massive than those detected by LIGO.

Future infrared telescopes, such as NASA’s planned James Webb Space Telescope and a new generation of giant ground-based telescopes, will provide an even better probe of dusty galaxy collisions by measuring the masses, growth rate, and dynamics of close black-hole pairs. The Webb telescope may also be able to look in mid-infrared light to uncover more galaxy interactions so encased in thick gas and dust that even near-infrared light cannot penetrate them.

Bottom line: Astronomers observe in the near-infrared to peer through clouds of dust and gas in the cores of distant, merging galaxies, and observe supermassive black holes forming mega black holes.

Via University of Florida and NASA.