A study looks at differences in the ways that men and women’s bodies react to time spent in space. 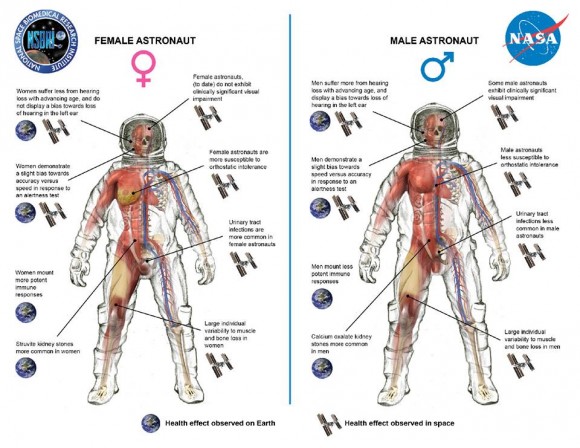 A new study used years of biological data on male and female astronauts in the International Space Station to look at physiological and behavioral differences in the way that men and women adapt to spaceflight. It found no evidence of sex differences in terms of behavioral or psychological responses to spaceflight, and no no sex or gender differences in neurobehavioral performance and sleep measures. However, it did identify some differences, outlined below. The Journal of Women’s Health published the study in November 2014.

We know that on Earth, major components of the human body are influenced by sex and gender factors. Taking gravity away from the equation imposes an entirely new element on the understanding of the health implications of sex and gender differences. That’s why NASA, in partnership with the National Space Biomedical Research Institute (NSBRI), created work groups to investigate personalized medicine for astronauts who may spend years living and working autonomously away from planet Earth. These groups are who identified the sex- and gender-related differences in this study.

The research groups observed that there’s an imbalance of data available for men and women, primarily due to fewer women who have flown in space – 477 men versus 57 women as of June 2013 – which makes it difficult to derive concrete conclusions based on sex and gender alone.

Here’s a summary of the Sex & Gender work groups’ other major findings:

– Orthostatic Intolerance, or the inability to stand without fainting for protracted periods, is more prevalent upon landing in female astronauts than in their male counterparts. One possible reason for this observed difference in orthostatic intolerance between the sexes is reduced leg vascular compliance, which was demonstrated in bed-rest studies – which is a ground analog for spaceflight.

– Women have greater loss of blood plasma volume than men during spaceflight, and women’s stress response characteristically includes a heart rate increase while men respond with an increase in vascular resistance. Still, these Earth observations require further study in space.

– The VIIP syndrome (visual impairment / intracranial pressure) manifests with anatomical ocular changes, ranging from mild to clinically significant, with a range of corresponding changes in visual function. Currently 82% of male astronauts vs. 62% of women astronauts (who have flown in space) are affected. However, all clinically significant cases so far have occurred in male astronauts.

– Changes in function and concentration of key constituents of the immune system related to spaceflight have been reported. However, differences between male and female immune responses have not been observed in space. On the ground, women mount a more potent immune response than men, which makes them more resistant to viral and bacterial infections; once infected, women mount an even more potent response. This response, however, makes women more susceptible to autoimmune diseases. It is not clear if these changes on the ground will occur during longer space missions, or missions that involve planetary exploration (exposure to gravity).

– Radiation presents a major hazard for space travel. It has been reported that female subjects are more susceptible to radiation-induced cancer than their male counterparts; hence radiation permissible exposure levels are lower for women than men astronauts.

– Upon transition to microgravity after arriving at the International Space Station (ISS), female astronauts reported a slightly higher incidence of space motion sickness (SMS) compared with men. Conversely, more men experience motion-sickness symptoms upon return to Earth. These data were however not statistically significant, due both to the relatively small sample sizes and small differences in the incidence of SMS reported by the men and women astronauts.

– Hearing sensitivity, when measured at several frequencies, declines with age much more rapidly in male astronauts than it does in female astronauts. No evidence suggests that the sex-based hearing differences in the astronaut population are related to microgravity exposure.

– The human musculoskeletal response to gravity unloading is highly variable among individuals and a sex-based difference was not observed.

– Urinary tract infections in space are more common in women and have been successfully treated with antibiotics. 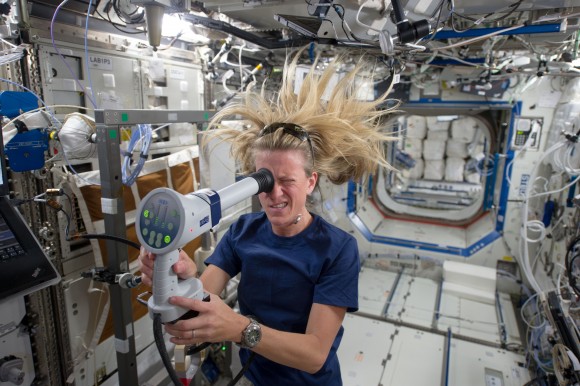 Visual Impairment Intracranial Pressure (VIIP) Syndrome was identified in 2005. It is currently NASA’s leading spaceflight-related health risk, and is more predominant among men than women in space. Here, NASA astronaut Karen Nyberg uses a fundoscope to image her eye while in orbit. Image credit: NASA

– Encourage and facilitate the participation of more female and male subjects in both ground and flight research studies.

– Focus on the responses of individual astronauts to spaceflight and return to Earth.

– Include sex and gender factors in the design of the experiments.

Fortunately, we have the International Space Station. The Station provides us with years of biological data on male and female astronauts, and many of them continue to participate in ground-based studies to evaluate the lasting effects of spaceflight.

Although in recent years the definitions have become more nuanced in the clinical community, “sex” is defined here as the classification of male or female according to an individual’s genetics and “gender” refers to a person’s self-representation as male or female based upon social interactions.

The Impact of Sex and Gender on Adaptation to Space, a compendium of the work groups’ six individual manuscripts, an executive summary, and a commentary is available here.

Bottom line: NASA, in partnership with the NSBRI, created work groups to investigate physiological and behavioral differences in the way that men and women adapt to spaceflight.