Mars to lose a moon, gain a ring

Mars’ large moon Phobos is slowly falling toward the planet. In 20-40 million years, it’ll shatter, and its pieces will form a Saturn-like ring around Mars. 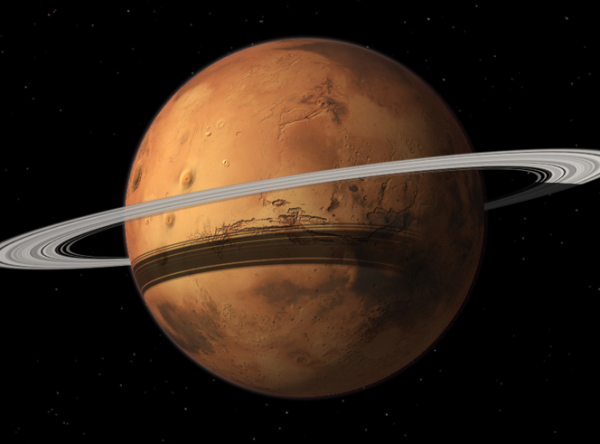 Mars could gain a ring in 10-20 million years when its moon Phobos is torn to shreds by Mars gravity. Image of how Mars might look by Tushar Mittal using Celestia 2001-2010, Celestia Development Team.

Mars’ largest moon, Phobos, is slowly falling toward the planet. But rather than smash into the surface, Phobos will likely be torn to shreds by the planet’s gravity and the pieces strewn about Mars in a ring, like the rings encircling Saturn, Jupiter, Uranus and Neptune.

Though inevitable, the demise of Phobos is not imminent, say scientists. It will probably happen in 20 to 40 million years, leaving a ring that will persist for anywhere from one million to 100 million years, according to two young earth scientists at the University of California, Berkeley.

In a paper appearing online in Nature Geoscience on November 23, 2015, the researchers estimate the cohesiveness of Phobos and conclude that it is insufficient to resist the tidal forces that will pull it apart when it gets closer to Mars.

Just as earth’s moon pulls on our planet in different directions, raising tides in the oceans, for example, so too Mars tugs differently on different parts of Phobos. As Phobos gets closer to the planet, the tugs are enough to actually pull the moon apart, the scientists say. This is because Phobos is highly fractured, with lots of pores and rubble. Dismembering it is analogous to pulling apart a granola bar, Black said, scattering crumbs and chunks everywhere.

The resulting rubble from Phobos – rocks of various sizes and a lot of dust – would continue to orbit Mars and quickly distribute themselves around the planet in a ring.

While the largest chunks would eventually spiral into the planet and collide at a grazing angle to produce egg-shaped craters, the majority of the debris would circle the planet for millions of years until these pieces, too, drop onto the planet in ‘moon’ showers, like meteor showers. Only Mars’ other moon, Deimos, would remain. 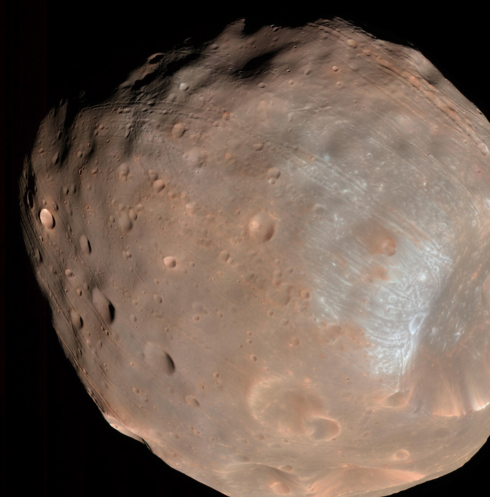 Phobos is a lumpy, fractured moon that will be torn apart by Mars’ gravity when it gets too close to the planet. Image credit: NASA

The researchers, postdoctoral fellow Benjamin Black and graduate student Tushar Mittal, both in University of California, Berkeley’s Department of Earth and Planetary Science, were drawn to the question of what might happen to Phobos because its fate is expected to be so different from that of most other moons in our solar system. Black said:

Only one other moon in the solar system, Neptune’s largest moon, Triton, is known to be moving closer to its planet.

Studying such moons is relevant to conditions in our early solar system, Mittal said, when it’s likely there were many more moons around the planets that have since disintegrated into rings – the suspected origins of the rings of the outer planets. Some studies estimate that during planet formation, 20-30 percent of planets acquire moons moving inward and destined for destruction, though they would have long since disappeared. Some of Mars’ several thousand elliptical craters may even have been formed by remnants of such moonlets crashing to the surface at a grazing angle.

To estimate the strength of Phobos, Black and Mittal looked data from similarly fractured rocks on Earth and from meteorites that struck Earth and have a density and composition similar to Phobos. They also constrained the strength of Phobos based on results from simulations of the 10-kilometer diameter Stickney impact crater, which formed in the past when a rock rammed into Phobos without quite smashing the moon apart. That crater spans about one-sixth the circumference of Phobos and looks as if someone took a scoop out of the moon. 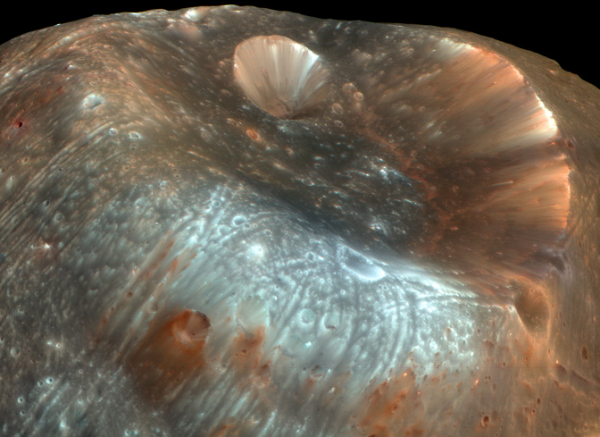 The Stickney crater at one end of Phobos was created by an impact that could have torn Phobos apart if the moon were less fractured and porous. Image from 2009. Image credit: NASA

Once they determined when and how they expected tidal forces to tear Phobos apart, Mittal modeled the evolution of the ring, adapting techniques developed to understand Saturn’s rings. Mittal said:

If the moon broke apart at 1.2 Mars radii, about 680 kilometers above the surface, it would form a really narrow ring comparable in density to that of one of Saturn’s most massive rings. Over time it would spread out and get wider, reaching the top of the Martian atmosphere in a few million years, when it would start losing material because stuff would keep raining down on Mars.

If the moon breaks up farther from Mars, the ring could persist for 100 million years before raining down on Mars, they found.

Mittal said it’s not clear whether the dust and debris rings would be visible from earth, since dust does not reflect much sunlight, whereas ice in the rings of the outer planets makes them easily visible. But Mars’ ring may reflect enough light to make Mars slightly brighter as seen from Earth, he said, and through a telescope the shadows of the rings might also be visible on the surface. Black said:

Standing on the surface of Mars a few tens of millions of years from now, it would be pretty spectacular to watch.

Bottom line: Mars’ largest moon, Phobos, is slowly falling toward the planet. According to research published in Nature Geoscience on November 23, 2015, rather than smashing into the surface, Phobos will likely be torn to shreds by the planet’s gravity and the pieces strewn about Mars in a ring. It will probably happen in 20 to 40 million years, say the University of California, Berkeley researchers.