A cool animation showing now and long ago at Gale Crater, plus the path of the Curiosity rover on Mars today, and an update on Curiosity’s findings.

This pair of drawings depicts Gale Crater at two points in time: now and billions of years ago. Water moving beneath the ground, as well as water above the surface in ancient rivers and lakes, provided favorable conditions for microbial life, scientists say. However, as yet, no life has been found. Image via NASA JPL/ Caltech.

When the Curiosity rover landed in Mars’ Gale Crater in 2012, the mission’s main goal was to look for signs of water and determine whether the area ever offered an environment favorable for microbial life. And that’s exactly what the rover has been doing, while investigating rock layers in the floor of Gale Crater on Mars and on the crater’s central peak (Mount Sharp). On December 13, 2016, at the American Geophysical Union meeting in San Francisco, scientists spoke of Curiosity’s recent results and said the information recorded in Mars’ rocks shows how its environment has changed over time. They said the change in Mars’ ancient lakes and wet underground environments, billions of years ago, created more diverse chemical environments that affected their favorability for microbial life.

John Grotzinger of Caltech, a member of Curiosity’s science team, spoke of the rover’s findings as a “jackpot” because, he said:

There is so much variability in the composition at different elevations…

He said that, as the rover examines higher, younger layers on Mount Sharp, researchers have been impressed by the complexity of the lake environments that once existed there. These researchers said in a statement:

Hematite, clay minerals and boron are among the ingredients found to be more abundant in layers farther uphill, compared with lower, older layers examined earlier in the mission. [We] are discussing what these and other variations tell about conditions under which sediments were initially deposited, and about how groundwater moving later through the accumulated layers altered and transported ingredients.

A sedimentary basin such as this is a chemical reactor. Elements get rearranged. New minerals form and old ones dissolve. Electrons get redistributed. On Earth, these reactions support life.

Has the rover found evidence for martian life? No. Scientists for decades have searched for evidence of life on Mars, but – to date – no compelling evidence for it has been found.

Still, the results from Curiosity – as has been true of evidence gathered elsewhere on Mars – is tantalizing. 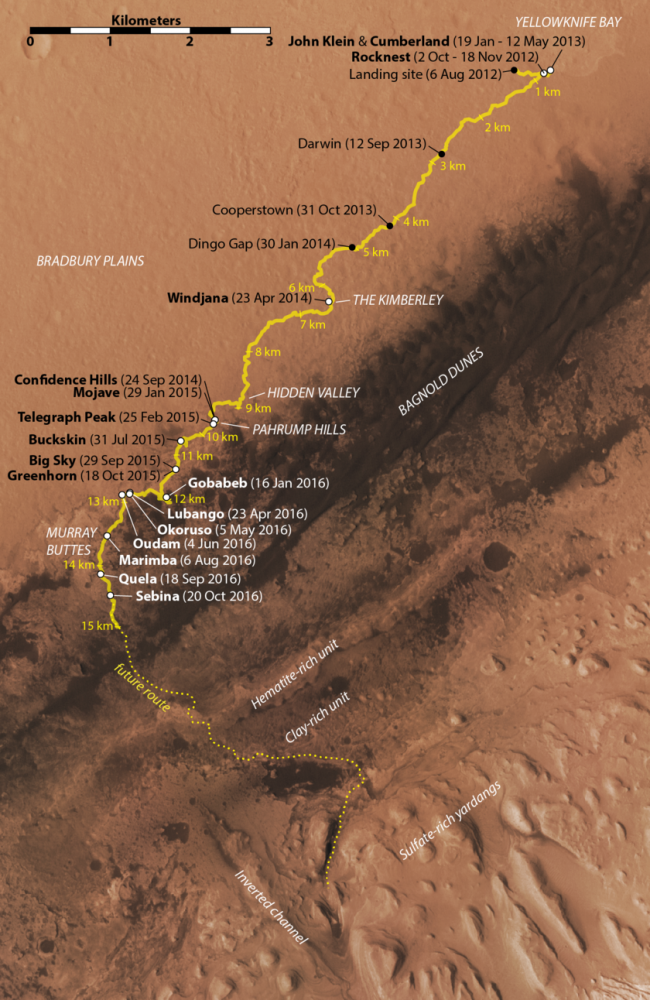 A wide view of Curiosity’s traverse from landing through sol 1536. At this point, since landing on Mars in 2012, the rover has driven just over 9 miles (about 15 km). The base image is from Mars Reconnaissance Orbiter CTX, colorized with Mars Express HRSC image. The route is copied from official mission maps. White circles represent drill sites; filled circles mark a few locations along the traverse between Yellowknife Bay and The Kimberley where there was some science but no drilling. The future route map is based upon the proposal for Curiosity’s second mission extension. Image via Emily Lakdawalla’s blog at the Planetary Society.

The researchers said Gale Crater’s main appeal for them is in the geological layering exposed in the lower portion of the crater’s central mound, Mount Sharp. They said:

These exposures offer access to rocks that hold a record of environmental conditions from many stages of early martian history, each layer younger than the one beneath it. The mission succeeded in its first year, finding that an ancient martian lake environment had all the key chemical ingredients needed for life, plus chemical energy available for life. Now, the rover is climbing lower on Mount Sharp to investigate how ancient environmental conditions changed over time.

We are well into the layers that were the main reason Gale Crater was chosen as the landing site. We are now using a strategy of drilling samples at regular intervals as the rover climbs Mount Sharp. Earlier we chose drilling targets based on each site’s special characteristics. Now that we’re driving continuously through the thick basal layer of the mountain, a series of drill holes will build a complete picture.

These scientists said that four recent drilling sites – from “Oudam” this past June through “Sebina” in October – are each spaced about 80 feet (about 25 meters) apart in elevation. This uphill pattern allows the science team to sample progressively younger layers that reveal Mount Sharp’s ancient environmental history.

Read Emily Lakdawalla’s most recent update on Curiosity at her blog at the Planetary Society. 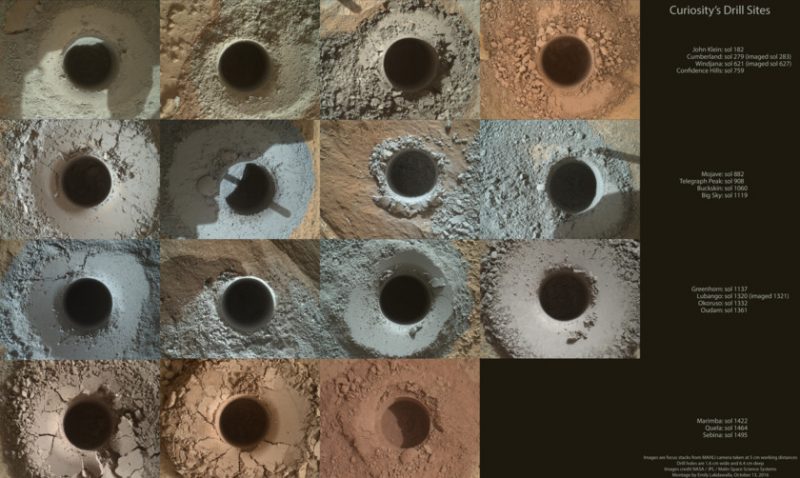