When a solar storm bathed the Mars rover Curiosity – now en route to Mars – in radiation, the rover acted as a stunt double for astronauts.

Update on a space traveler! In late January 2012, an intense solar storm made a lot of news, but it also provided scientists an opportunity to study the dangers facing astronauts on long-term spaceflights. The storm hit the new Mars rover Curiosity, currently en route to Mars, and the rover took data on the storm, allowing scientists to increase their understanding of how radiation in space will affect future astronauts.

In other words, the Mars rover acted as a stunt double for astronauts, NASA said. It took the hit and came up healthy as ever. 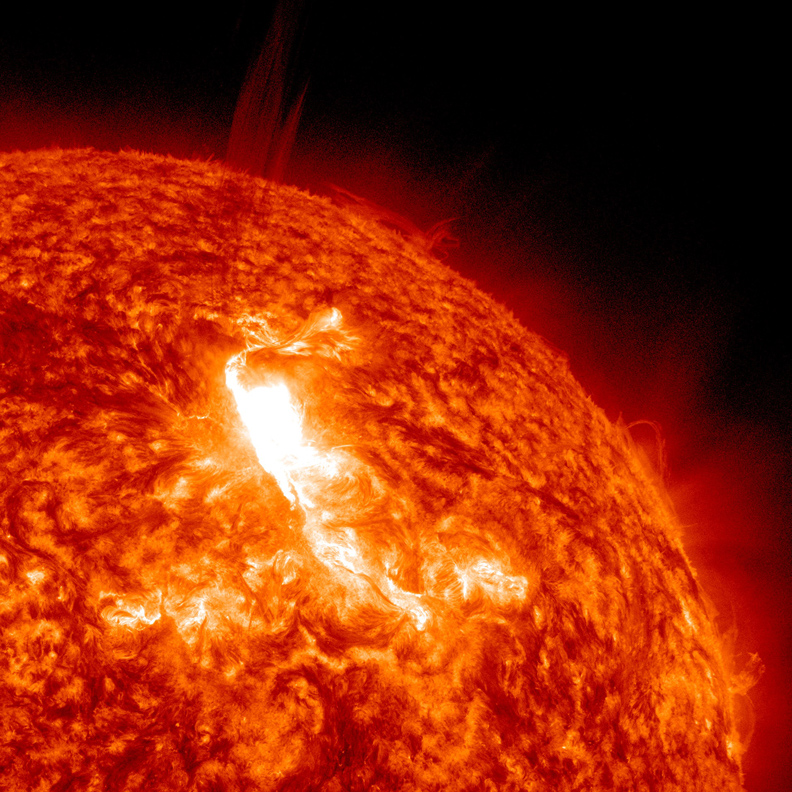 NASA said the storm was “the most intense solar storm since 2005.” It originated when sunspot AR1402 produced an X2-class solar flare. X-class flares are the most intense solar storms. During the January 2012 storm, extreme amounts of photons and electrons erupted into space at nearly the speed of light and headed straight in Curiosity’s direction. When the particles hit Curiosity, they fragmented further in a pattern so complex even supercomputers had a hard time representing it.

Curiosity carries an instrument called the Radiation Assessment Detector, or RAD, which the previous Mars rovers did not have. Scientists developed in primarily to study radiation levels on the surface of Mars, but it provides the added benefit of allowing them to measure the affects of radiation on the rover as it travels through space. Curiosity is located in the belly of its spacecraft, which is exactly where astronauts on a flight to Mars would be.

A photo of the Radiation Assessment Detector (RAD) in the laboratory.

Curiosity was in no danger. In fact, we intended all along for the rover to experience these storms en route to Mars. We have a pretty good idea what the radiation environment is like outside. Inside the spacecraft, however, is still a mystery. It’s very complicated. Curiosity is giving us a chance to actually measure what happens

The solar storm is not the last opportunity for Curiosity to perform such work. Far-away black holes and supernovae also emit such particles, which travel great distances across space, producing measurable radiation in our solar system. The rover still has six months before its August 6, 2012 landing on Mars, and the sun is in an active part of its 11-year cycle. So there is definitely the possibility of another solar storm. Ultimately, RAD will produce results that help us prepare for an eventual human trip to Red Planet.

Bottom line: A January 22, 2012 solar storm provided scientists an opportunity to study the dangers facing astronauts on long-term spaceflights. The storm hit the new Mars rover Curiosity, currently en route to Mars, and the rover took data on the storm.