A panoramic view of the desert world next door, from one of the highest elevations reached by the Mars rover Opportunity in its 11 years on the Red Planet.

Eleven years on Mars for the rover Opportunity! And the robotic rover is still working. The rover’s work on Mars was initially planned for three months. It marked the 11th anniversary of its own January 25, 2004 landing on Mars with a new panorama, gained from the top of the Cape Tribulation segment of the rim of Endeavour Crater. The rover had reached this point three weeks before acquiring the panorama on January 22, 2015.

This location is the highest elevation Opportunity has reached since departing the Victoria Crater area in 2008 on a three-year, down-slope journey to Endeavour Crater. Endeavour spans about 14 miles (22 kilometers) in diameter, with its interior and rim laid out in this 245-degree panorama centered toward east-northeast. Rover tracks imprinted during the rover’s approach to the site appear on the left.

The panorama’s component images were taken with Opportunity’s panoramic camera (Pancam) during the days after the rover’s arrival at the summit on January 6, 2015, the 3,894th Martian day, or sol, of the rover’s work on Mars.

The Mars Opportunity rover has driven 25.9 miles (41.7 kilometers) since it landed in the Meridiani Planum region of Mars on January 25, 2004. That is farther than any other off-Earth surface vehicle has driven. During its prime mission and for more than a decade of bonus performance in extended missions, Opportunity has returned compelling evidence about wet environments on ancient Mars.

Opportunity has been exploring Endeavour’s western rim since 2011. From a low segment of the rim that it crossed in mid-2013, called Botany Bay, it climbed about 440 feet (about 135 meters) in elevation to reach the top of Cape Tribulation. That’s about 80 percent the height of the Washington Monument. 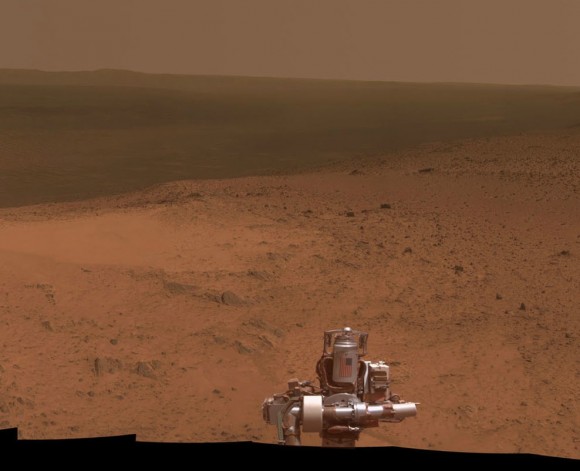 At the summit, Opportunity held out its robotic arm so that the U.S. flag would be visible in the scene. The flag is printed on the aluminum cable guard of the rover’s rock abrasion tool, which is used for grinding away weathered rock surfaces to expose fresh interior material for examination. The flag is intended as a memorial to victims of the September 11, 2001, attacks on the World Trade Center in New York. The aluminum used for the cable guard was recovered from the site of the twin towers in the weeks following the attacks. Workers at Honeybee Robotics in lower Manhattan, less than a mile from the World Trade Center, were making the rock abrasion tool for Opportunity and NASA’s twin Mars Exploration Rover, Spirit, in September 2001. Image via NASA/JPL 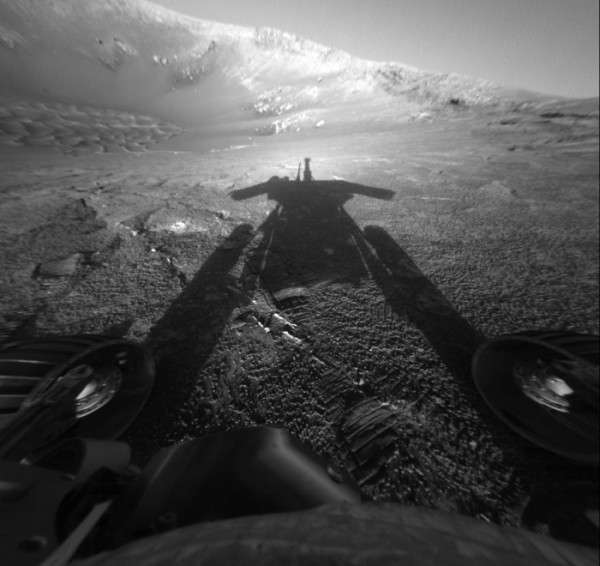 Opportunity catches its shadow on Mars. Image via NASA/JPL-Caltech/Texas A&M/Cornell. 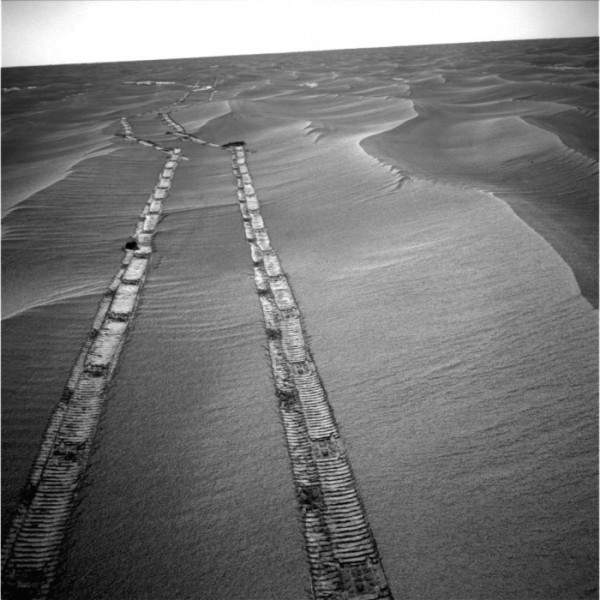 Opportunity looks backwards while on the move. Image via NASA/JPL-Caltech/Texas A&M/Cornell

Bottom line: NASA/JPL released a panorama from one of the highest elevations that NASA’s Mars Exploration Rover Opportunity has yet reached to mark its 11th anniversary on Mars. The image includes the U.S. flag at the summit.

Art from Mars – the best pictures