Mars Reconnaissance Orbiter, and Mars rovers Curiosity and Opportunity, have all tried to image Comet ISON in recent days as it swept past Mars. The orbiter’s image is here.

The Mars Reconnaissance Orbiter’s HiRISE camera has produced some stunning images of Mars’ surface. If the Comet ISON image acquired by the orbiter on September 30 – the day before the comet was closest to Mars – appears lackluster, that may be because the comet itself continues to appear fainter than expected. Scientists are happy, however, because the fainter Comet ISON with what they called “low coma activity” is best for determining the size of the comet’s nucleus, or core. That knowledge in turn is important because the size of Comet ISON’s nucleus will in part determine whether the comet will, or won’t, break up when it passes within 800,000 miles (1.2 million km) of our sun on Thanksgiving Day 2013. 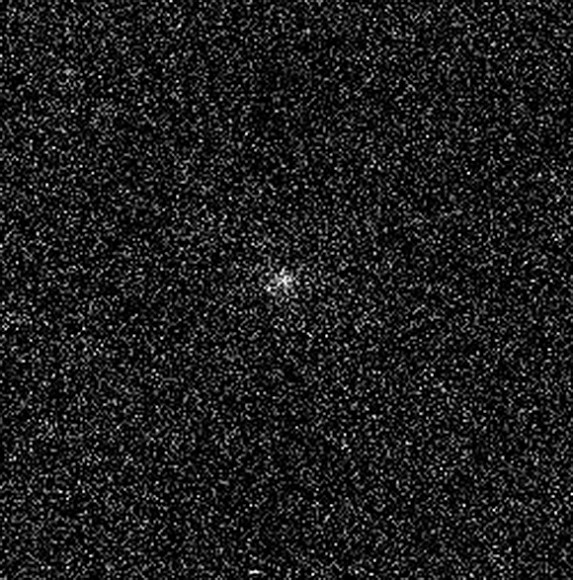 Image of Comet ISON acquired on September 30, 2013 with the HiRISE camera on NASA’s Mars Reconnaissance Orbiter. This is a preliminary single (non-stacked) image, and appears fuzzy in part because it still contains noise and background stars.

Comet ISON will pass over 100 times closer to the sun than Earth. This close pass to the sun might cause Comet ISON to break to pieces, and, if that happens, the comet is likely to fizzle. But it’s still possible ISON might emerge from perihelion bright enough to see with the eye, with a comet tail.

The HiRISE team acknowledged that Comet ISON is fainter than expected, but wrote hopefully:

The comet, like Mars, is currently 241 million kilometers from the Sun. As the comet gets closer to the sun, its brightness will increase to Earth-based observers and the comet may also become intrinsically brighter as the stronger sunlight volatilizes the comet’s ices.

The HiRISE team didn’t published a size for the comet’s nucleus on its website, by the way. They did mention they were going to be observing the comet October 1 and October 2, so presumably they are waiting for more data. We can also expect more images, since the comet’s closest point to Mars was October 1.

Bottom line: Scientists have released an image of Comet ISON taken by the Mars Reconnaissance Orbiter’s HiRISE camera on the day before Comet ISON swept closest to Mars.

Read the HiRISE team’s explanation of this image