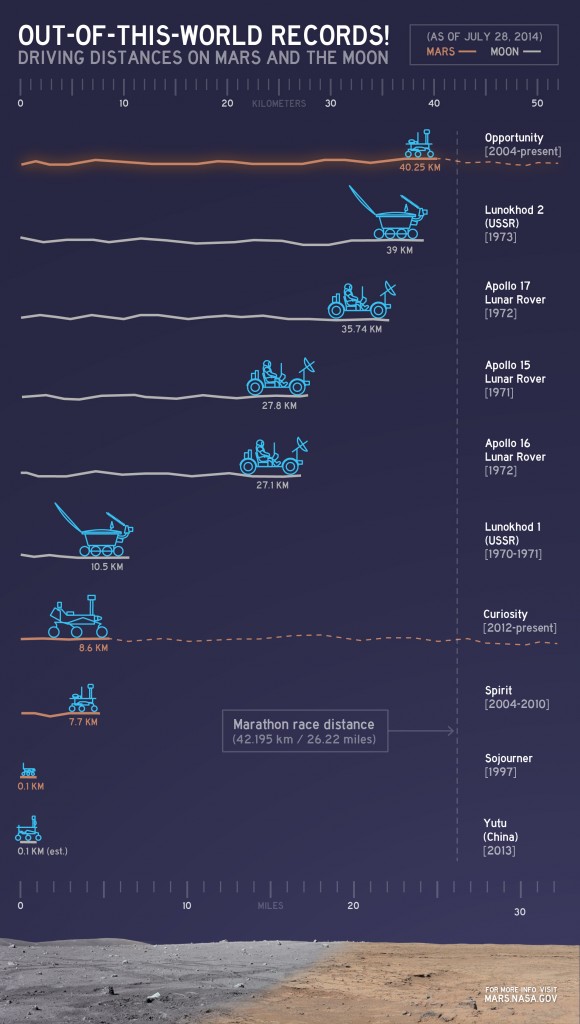 The chart above provides a comparison of the distances driven by various wheeled vehicles on the surface of Mars and Earth’s moon. Of the vehicles shown, NASA’s Mars rovers Opportunity and Curiosity are still active and the totals listed are distances driven as of July 28, 2014. The day before, July 27, the Opportunity rover passed 25 miles driven – an off-world driving distance record. Opportunity has gone farther than any other earthly wheeled vehicle on another world. It’s especially remarkable, NASA says, because Opportunity was intended to drive about one kilometer (.6 mile) and was never designed for distance.

If the rover can continue to operate the distance of a marathon – 26.2 miles (about 42.2 kilometers) – it’ll approach the next major investigation site mission scientists have dubbed Marathon Valley.

Observations from spacecraft orbiting Mars suggest several clay minerals are exposed close together at this valley site, surrounded by steep slopes where the relationships among different layers may be evident. 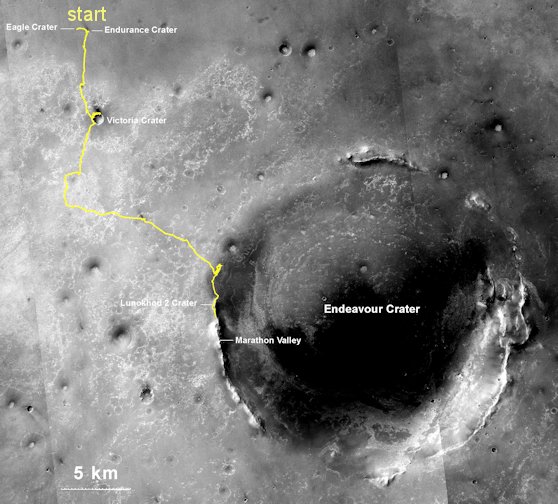 NASA’s Mars Exploration Rover Opportunity, working on Mars since January 2004, passed 25 miles of total driving on July 27, 2014. The gold line on this map shows Opportunity’s route from the landing site inside Eagle Crater (upper left) to its location after the July 27 (Sol 3735) drive. Image credit: NASA/JPL-Caltech/MSSS/NMMNHS

The runner up in off-world distance driving is a Russian vehicle, the Lunokhod 2 rover. A successor to the first Lunokhod mission in 1970, Lunokhod 2 landed on Earth’s moon on January 15, 1973. The rover drove about 24.2 miles (39 kilometers) in less than five months, according to calculations recently made using images from NASA’s Lunar Reconnaissance Orbiter (LRO) cameras, which reveal Lunokhod 2’s tracks.