Researchers estimate that if the massive ice deposits melted, they’d cover the planet in 5 feet (1.5 meters) of water. 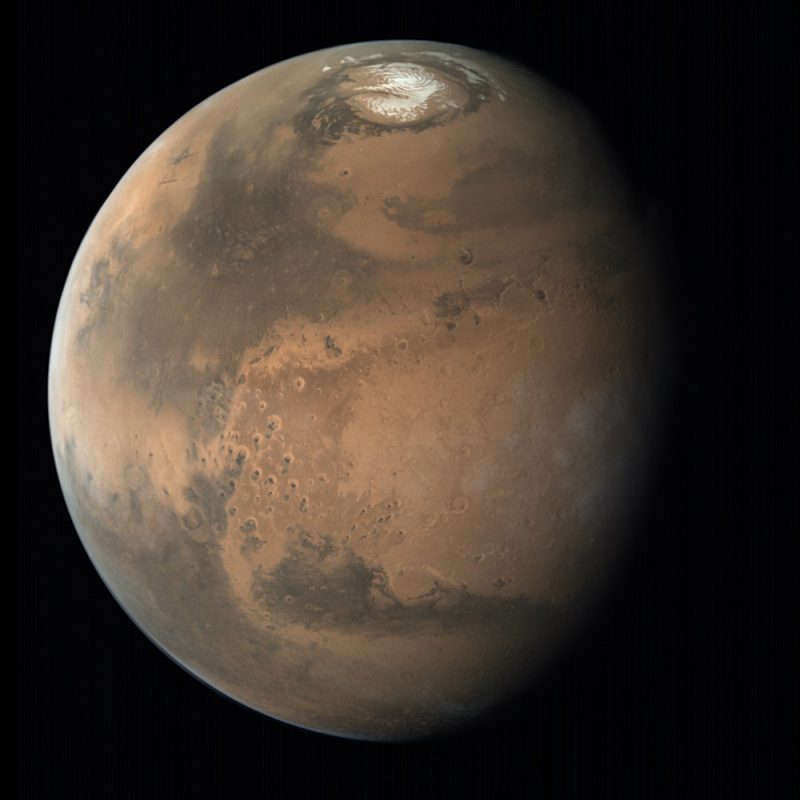 Scientists have discovered remnants of ancient ice sheets buried in sand a mile (1.6 km) beneath Mars’ north pole, they report in a new study.

The team found layers of sand and ice that were as much as 90 percent water in some places. If it melted, the newly-discovered ice would be equivalent to a global layer of water around Mars at least 5 feet (1.5 meters) deep, which could be one of the largest water reservoirs on the planet, according to the researchers. 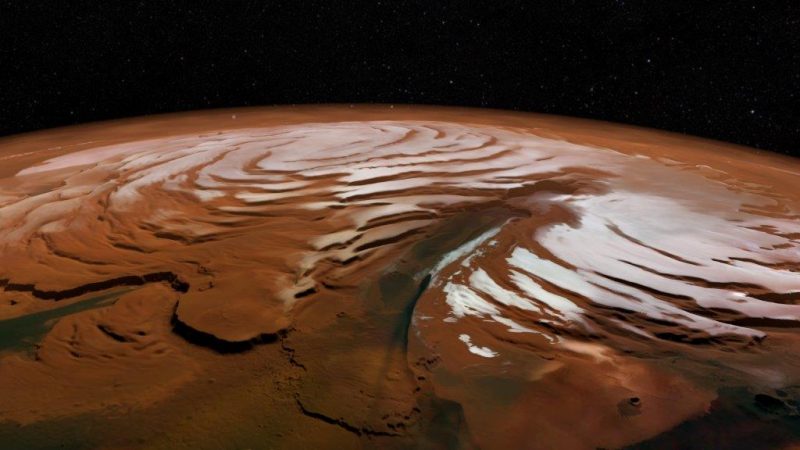 Stefano Nerozzi is a graduate research assistant at the University of Texas Institute for Geophysics and lead author of the new study, published May 22, 2019, in the peer-reviewed journal Geophysical Research Letters, He said in a statement:

We didn’t expect to find this much water ice here. That likely makes it the third largest water reservoir on Mars after the polar ice caps.

The researchers made the discovery using measurements gathered by an instrument on NASA’s Mars Reconnaissance Orbiter, called SHARAD, that emits radar waves that can penetrate up to a mile and a half (2.4 km) beneath Mars’s surface.

The layers of ice are a record of past climate on Mars in much the same way that tree rings are a record of past climate on Earth, according to the researchers. They suspect the layers formed when ice accumulated at the poles during past ice ages on Mars. Each time the planet warmed, a remnant of the ice caps became covered by sand, which protected the ice from solar radiation and prevented it from dissipating into the atmosphere.

Here’s more from a statement from the researchers:

Scientists have long known about glacial events on Mars, which are driven by variations in the planet’s orbit and tilt. Over periods of about 50,000 years, Mars leans toward the sun before gradually returning to an upright position, like a wobbling spinning top. When the planet spins upright, the equator faces the sun, allowing the polar ice caps to grow. As the planet tilts, the ice caps retreat, perhaps vanishing entirely.

Until now, scientists thought the ancient ice caps were lost. The new findings show that in fact significant ice sheet remnants have survived under the planet’s surface, trapped in alternating bands of ice and sand, like layers on a cake.

The photograph, taken with the HiRISE camera aboard NASA’s Mars Reconnaissance Orbiter, was adjusted to show water ice as light-colored layers and sand as darker layers of blue. The tiny bright white flecks are thin patches of frost. Image via NASA/JPL/University of Arizona.

Jack Holt is a professor at the Lunar and Planetary Laboratory of the University of Arizona and co-author of the new study. He said:

Surprisingly, the total volume of water locked up in these buried polar deposits is roughly the same as all the water ice known to exist in glaciers and buried ice layers at lower latitudes on Mars, and they are approximately the same age.

Studying this record of past polar glaciation could help determine whether Mars was ever habitable, according to Nerozzi.

Understanding how much water was available globally versus what’s trapped in the poles is important if you’re going to have liquid water on Mars.You can have all the right conditions for life, but if most of the water is locked up at the poles, then it becomes difficult to have sufficient amounts of liquid water near the equator.

The findings were corroborated by an independent study using gravity data instead of radar, also published today in Geophysical Research Letters.

Bottom line: Scientists have discovered remnants of ancient ice sheets on Mars buried in sand a mile (1.6 km) beneath Mars’ north pole, which, if melted, could cover the entire planet 5 feet (1.5 m) deep in water.

Source: Buried ice and sand caps at the north pole of Mars: revealing a record of climate change in the cavi unit with SHARAD