Evidence of flowing water on Mars

Mars is a desert world, but it’s not completely dry. Scientists have found liquid water flowing on Mars. 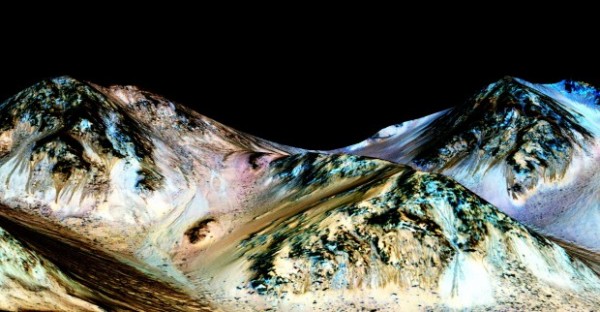 These dark streaks are called recurring slope lineae. They are a seasonal phenomenon on Mars. Scientists now say the streaks are evidence of flowing water on Mars. The streaks are shown here in a false-color image from NASA’s Mars Reconnaissance Orbiter. Image via NASA / JPL / Univ. of Arizona.

NASA announced this morning (September 28, 2015) that its researchers have found liquid water flowing, or at least trickling, on the surface of Mars. NASA scientists announced these results at a news conference today, simultaneous with the publication of a new paper in Nature Geoscience. Analysis of imagery from the Mars Reconnaissance Orbiter has confirmed salty water flowing down Martian slopes. This flowing water is responsible for the fascinating seasonal dark streaks on Mars – called recurring slope lineae by scientists – which are seen in places on the planet’s surface. Three of the paper’s co-authors spoke NASA’s news conference, which was broadcast on NASA-TV.

The streaks themselves extend up to 16 feet (5 meters) in width and tens or hundreds of feet in length. They appear to ebb and flow on Mars. In a way reminiscent of Percival Lowell’s early notions of plants coming and going in a seasonal cycle on Mars (a notion later proved wrong), these recurring slope lineae come and go with the Martian seasons. They darken and appear to flow down steep slopes during warm seasons and then fade in cooler seasons.

The dark streaks appear year after year in places on Mars where temperatures reach zero to 30 degrees Fahrenheit (250 to 273 Kelvin).

Lujendra Ojha of the Georgia Institute of Technology (Georgia Tech) in Atlanta is lead author of the new study (he also happens to be a death metal guitarist, by the way). He first noticed the dark streaks as a University of Arizona undergraduate student in 2010, via images from the Mars Reconnaissance Orbiter’s great instrument called the High Resolution Imaging Science Experiment (HiRISE). He and his colleagues theorized at the time that flowing water was the cause of the streaks.

HiRISE observations later have documented the mysterious dark streaks at dozens of sites on Mars. Ojha said of the new study:

We found the hydrated salts only when the seasonal features were widest, which suggests that either the dark streaks themselves or a process that forms them is the source of the hydration.

In either case, the detection of hydrated salts on these slopes means that water plays a vital role in the formation of these streaks.

What is the source of this Mars water? The new paper doesn’t definitively pinpoint a source, but suggests the water might be melting subsurface ice, or it might be the result of salts thought to be in the Martian soil, pulling water out of the thin Martian atmosphere. Or, perhaps most intriguingly, it’s possible liquid might even be bubbling up from unknown aquifers below Mars’ surface.

The salt in the water is important, by the way. It keeps the water from freezing on Mars, a cold desert world, whose closest Earth analog is Antarctica. 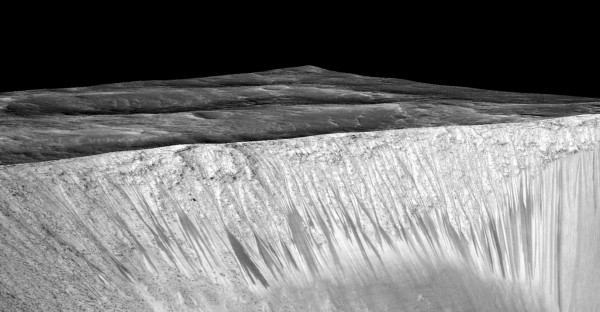 Dark narrow streaks called ‘recurring slope lineae’ emanating out of the walls of Garni crater on Mars. The dark streaks here are up to few hundred meters in length. They are hypothesized to be formed by flow of briny liquid water on Mars. Streaks like these can be seen in spacecraft images at dozens of sites on Mars. Image via NASA/JPL/University of Arizona. 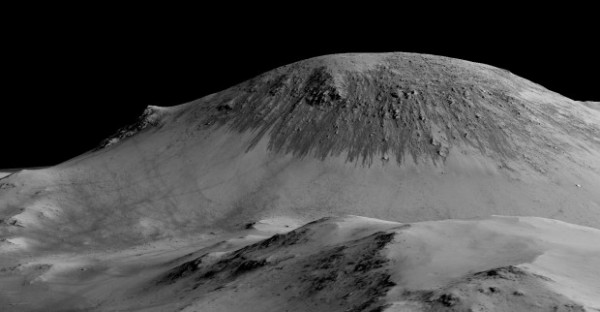 Of course, for us on Earth, water means life. Did life arise on Mars once, and can we find out? Is there life on Mars today? That’s why the discovery of water on Mars, so long suspected, is so fascinating. How likely is it that there is life on Mars today? The scientists pointed out that, although we haven’t been able to answer the question of whether life exists beyond Earth, the way to answering that question is surely following the water.

In other words, the presence of flowing water on Mars dramatically boosts the possibility that there is life on Mars today. Plus, scientists point out, now that we know water is flowing on Mars, we can be “more methodical” in the search for life.

And there’s more. The presence of this water on Mars may have implications for future human exploration on Mars in ways we can only imagine now.

The idea of water on Mars is not new. The planet has frozen water at its poles, and there’s also water in Mars’ thin atmosphere. Most recently, scientists said they believe tiny puddles form at night in places on Mars’ surface. There is also evidence that Mars had an ocean three billion years ago. Where did it go? Scientists say that “something happened” on Mars, possibly a major climate change.

Whatever happened caused Mars to lose most of its water, but clearly some water has remained.

So, at last … proof of flowing present-day water on Mars! Ojha said:

When most people talk about water on Mars, they’re usually talking about ancient water or frozen water. Now we know there’s more to the story. 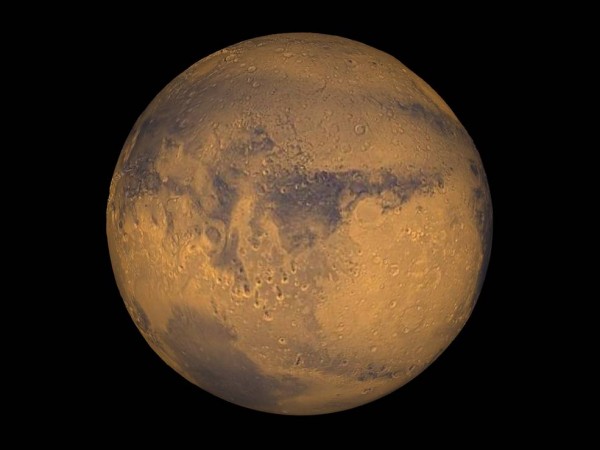 Bottom line: Scientists have found liquid water on Mars. The proof comes in the form of seasonal dark streaks on Mars’ surface, called recurring slope lineae by scientists. They are thought to be caused by briny water from an unknown source on Mars, flowing downhill.