This region on Mars may hold clues to earthly life

Evidence for deep-sea hydrothermal vents in the Eridania basin of southern Mars. Even if Mars never had life, this region may tell us about the type of environment where life on Earth may have begun. 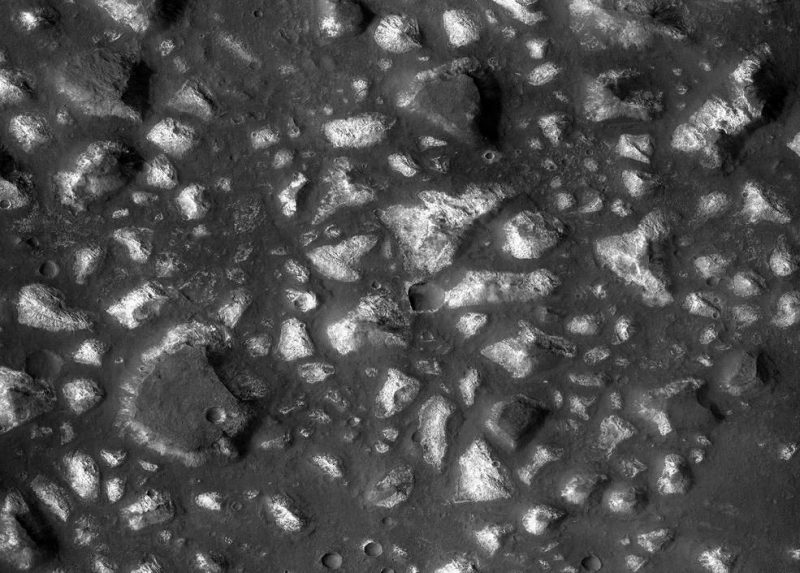 Possible floor of an ancient martian sea, in the Eridania region of southern Mars. The view spans about 12 miles (20 km). These fractured, dismembered blocks were surrounded and partially buried by younger volcanic deposits. The shape and texture of the bedrock layers, together with the mix of minerals identified from orbit, led researchers to identify this as the site of possible seafloor hydrothermal deposits. Image via Mars Reconnaissance Orbiter/NASA/JPL-Caltech/MSSS.

NASA said on October 6, 2017 that a region observed by its Mars Reconnaissance Orbiter – the Eridania region in the southern highlands of Mars – contains what’s being interpreted as evidence for ancient, martian sea-floor hydrothermal deposits. Such regions exist in Earth’s oceans today, and many forms of life thrive there on chemical energy extracted from rocks, without sunlight. Some scientists believe that life on Earth began at deep-sea hydrothermal vents. But the outer crust of Earth is always moving, and so there’s little direct geological evidence preserved from the time when life began. If indeed Mars’ Eridania region has ancient hydrothermal vents – preserved in Mars’ ancient rocks and dating from a time when earthly life was evolving – then Mars may offer clues to the origin of life on Earth.

Earth and Mars are next-door neighbors in our solar system, and they share history. Both formed from a disk-shaped cloud of gas and dust around the newly forming sun, four-and-a-half billion years ago. Scientists on Earth have evidence for life that is nearly 4 billion years old, but, on neighboring Mars, as yet no signs of life have been found. However, said space scientist Paul Niles of NASA’s Johnson Space Center in Houston:

Even if we never find evidence that there’s been life on Mars, this site can tell us about the type of environment where life may have begun on Earth. Volcanic activity combined with standing water provided conditions that were likely similar to conditions that existed on Earth at about the same time – when early life was evolving here. 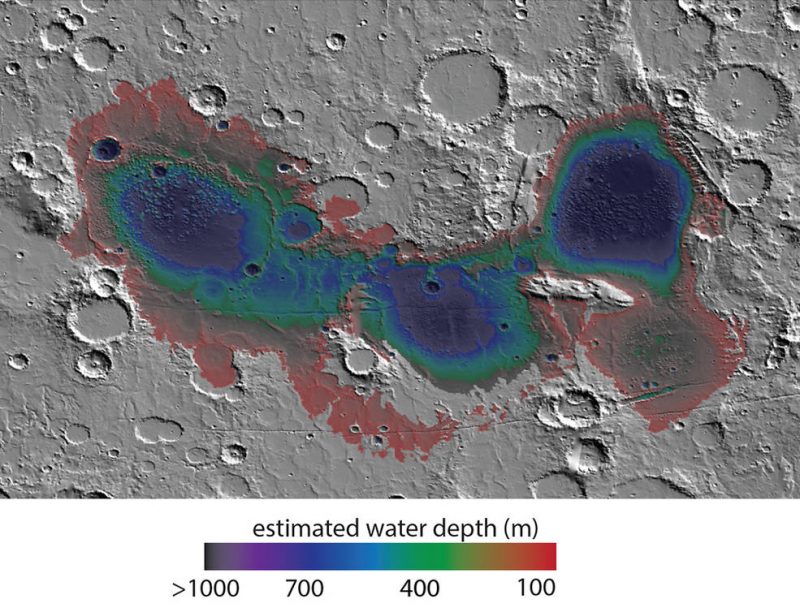 Estimated water depths in an ancient martian sea. This map covers an area about 530 miles (850 km) wide. A recent estimate of the total water volume of the ancient Eridania sea is about 50,000 cubic miles (210,000 cubic km), or about 9 times the total volume of North America’s Great Lakes. Image via NASA.

Mars’ Eridania basin lies in a region of Mars known to contain some of the Red Planet’s most ancient exposed crust. Instruments aboard the Mars Reconnaissance Orbiter – which arrived at Mars in 2006 – provided the data for identifying minerals in massive deposits in this region. Niles said:

This site gives us a compelling story for a deep, long-lived sea and a deep-sea hydrothermal environment.

It is evocative of the deep-sea hydrothermal environments on Earth, similar to environments where life might be found on other worlds [for example, Saturn’s moon Enceladus] – life that doesn’t need a nice atmosphere or temperate surface, but just rocks, heat and water.

There’s no standing water on Mars today, nor is there volcanic activity. The researchers are talking about the very early history of Mars and estimate an age of about 3.7 billion years for the martian deposits attributed to seafloor hydrothermal activity. But these scientists point out:

Undersea hydrothermal conditions on Earth at about that same time are a strong candidate for where and when life on Earth began.

The researchers estimate the ancient Eridania sea held about 50,000 cubic miles (210,000 cubic km) of water. That is as much as all other lakes and seas on ancient Mars combined and about nine times more than the combined volume of all of North America’s Great Lakes. The mix of minerals identified in this region on Mars – and the shape and texture of the thick bedrock layers – is what led the researchers to identifying possible seafloor hydrothermal deposits.

This new work adds to the diversity of types of wet environments for which evidence exists on Mars, including rivers, lakes, deltas, seas, hot springs, groundwater, and volcanic eruptions beneath ice. The report in Nature Communications says: 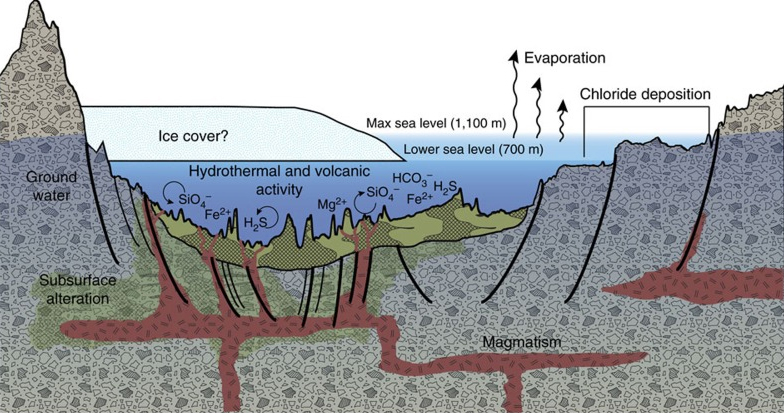 A geologic model for Eridania basin on ancient Mars. resulting from seafloor hydrothermal activity more than 3 billion years ago. The ground level depicted is an exaggerated topography of a transect about 280 miles (450 kilometers) long. Blue portions of the diagram depict water-depth estimates and the possibility of ice covering the ancient sea. Read more about this image, which was originally publishedhttps://www.nature.com/articles/ncomms15978?WT.feed_name=subjects_astrobiology in the journal Nature Communications.

Bottom line: The Eridania region of southern Mars may had had a large sea and seafloor hydrothermal activity more than 3 billion years ago. If so, it may offer clues to the origin of earthly life.