The car-sized rover is currently crossing a stretch of hard, rocky ground like that which previously dented and punctured its aluminum wheels. 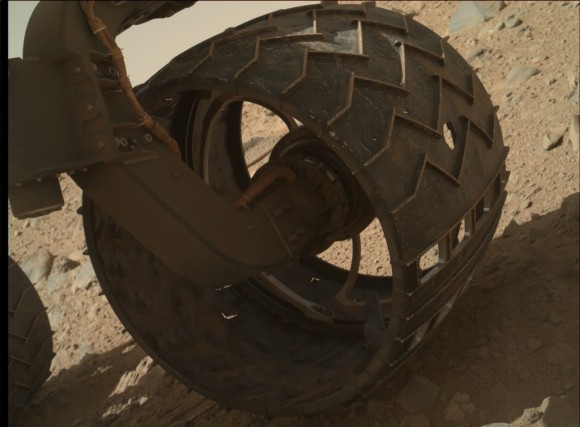 View larger. | A puncture (center right) in one of the Mars rover Curiosity’s wheels. (The sequence of cutouts at lower right are deliberate and imprint ‘JPL’ in Morse code as the wheels roll across the Martian surface.) Image via NASA/JPL-CALTECH/MSSS / Nature.

Since it landed after its 7 minutes of terror on August 5-6, 2012, NASA’s Mars rover Curiosity has covered about 5 miles (8.5 km) of ground on the desert world Mars. Now, according to a post today (July 17, 2014) in Nature, the Curiosity rover is facing some of the most dangerous terrain it has yet encountered. Alexandra Witze at Nature wrote:

The car-sized rover is currently crossing a stretch of hard, rocky ground like that which previously dented and punctured its aluminum wheels. Winds at Gale Crater, Curiosity’s landing site, have whittled and sharpened rocks into piercing points unlike that seen by NASA’s three earlier Mars rovers. Curiosity needs to travel about 200 meters [about 220 yards] of this sharp ‘caprock’ before it can descend into a sandy, more wheel-friendly depression dubbed Hidden Valley.

‘This is awful stuff,” says John Grotzinger, the mission’s chief scientist and a geologist at the California Institute of Technology in Pasadena. He spoke on 16 July in a public lecture associated with a week-long Mars conference on the Caltech campus.

Grotzinger and his team of scientists and engineers have spent much of the spring and summer figuring out a way to get Curiosity closer to its ultimate target — a 5-kilometer-high mountain known as Mount Sharp — while not destroying its wheels along the way.

Read more about Curiosity’s most recent challenge at Nature