Mars and its atmosphere, seen by MOM spacecraft

Two early images from India’s MOM spacecraft. One shows an edge of Mars, with the planet’s tenuous atmosphere above. The other shows the whole planet. Beautiful! 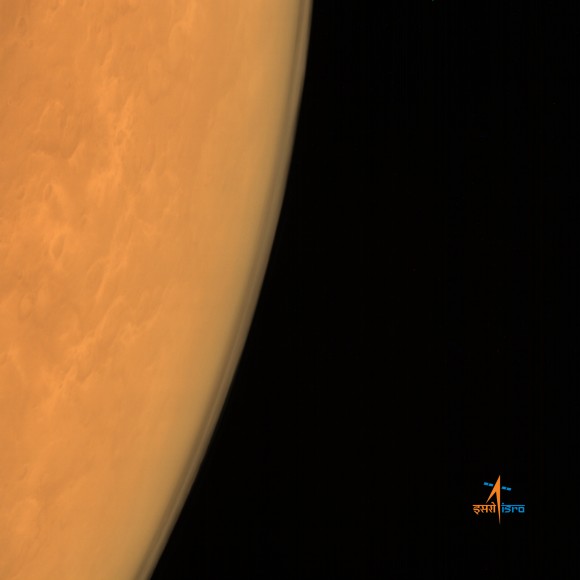 India’s Mars Orbiter Mission (MOM) captured this image of the “limb” (edge) of Mars with its Mars Color Camera from an altitude of 8,449 kilometers soon after achieving orbit on September 23-24, 2014. Image via the Indian Space Research Organization.

The world applauded India last week as its maiden interplanetary spacecraft – the Mars Orbiter Mission, or MOM – achieved orbit around the Red Planet. Here are some of the first images transmitted from MOM. At top, a gorgeous shot of the limb, or edge, of Mars with the tenuous Martian atmosphere silhouetted against the blackness of space. The Indian Space Research Organization (ISRO), India’s space agency, released this image on September 25, 2014, about a day after MOM arrived.

ISRO announced that MOM successfully entered into an orbit around planet Mars on September 24, 2014 at 7:30 a.m. India Standard Time (02:00 UTC; 20:00 EDT in the U.S. on September 23). MOM carries five instrument suite whose mission is to study the surface and atmosphere of Mars with a particular emphasis on measuring the methane in the Martian atmosphere: a key indicator of microbial life. 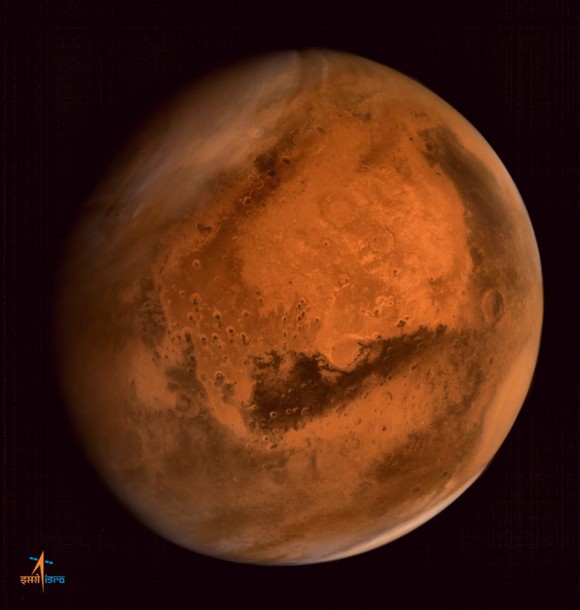 Mars from 74,500 kilometers / 46,265 miles. A dust storm is visible in the northern hemisphere. The MOM mission captured this image on September 28, 2914. Image via the Indian Space Research Organization.

Above is another beauty from MOM, acquired on September 28, 2014.

The Schiaparelli Basin (460 kilometers / 286 miles wide) is visible just below right, of dead center. To the left is the Meridiani Terra with Meridiani Planum where NASA’s Opportunity rover is still operating almost flawlessly after 10 years on Mars.

Oxia Palus is clearly visible as is Chryse Planitia where the Viking 1 lander touched down in July 1976 and also the Ares Vallis, where the Mars Pathfinder successfully landed in July 1997.

Syrtis Major is visible towards the right limb.

Bottom line: Here are some early images from India’s MOM spacecraft. One shows the limb of Mars, with its tenuous atmosphere above. The other shows the whole planet, with a dust storm visible in the planet’s northern hemisphere. Beautiful!