Next Mars rover will have 23 eyes

Cameras have come a long way since the first Mars rover in 1997. The newest Mars rover from NASA – on the Mars 2020 mission – will have a wider field of view, plus more color and 3-D imaging. 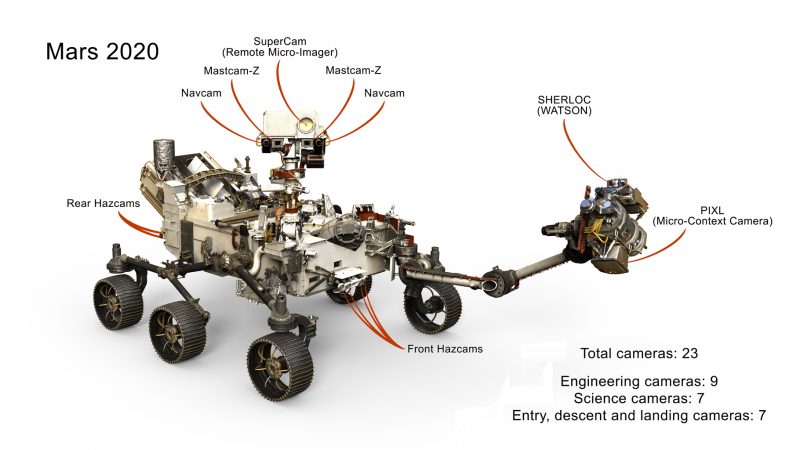 This image presents a selection of the 23 cameras on NASA’s 2020 Mars rover. Many are improved versions of the cameras on the Curiosity rover, with a few new additions as well. Image via NASA.

Mars hasn’t been spectacular in our sky in 2017, but it’ll have a memorable opposition in 2018. Then Mars will be especially close to us, and when many will be speaking of this neighboring red world, shining so brightly in our skies. The 2020 opposition of Mars will be excellent as well, which is why NASA choose 2020 as the year to send a new rover to Mars. Because Earth and Mars will come particularly close that year, the Mars 2020 mission will need relatively less power to travel to Mars, thus lowering mission costs and risks. Various details of the mission have already been published, and this week – October 31, 2017 – NASA announced that the new Mars 2020 rover will have 23 “eyes,” that is, 23 cameras.

That’s in contrast to five cameras for NASA’s Mars Pathfinder mission in 1997, whose rover, Sojourner, was the first to creep across Mars’ surface. And it’s more cameras than Curiosity’s 17; Curiosity is the most recent Mars rover, and the Mars 2020 mission is building on its technologies.

Camera technology has, clearly, taken a quantum leap since Sojourner in 1997.

… create sweeping panoramas, reveal obstacles, study the atmosphere, and assist science instruments. They will provide dramatic views during the rover’s descent to Mars and be the first to capture images of a parachute as it opens on another planet. There will even be a camera inside the rover’s body, which will study samples as they’re stored and left on the surface for collection by a future mission.

The cameras on 2020 will include more color and 3-D imaging than on Curiosity.

Some camera lenses will also have a wider field of view. That’s critical for the 2020 mission, which will try to maximize the time spent doing science and collecting samples. Colin McKinney of JPL, product delivery manager for the new engineering cameras, said:

Our previous Navcams would snap multiple pictures and stitch them together. With the wider field of view, we get the same perspective in one shot.

This diagram by Roy L. Bishop shows why 2020 is a good time to send a spacecraft to Mars. It shows the distance between Earth and Mars at Mars once-every-2-year oppositions, when Earth is passing more or less between Mars and the sun. Mars’ distance at opposition varies on a 15-year cycle. Image copyright Royal Astronomical Society of Canada. Used with permission. Visit the RASC estore to purchase the Observers Handbook, a necessary tool for all skywatchers. 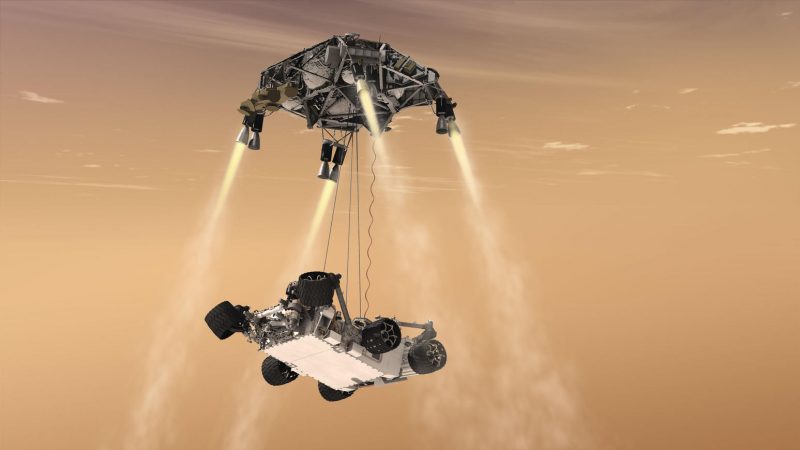 The Mars 2020 spacecraft will follow an entry, descent, landing process similar to that used in landing the Mars rover Curiosity in 2012, but with major technological advancements. Read more about Curiosity’s landing, which space engineers jokingly described as 7 minutes of terror.

The Mars 2020 spacecraft entry, descent, landing process will have some flexibility that Curiosity did not have. 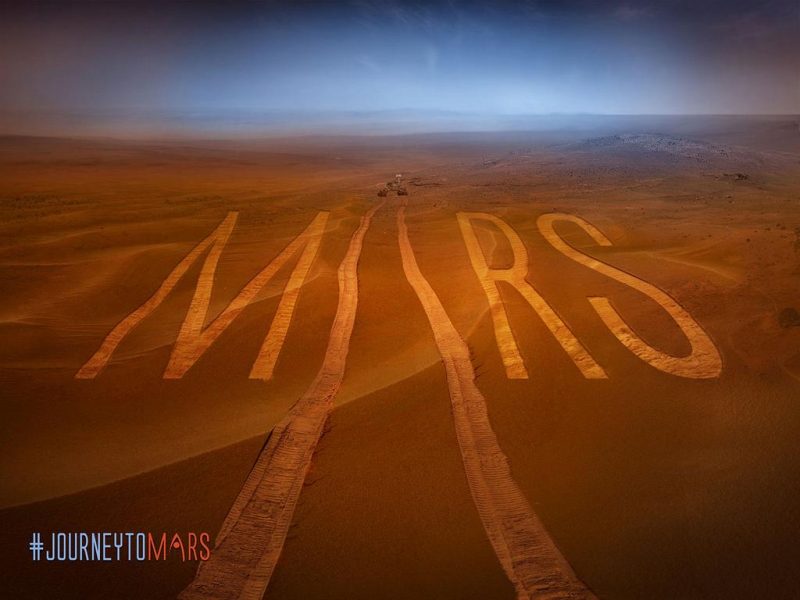 Artist’s concept of rovers on Mars, via NASA.