A tiny helicopter for Mars 2020

“After the Wright Brothers proved 117 years ago that powered, sustained, and controlled flight was possible here on Earth, another group of American pioneers may prove the same can be done on another world.”

Reprinted with permission from AmericaSpace

Excitement has been building for NASA’s next rover mission to Mars, scheduled to launch sometime in 2020. Although it looks a lot like the current Curiosity rover, its mission will be to search directly for possible evidence of past life. Curiosity, on the other hand, is studying the ancient habitability of Gale Crater on Mars, which we now know used to hold a lake or series of lakes, focusing more on geology than biology.

And now the upcoming 2020 mission just got even better – NASA has approved the inclusion of a tiny drone-like helicopter to accompany the rover!

This is something never done before, and assuming it’s successful, will be the first time that Mars has been robotically explored by something other than an orbiter, lander or rover. 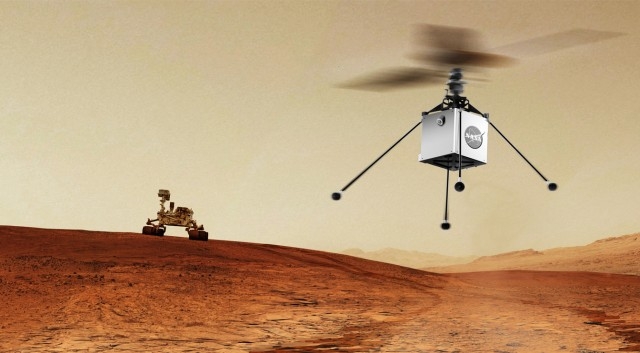 Artist’s concept of the Mars Helicopter, which will be sent to Mars along with the 2020 rover. Image via NASA/JPL-Caltech/AmericaSpace.

The Mars Helicopter will be a small, drone-like autonomous rotorcraft, designed specifically for Mars’ very thin atmosphere; it will provide a unique and exciting new way to see the Martian landscape as never before – a bird’s-eye view, if you will.

NASA has a proud history of firsts. The idea of a helicopter flying the skies of another planet is thrilling. The Mars Helicopter holds much promise for our future science, discovery, and exploration missions to Mars.

Having a helicopter would be useful in scouting out sites for further investigation by the rover. Being up in the air is a definite advantage. You can get a better overall view than from the ground or even from orbit.

The Mars Helicopter will be a first test of this kind of technology. Weighing under four pounds (1.8 kilograms), and with a body the size of a softball, the concept has already gone through four years of design, testing and redesign. Operating in Mars’ thin atmosphere isn’t as easy as on Earth, so the twin, counter-rotating blades will need to spin at almost 3,000 rpm, 10 times faster than a conventional helicopter. On the Martian surface, the atmosphere is equivalent to an altitude of 100,000 feet (30,000 meters) on Earth, so the helicopter needs to be able to fly in those conditions. 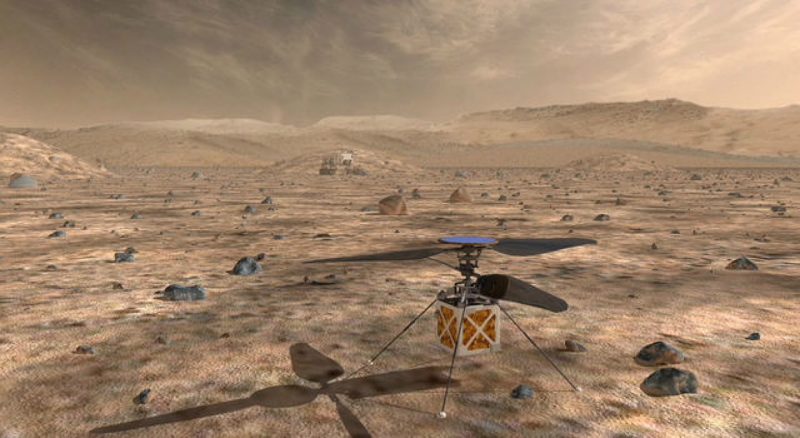 Artist’s concept of the helicopter on Mars’ surface. After deployment, it’ll make a short first test flight, and then longer flights to different locations on Mars. Image via NASA/JPL-Caltech/AmericaSpace.

To make it fly at that low atmospheric density, we had to scrutinize everything, make it as light as possible while being as strong and as powerful as it can possibly be.

The Mars Helicopter also includes solar cells to charge its lithium-ion batteries and a heater to keep it warm. The 2020 mission provides a perfect opportunity to test this first attempt at Mars aviation. Thomas Zurbuchen, Associate Administrator for NASA’s Science Mission Directorate, said:

Exploring the red planet with NASA’s Mars Helicopter exemplifies a successful marriage of science and technology innovation and is a unique opportunity to advance Mars exploration for the future. After the Wright Brothers proved 117 years ago that powered, sustained, and controlled flight was possible here on Earth, another group of American pioneers may prove the same can be done on another world.

NASA will conduct a 30-day flight test campaign of the helicopter. For the first flight, it will climb to about 10 feet (3 meters), and then hover for about 30 seconds. If all goes well, it will take gradually longer flights, up to a few hundred meters. Zurbuchen said:

The ability to see clearly what lies beyond the next hill is crucial for future explorers. We already have great views of Mars from the surface as well as from orbit. With the added dimension of a bird’s-eye view from a “marscopter,” we can only imagine what future missions will achieve.

The 2020 rover itself will be the most sophisticated ever sent to Mars so far. While other rovers have focused on geology and habitability, this one is designed to look directly for evidence of past microbial life on the red planet, with updated instruments, and will be the first life-focused mission since the Viking landers in the 1970s. It will also take rock and soil samples which will be preserved in small tubes, to be sent back to Earth at a later date and test technologies which could be used for future human missions.

The rover will launch in 2020 and land in February 2021. Meanwhile, NASA’s newest Mars mission, the InSight lander, was launched on May 5 and will land later this year. InSight will stay in one place, however, using a wide range of instruments to study the composition of the interior of Mars, to help scientists learn how the planet formed and evolved. 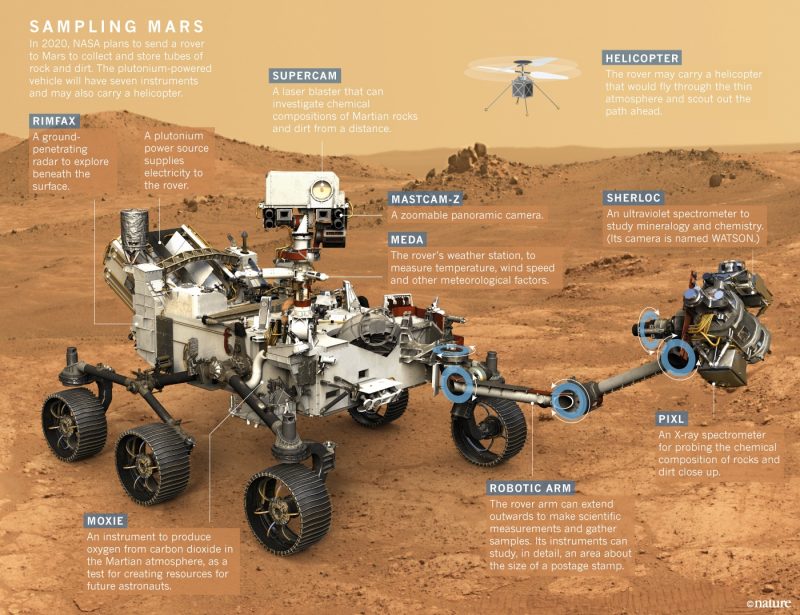 View larger. | Mars 2020 rover is similar in design to the Curiosity rover, but will focus on searching for evidence of past microbial life. The helicopter, now approved, will serve as a scout. Image via NASA/JPL-Caltech/Nature/AmericaSpace.

Bottom line: Mars’ atmosphere is thin. In order to stay aloft, the planned softball-sized Mars Helicopter – which will accompany the Mars 2020 mission – will have twin, counter-rotating blades that’ll bite into Mars’ thin air at about 10 times the rate of a helicopter on Earth.

Via NASA JPL and AmericaSpace