March 20 eclipse and the Saros

There are currently 40 different Saros series in progress, each with its own assigned number. The total solar eclipse of March 20, 2015 belongs to Saros 120.

The total solar eclipse of March 20, 2015 belongs to a family of eclipses known as Saros 120. A Saros series is composed of a group of eclipses in which each eclipse is separated from the next (or previous) eclipse by 6,585.3 days. This equals 18 years 10 days 8 hours (or 18 years 11 days 8 hours, depending on the number of leap years over this interval).

The Saros period is special because any two eclipses separated by one Saros are very similar to each other. The moon is nearly at the same position with respect to its node (the point where the moon’s orbit crosses Earth’s orbit) and is also at almost the same distance from Earth. Not only that, the eclipse occurs at virtually the same time of year.

These coincidences arise because three of the moon’s orbital periods repeat after one Saros period of 18 years 10.3 days. The three periods are:

If you work out the math, you find that:

The biggest drawback of the Saros period is that it’s not equal to a whole number of days. The extra 8 hours means that Earth rotates an additional 1/3 of a day so subsequent eclipses are visible from different parts of the globe. For solar eclipses in a Saros series, this means that each successive eclipse path shifts about 120 degrees westward.

The paths of solar eclipse of Saros 136 show a westward shift of about 120 degrees with each succeeding eclipse. The northward shift is due to the shift in the Moon’s position with respect to its node. Drawing by Fred Espenak. Used with permission.

Of course, the agreement between the moon’s three periods isn’t perfect over one Saros period. Consequently, a Saros series of eclipses has a finite lifetime lasting from 12 to 15 centuries. Each series begins with a small partial eclipse near one of the poles. Each partial eclipse grows larger as the moon passes progressively closer to the node until its umbral shadow finally crosses Earth producing either a total or annular eclipse. After 50 or 60 of these central eclipses, the Saros series ends with a final group of partial eclipses at the opposite pole.

There are currently 40 different Saros series in progress, each one with its own assigned number. Some of them are relatively young like Saros 145 that includes the next American total solar eclipse on August 21, 2017. Others are old like Saros 120.

This month’s total solar eclipse is the 61st eclipse of Saros 120. The family began with a series of 7 partial eclipses starting on May 27, 933. The first central eclipse was annular and took place on August 11, 1059. After 24 more annular and 4 hybrid eclipses, the series changed to total on June 20, 1582. Subsequent members of Saros 120 were all total eclipses with maximum durations hovering around 2 minutes. One eclipse in the series occurred on Jan. 24, 1925 and passed through New Your City. Another eclipse on February 26, 1979 was the most recent total solar eclipse visible from the continental United States. 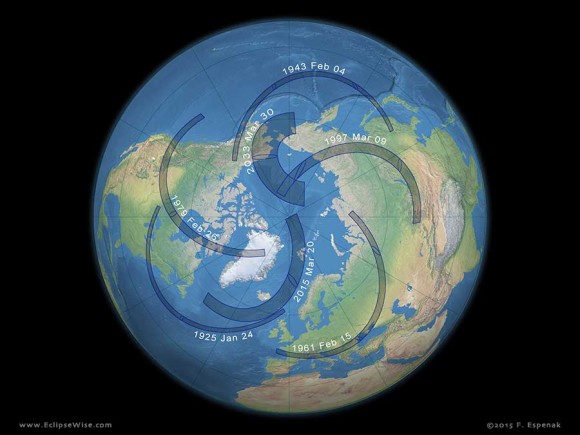 The paths of the final 7 total solar eclipse of Saros 120 show both the westward and northern shift of the eclipse paths with each succeeding eclipse. The northward shift is due to the shift in the Moon’s position with respect to its node. ©2015 by Fred Espenak. Used with permission.

For more information on the Saros and eclipses, see:
Periodicity of Solar Eclipses.

The total solar eclipse of March 20, 2015 is visible from within a wide corridor that traverses the North Atlantic. A partial eclipse is visible from Europe, North Africa and western Asia. ©2014 by Fred Espenak. Used with permission.

Bottom line: Perhaps you’ve heard of the Saros cycle of eclipses. There are currently 40 different Saros series in progress, each with its own assigned number. The total solar eclipse of March 20, 2015 belongs to Saros 120. Eclipse master Fred Espenak explains more.

Watch for the legendary green flash 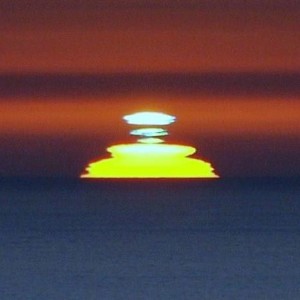