Mapping the weather on an extreme exoplanet

Scientists using the Hubble Space Telescope have completed the first map of temperature and water vapor on a “hot Jupiter,” an exoplanet called WASP 43b. 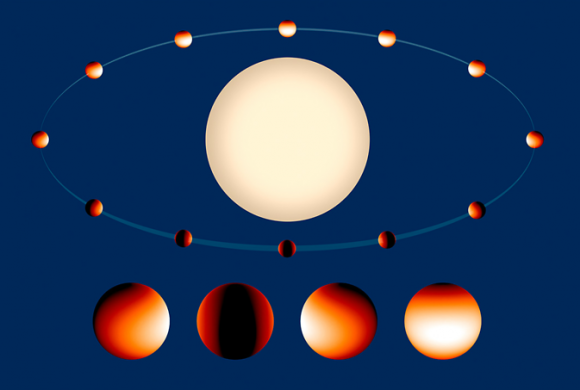 Ever wonder what the weather might be like on an alien world? If the world is WASP-43b – approximately 260 light years away, in the direction of the southern constellation Sextans – the answer is hot nights, and even hotter days. Scientists using the Hubble Space Telescope have now mapped the temperature and water vapor in this exoplanet’s atmosphere. They say their work has resulted in the most detailed map of its kind. The map and new results about this distant world’s weather are presented in two new papers. One is published online today (October 9, 2014) in Science Express, and the other was published on September 12 in The Astrophysical Journal Letters.

This planet has different sides for day and night because it is tidally locked to its star. That is – much as our moon keeps a single face toward Earth – WASP 43b keeps a single face toward its star. The observations show that the exoplanet has winds that howl at the speed of sound from a day side that is hot enough to melt iron — where temperatures soar to nearly 3,000 degrees Fahrenheit (1,500 Celsius) — to the pitch-black night side that sees temperatures plunge to a relatively cool 1,000 degrees F (500 degrees C).

Timelapse video WASP 43b over one rotation

WASP-43b is about the size of Jupiter, but it has twice as much mass as our solar system’s largest planet. Its orbit brings it much closer to its parent star than any planet in our solar system, and thus WASP 43b has one of the shortest years ever measured for an exoplanet of its size — lasting just 19 hours.

Astronomers working on the two companion studies say their work is the first of its kind in terms of providing a two-dimensional map of the planet’s thermal structure.

They say the maps can be used to constrain circulation models that predict how heat is transported from an exoplanet’s hot day side to its cooler – but still blazing – night side.

They say their findings have ramifications for the understanding of atmospheric dynamics and the formation of giant planets like Jupiter and that their measurements have opened the door for “a new kind of comparative planetology.”

Bottom line: Scientists using the Hubble Space Telescope have completed the first map of temperature and water vapor on a “hot Jupiter,” an exoplanet called WASP 43b.