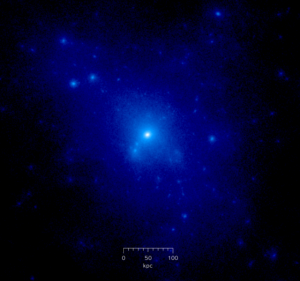 Projected density of a dark matter halo from a distant galaxy. The visible part of the galaxy (not shown in the image) would lie at the dense center of the halo. Satellite galaxies each would have their own subhalos, visible as a region of high dark matter density in the image.

Thank you! Your submission has been received!
Oops! Something went wrong while submitting the form.
END_OF_DOCUMENT_TOKEN_TO_BE_REPLACED