The sun might be headed for a rest period, according to scientists at the National Solar Observatory and the Air Force Research Laboratory.

The sun might be headed for a rest period, according to according to a June 14 announcement by scientists at the National Solar Observatory (NSO) and the Air Force Research Laboratory (AFRL). 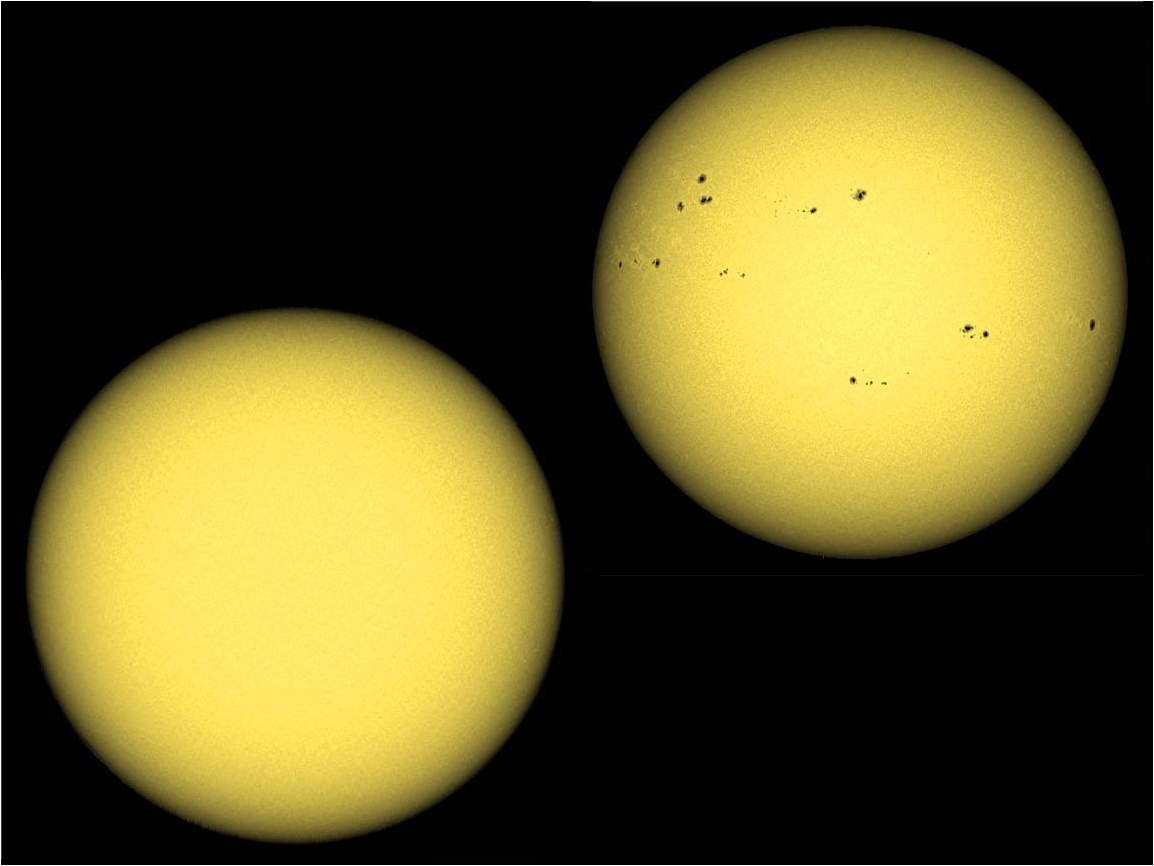 Research results, at the 2011 annual meeting of the Solar Physics Division of the American Astronomical Society at New Mexico State University in Las Cruces, suggest familiar sunspot cycle might be shutting down for a while.

Solar activity, including sunspot numbers, rises and falls about every 11 years, which is half of the Sun’s 22-year magnetic interval since the Sun’s magnetic poles reverse with each cycle. 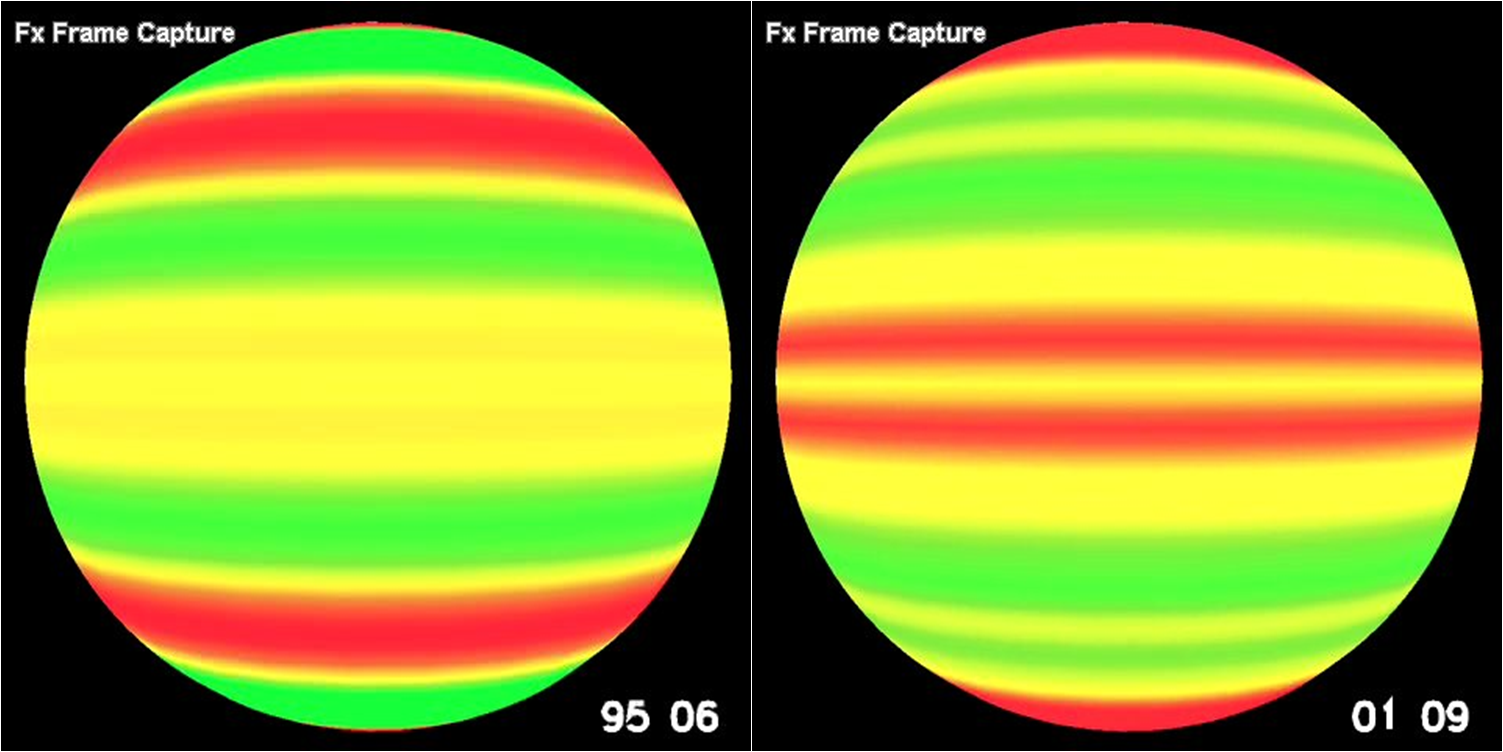 Mobile jet streams in the Sun migrate from the poles toward the equator as the solar cycle progresses. At left (solar minimum) the red jet streams are located near the poles. At right (solar maximum) they have migrated close to the equator. The jet streams are associated with the locations where sunspots emerge during the solar cycle, and are thought to play an important role in generating the Sun’s magnetic field. Image credit: National Solar Observatory, Air Force Research Laboratory

Frank Hill, associate director of the NSO’s Solar Synoptic Network is the lead author on one of three papers on these results being presented at the meeting. Using data from the Global Oscillation Network Group (GONG) of six observing stations around the world, the team translates surface pulsations caused by sound reverberating through the sun into models of the internal structure. One of their discoveries is an east-west zonal wind flow inside the sun, called the torsional oscillation, which starts at mid-latitudes and migrates towards the equator. The latitude of this wind stream matches the new spot formation in each cycle, and successfully predicted the late onset of the current Cycle 24. Hill explained:

In the second paper, Matt Penn and William Livingston see a long-term weakening trend in the strength of sunspots. They predict that by Cycle 25 magnetic fields erupting on the Sun will be so weak that few if any sunspots will be formed. Spots are formed when intense magnetic flux tubes erupt from the interior and keep cooled gas from circulating back to the interior. For typical sunspots this magnetism has a strength of 2,500 to 3,500 gauss (Earth’s magnetic field is less than 1 gauss at the surface); the field must reach at least 1,500 gauss to form a dark spot.

Using more than 13 years of sunspot data collected at the McMath-Pierce Telescope at Kitt Peak in Arizona, Penn and Livingston observed that the average field strength declined about 50 gauss per year during Cycle 23 and now in Cycle 24. They also observed that spot temperatures have risen exactly as expected for such changes in the magnetic field. If the trend continues, they say, the field strength will drop below the 1,500 gauss threshold and spots will largely disappear as the magnetic field is no longer strong enough to overcome convective forces on the solar surface.

In the third study, Richard Altrock, manager of the Air Force’s coronal research program at NSO’s Sunspot, NM, facilities, has observed a slowing of the “rush to the poles,” the rapid poleward march of magnetic activity observed in the Sun’s faint corona. Altrock used four decades of observations with NSO’s 40-cm (16-inch) coronagraphic telescope at Sunspot.

In a well-known pattern, new solar activity emerges first at about 70 degrees latitude at the start of a cycle, then towards the equator as the cycle ages. At the same time, the new magnetic fields push remnants of the older cycle as far as 85 degrees poleward. Altrock said:

In cycles 21 through 23, solar maximum occurred when this rush appeared at an average latitude of 76 degrees. Cycle 24 started out late and slow and may not be strong enough to create a rush to the poles, indicating we’ll see a very weak solar maximum in 2013, if at all. If the rush to the poles fails to complete, this creates a tremendous dilemma for the theorists, as it would mean that Cycle 23’s magnetic field will not completely disappear from the polar regions (the rush to the poles accomplishes this feat). No one knows what the sun will do in that case.

Speaking of the results of the three studies, NSO’s Frank Hill said:

If we are right, this could be the last solar maximum we’ll see for a few decades. That would affect everything from space exploration to Earth’s climate.