A stack of four identical spacecraft will study Earth’s magnetosphere – the comet-shaped magnetic shield that protects us from “space weather.” Watch the launch. 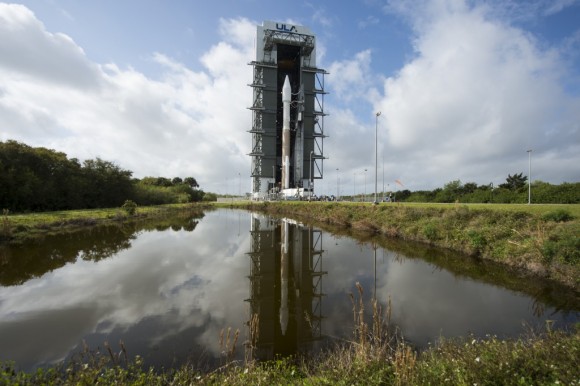 The quartet of identical satellites will examine Earth’s magnetosphere, which helps protect the planet from “space weather” – a mixture of radiation and high-energy particles that bombard Earth from the sun and other sources.  It’ll be used to study the phenomenon of magnetic reconnection. More about that below. 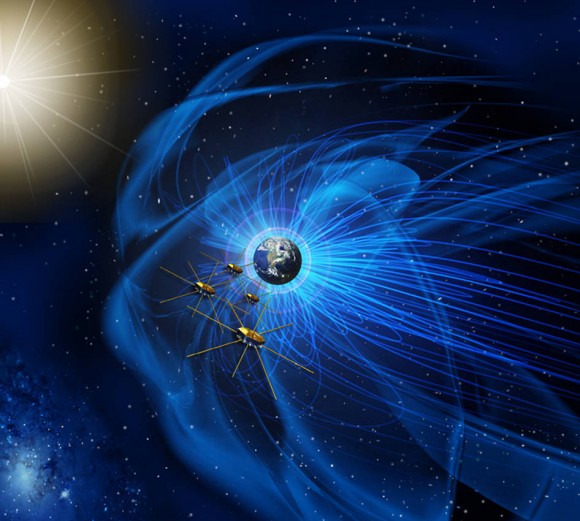 Artist’s concept of the MMS satellites that will fly in a tight formation and provide the first three-dimensional view of magnetic reconnection. Image credit: NASA

MMS will use the Earth’s magnetosphere – the comet-shaped magnetic shield that protects our planet from solar and cosmic radiation – as a laboratory to study the microphysics of magnetic reconnection. That is a little-understood phenomenon – yet a fundamental process that occurs throughout the universe – when magnetic fields connect and disconnect explosively, releasing energy and accelerating particles up to nearly the speed of light.

Each of the four satellites, flying together as a tightly coordinated, pyramid-shaped fleet through the magnetosphere, will carry identical instruments and will thus be able to gather a multi-dimensional view of the reconnection processes that has eluded previous studies. This is necessary because the area where magnetic reconnection occurs – the so-called “diffusion region” – passes by the satellites in just a tenth of a second. Together, the four satellites will provide extremely precise time resolution of the process. 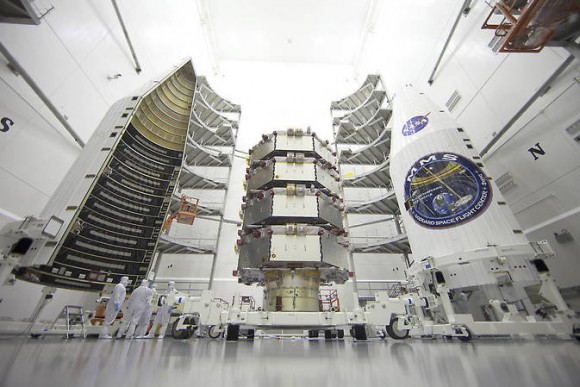 NASA’s Magnetospheric Multiscale (MMS) observatories are processed for launch in a clean room at the Astrotech Space Operations facility in Titusville, Florida. MMS consists of four identical spacecraft that will provide the first three-dimensional views of a process known as magnetic reconnection.
Image credit: NASA/Ben Smegelsky

Here’s NASA’s movie about MMS and the phenomenon of magnetic reconnection, which occurs near Earth, on the sun, in other stars and in the vicinity of black holes and neutron stars. 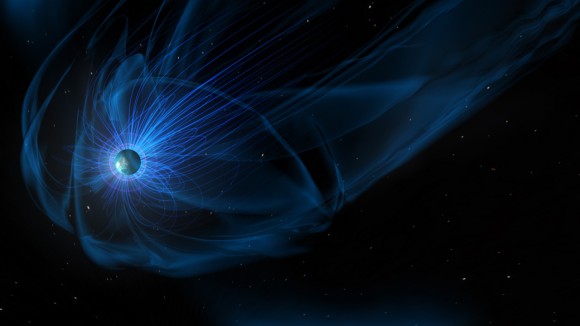 A giant magnetic bubble, called the magnetosphere, surrounds Earth. NASA’s Magnetospheric Multiscale, or MMS, mission, studies how a phenomenon called magnetic reconnection allows energy and particles from the sun to funnel inside the magnetosphere, into near-Earth space. Image via NASA/Goddard/Conceptual Image Lab