For decades, astronomers have been talking about of galaxies with supermassive black holes at their cores. Now they say they’ve clearly confirmed a black hole’s encircling, dusty, spinning disk of gas. 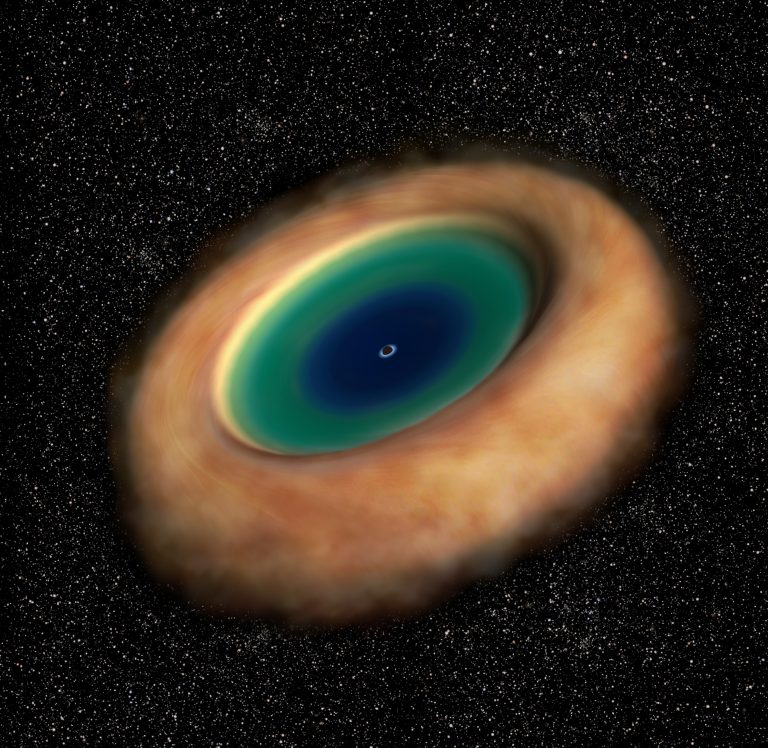 Artist’s concept of the dusty gaseous torus around the active supermassive black hole in the distant galaxy M77. Want the real images? See below. Artist’s concept via ALMA (ESO/NAOJ/NRAO).

Astronomers have used the ALMA telescope in northern Chile to image a rotating dusty gas torus around an active supermassive black hole in a distant galaxy. The galaxy is M77, a relatively nearby barred spiral, located some 47 million light-years away in the direction of the southern constellation Cetus the Whale. The astronomers were able to view a compact gaseous structure with a radius of 20 light-years at this galaxy’s core. And, they found, the compact structure is spinning around the black hole, as theories have suggested it should. Astronomers have been talking for decades about supermassive black holes – with compact, gaseous disks around them – at the cores of galaxies, but, according to ALMA:

… this is the first time one has been confirmed so clearly.

Masatoshi Imanishi of the National Astronomical Observatory of Japan led this research, which was published February 1, 2018, in peer-reviewed Astrophysical Journal Letters. 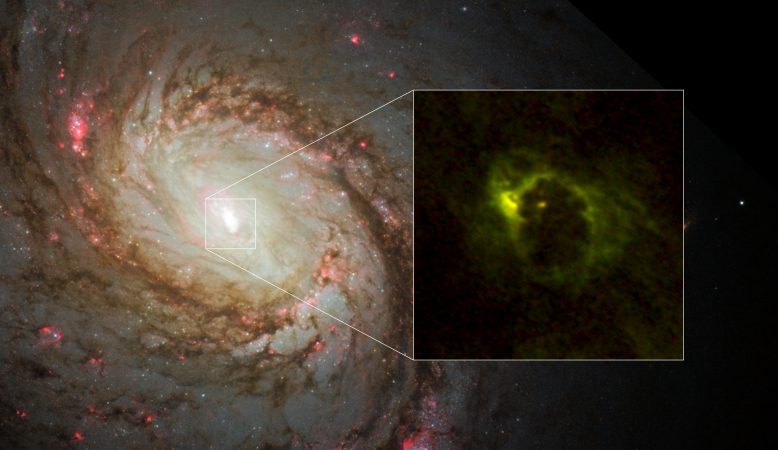 The Hubble Space Telescope imaged the central region of the spiral galaxy M77. ALMA revealed the distribution of gas in the very center of the galaxy (inset). ALMA imaged a horseshoe-like structure with a radius of 700 light-years. It also imaged a central compact component with a radius of 20 light-years: the gaseous torus around the black hole. Red indicates emission from formyl ions (HCO+) and green indicates hydrogen cyanide emission. Image via ALMA (ESO/NAOJ/NRAO), Imanishi et al., NASA/ESA Hubble Space Telescope and A. van der Hoeven. 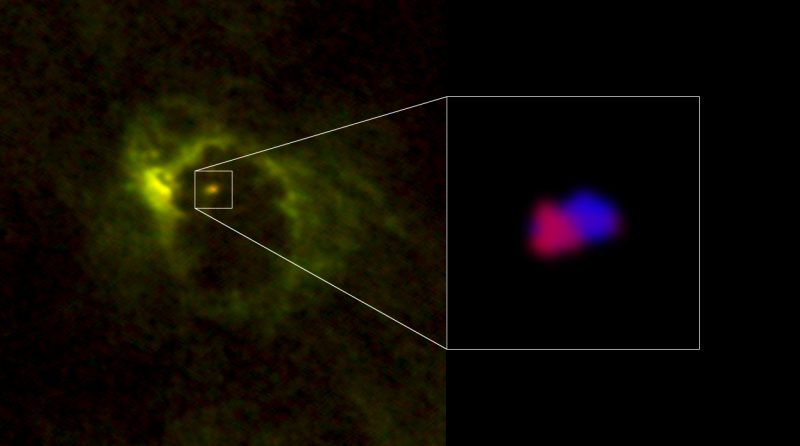 Motion of gas around the supermassive black hole in the center of M77. The gas moving toward us is shown in blue and that moving away from us is in red. The rotation of the gas is centered around the black hole. Image via ALMA (ESO/NAOJ/NRAO), Imanishi et al.

This sounds reasonable at first, but host galaxies are 10 billion times bigger than the central black holes; it should be difficult for two objects of such vastly different scales to directly affect each other. So how could such a relation develop?

A team of astronomers used the ALMA telescope to peer toward M77, aiming to solve the puzzle. ALMA said:

The central region of M77 is an “active galactic nucleus,” or AGN, which means that matter is vigorously falling toward the central supermassive black hole and emitting intense light. AGNs can strongly affect the surrounding environment, therefore they are important objects for solving the mystery of the co-evolution of galaxies and black holes.

To interpret various observational features of AGNs, astronomers have assumed rotating donut-like structures of dusty gas around active supermassive black holes. This is called the unified model of AGNs.

However, the dusty gaseous donut is very tiny in appearance. With the high resolution of ALMA, now we can directly see the structure.

As typically happens, getting to the heart of one mystery spawned another mystery. These astronomers said the distribution of gas around the supermassive black hole in M77 is more complicated than the unified model suggests. They said:

The torus seems to have an asymmetry and the rotation is not just following the gravity of the black hole but also contains highly random motion. These facts could indicate the AGN had a violent history, possibly including a merger with a small galaxy.

Nevertheless, the identification of the rotating torus is an important step.

Bottom line: Astronomers have gotten what they said is their clearest view yet of the dusty disk or donut surrounding a supermassive black hole. It is at the core of the spiral galaxy M77, some 47 million light-years away.