Looking for meteors? Try to get away from city lights

City lights drown all but the brightest stars, planets, and fireballs. But there’s still some dark out there, as this satellite view of the U.S at night shows. 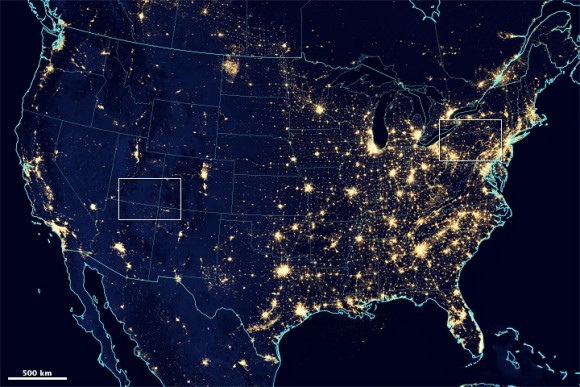 The inset boxes show the general location of two International Dark Sky Association (IDA) ‘gold-tier’ parks —the highest dark sky designation — where the full array of visible sky phenomena can be seen with the unaided eye. Image via NASA

About 80 percent of people in the United States live in urban areas. In these areas, the glow of artificial light sources blot out the night sky. The annual Leonid meteor shower will reach its peak early Tuesday morning (November 18, 2014). Will you see any meteors? Conditions are optimum this year. The moon is in a waning crescent phase and mostly out of the way. The brightest planet, Jupiter, is near the Leonids’ radiant point. The sky is cooperating! But, as much fun as it is to see a meteor zing by in your suburban backyard – or even from an urban balcony – we all know that city lights drown all but the brightest stars, planets, and fireballs.

Everything you need to know: Leonid meteor shower

For the best viewing of tonight’s Leonid meteor shower, you need to find an area well away from city or street lights. State parks and national parks can be great, if you can find one with an open view of the sky. Try an online search for the name of your area, plus “state park national park.”

A great place to see the night sky is a dark sky park. In the U.S. and around the world, parks are achieving certification from the International Dark Sky Association (IDA), an organization that calls attention to light pollution. Click here for more information and to see a list of dark sky parks.

The image of the United States at the top of this page is a nighttime composite assembled from data acquired in 2012 by Suomi NPP satellite. The inset boxes show the general location of two IDA gold-tier parks — the highest dark sky designation — where the full array of visible sky phenomena can be seen with the unaided eye. Christopher Kyba is a postdoctoral scholar at the German Research Center for Geoscience and a member of the IDA board of directors. He said:

It’s important to point out that these places aren’t “dark.” They are naturally lit by celestial sources. You can walk in a field in starlight, and through the woods in moonlight.