Looking for ETs who see us 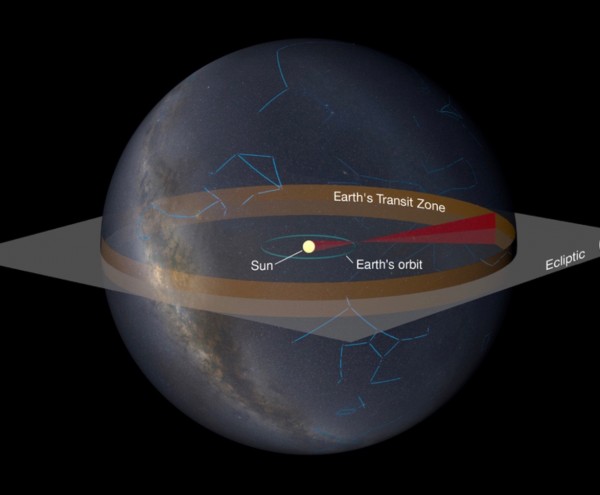 Artist’s concept of the “transit zone,” in which distant observers could see the Earth pass in front of the sun. This zone is just an extension of the ecliptic, or plane of Earth’s orbit around the sun. Image via Axel Quetz (MPIA) / Axel Mellinger, Central Michigan University.

Researchers just announced a new idea – one that seems supremely logical – in the ongoing search for advanced extraterrestrial life. It’s the idea that we should search for advanced aliens that might already be aware of us, focusing on that part of the sky in which potential distant observers would be able to notice a yearly transit of Earth in front of the sun.

A transit of Earth is like a mini-eclipse. To distant observer who could observe Earth transits, Earth would not, of course, cover the sun completely, but it would cause a tiny drop in the sun’s light as it passed in front of our star. In a statement from the Max Planck Institute this week (March 1, 2016), astronomers said:

This so-called transit can be measurable, depending on the size on the planet and the sensitivity of the instrument. In fact, the majority of the exoplanets known to us today have been discovered with this transit method.

A similar technique, called transit spectroscopy, might enable astronomers in the future to scan the atmospheres of exoplanets for gaseous indicators of life.

And so you can see that earthly astronomers have come to use transits of distant exoplanets in front of their stars to learn not only that the planets exist, but also to begin the search for what is called biosignatures – indicators that some planets might be living worlds.

If our astronomers are doing that – looking toward distant stars and exoplanets – is it possible extraterrestrial astronomers might also be watching for transits?

That’s the premise of two astronomers at the Max Planck Institute for Solar System Research in Göttingen and from McMaster University in Canada, who described their process this week:

In a first step, the two researchers identified the region in the sky from which one sees the transits less than half a solar radius from the center of the solar disk. The possible exoplanetary systems that offer this perspective are all located in a small strip in the sky, the projection of the Earth’s orbit around the Sun (the ecliptic) onto the celestial sphere. The area of this strip amounts only to about two thousandths of the entire sky …

Not every star is equally well suited as a home of extraterrestrial life. The more massive a star, the shorter is its life span. Yet, a long stellar life is considered a prerequisite for the development of higher life forms. Therefore the researchers compiled a list of stars that are not only in the advantageous part of the sky but also offer good chances of hosting evolved forms of life, that is, intelligent life.

The researchers compiled a list of 82 nearby sunlike stars that satisfy their criteria. This catalogue can now serve as an immediate target list for SETI initiatives.

But astronomers are far from knowing every star in our Milky Way. The more distant a star, the dimmer its light appears. And the small, particularly long-lived stars are also particularly faint. In order to estimate how many stars in addition to the 82 nearby ones could reside in Earth’s transit zone, Heller and his Canadian colleague Ralph Pudritz projected the celestial sphere onto a model of the stellar density of our galaxy.

The result: about 100,000 nearby stars could harbor planets with inhabitants who could have discovered us and who could be trying to contact us. 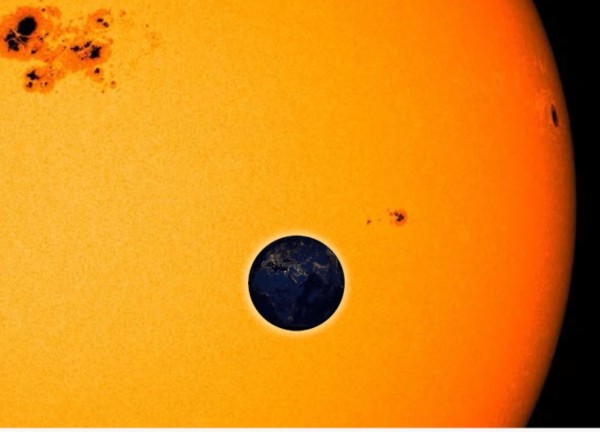 Artist’s concept of an Earth transit in front of our sun, when the Earth passes in front of the sun from the perspective of someone on another planet. When Earth transits, it blocks a small part of the sun’s light. Potential observers outside our solar system might be able to detect the resulting dimming of the sun and study the Earth’s atmosphere. This transit method helped to find most of the 2000 exoplanets known to us today. Image via NASA/Axel Quetz (MPIA).

Bottom line: Two astronomers at the Max Planck Institute for Solar System Research in Göttingen and the McMaster University in Canada think we should look for advanced alien civilizations along the extension of the band of the ecliptic or plane of Earth’s orbit around the sun. Any alien astronomers on distance exoplanets in this band of sky would be able to see Earth transit the sun.